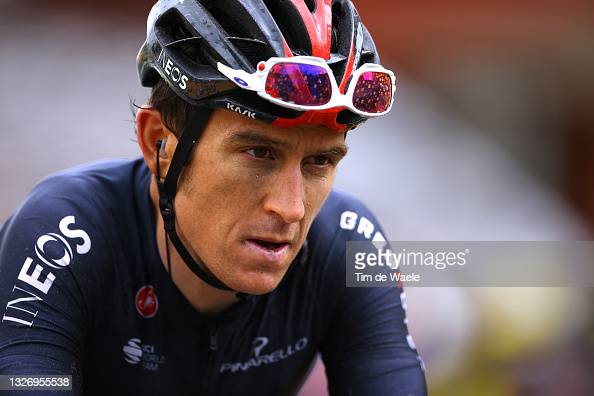 Geraint Thomas admits his head was ‘in a bucket’ after he saw his Tour de France hopes go down the pan when losing 35 minutes in the Alps on Saturday.

The 2018 champ looked poised to quit the world’s greatest cycle race to switch his focus to the Tokyo Olympics and rest the shoulder he dislocated five days earlier.

But after showing signs of improvement on the final day in the Alps on Sunday, Thomas is ready to carry on for now as a support rider to Ineos Grenadiers team-mate Richard Carapaz.

But even if he decided to leave early to focus on Tokyo, Thomas insists this will not be the last time he is seen at Le Tour.

“There’s no pressure on me now here, so I’ll just make the most of it. I’ve not got many more Tours in me really, (I’m) 35 now,” said Thomas on Monday’s much-needed rest day.

“It’s not the last. My contract is up this year and I’d like the Paris Olympics (2024) to be a final big goal, so maybe three more years. Certainly a couple more Tours in there.”

Thomas was clearly struggling on Saturday as any hopes of overcoming the heavy crash and challenging for another Yellow Jersey were shredded as he came home fourth last on the stage.

“My head was in a bucket,” admitted Thomas, who could have been forgiven for quitting then to give his mind and body a chance to rest before heading to Japan where he will line-up in the time trial and road race.

“I think if I hadn’t bounced back as I did yesterday it would be more of a discussion.

“But it’s the Tour and I didn’t want to just leave, but at the same time it’s the whole Olympics thing, weighing up what’s best.

“It’s six and two threes I guess, staying here, with the massage, physio, chef, I can go easier some days and go harder some days.

“The only thing is the quick turnaround from travelling out there basically.

“I think I just fight and go deep with everything really, out in the bike race or out on the piss.

“I’m not one to sort of give up easily and if there’s ever a chance to maybe get better.

“Starting the stage [nine] I thought it was going to be the same as the day before. You fight and give it everything and you can turn it around and come out better.”

Thomas will take to the start line in Albertville on Tuesday lying 28th overall, 39 minutes 42 seconds down on defending champ Tadej Pogacar of Slovenia.