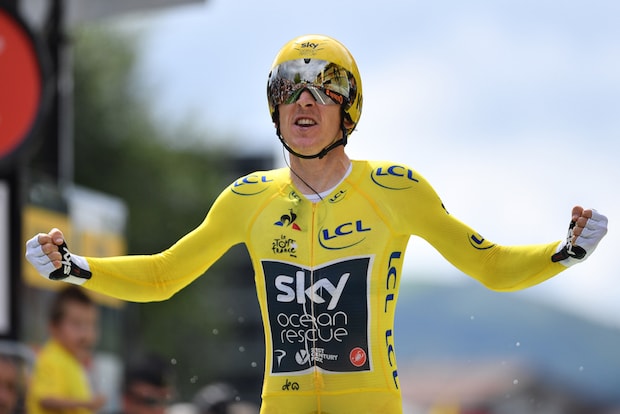 Geraint Thomas would love to add a second Yellow Jersey to his collection. Pic: Getty Images.

Geraint Thomas has been told that 2021 does not have to be his last shot at a second Tour de France title.

The 2018 Yellow Jersey winner has been told he will lead Ineos Grenadiers into Le Tour which starts in Brittany on June 26.

Thomas – currently competing at the Etoile de Besseges – will have turned 35 by then but team chief Dave Brailsford insisted the rider still has the hunger of a junior.

“I wouldn’t say it’s his last shot at the Tour,” said Thomas’s fellow Welshman. “When you get into your 30s, it’s how hungry you are and how much drive you still have inside you.

Safe to say I didn't choose this week's topic on the @gtcc_ with @gozwift…! Amateur Tom kindly chose crashes for episode 4, but somehow we ended up chatting about balls🤦‍♂️Anyone else had this problem?

“If you still have that burning desire, then you can do the training and make all the other sacrifices,” he said.

“I don’t think there’s a physical component to it – it’s more of a mental thing.

“We spoke just before (the start of) Bessèges, and he was super excited, he couldn’t wait to start, he was like a junior again. Absolutely it’s possible.”

Last year’s Tour, which Thomas missed, was won by a 21-year-old in Tadej Pogacar.

And the team still see Thomas as being a key part of their future and look set to offer hi a new deal when his contract runs out at the end of this season.

Thomas has been with Ineos since the team’s inception in 2010 and as well as Le Tour, has also won the likes of the Critérium du Dauphiné, Paris-Nice and E3 Harelbeke.

“We’re in discussions,” added Brailsford. “For someone like Geraint who has been with us since the start, he’s a very important rider to us, very influential in the group and a great role model.

“He’s somebody we’d certainly like to end his career with us, whenever that may be.”

Thomas and teammate Owain Doull both finished in the main pack in the same time as Belgium’s Timothy Dupont who won a chaotic sprint on stage two of the Étoile de Bessèges.