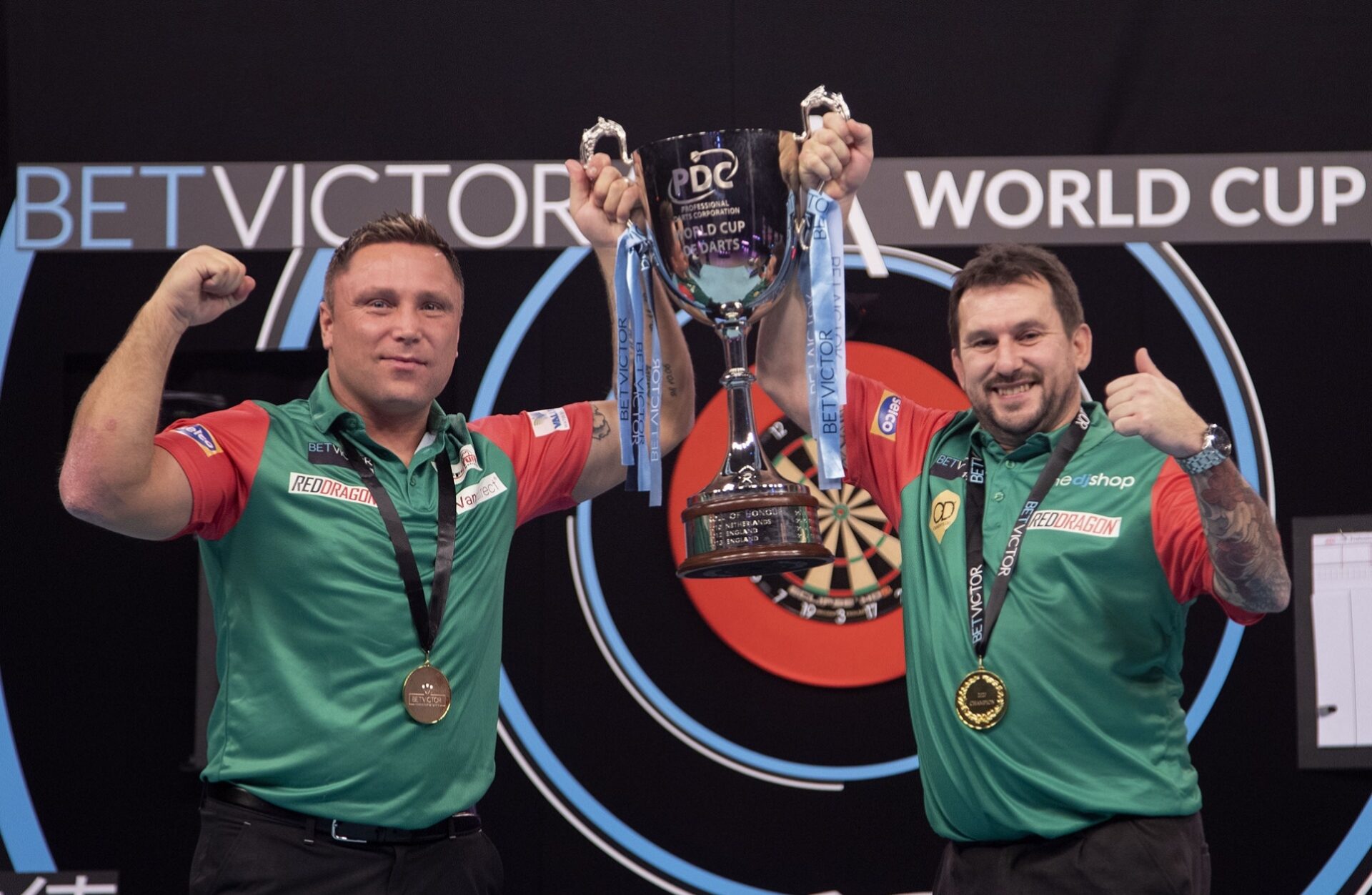 Wales' World Cup winners Gerwyn Price and Jonny Clayton will take each other on in the World Grand Prix Final. Pic: PDC.

Defending champion Gerwyn Price set up an all-Welsh final at the World Grand Prix with a stunning 4-2 comeback victory over Stephen Bunting.

World number one Price will meet compatriot Jonny Clayton in Saturday’s final in Leicester, but only after battling past Bunting in dramatic fashion.

The 36-year-old reigning world champion trailed by two sets and returned to the oche late, complaining of twinges in his throwing arm.

The former professional rugby player had looked out of sorts and struggling for rhythm, but after the extended break, returned a different animal.

You don’t want to miss this! Who will be crowned the @BoyleSports World Grand Prix Champion? pic.twitter.com/6mNp3i0T3k

The dispensation to return late after two sets proved pivotal as Price clicked into gear to turn the contest on its head.

“I had a little bit of trouble with my arm, I was struggling for movement,” Price told Sky Sports.

“I just needed an extra five minutes, and that was it.

“I felt a little bit better after I came out.

Well done @Gezzyprice! I’m glad you won the game. No offense, Stephen Bunting. The crowd were a disgrace. Gerwyn Price deserves more respect in my opinion. Good luck against Jonny Clayton in the final #WorldGrandprixDarts #darts

“I was just plodding along trying to scrape legs.

“I wasn’t playing particularly well, but dug in to the end.

“It was one of the worst performances I’ve had, the crowd was on my back; that was tough.

“I was down and out but I had to give myself a kick up the backside and get out there.

“I thought I was probably going to lose but I dug in and found some decent darts.”

Buzzing absolutely buzzing, can’t wait for tomorrow. Been an amazing week, one game to go — pic.twitter.com/AZvBU3S1UI

Clayton had earlier thumped Danny Noppert 4-1 to tee up the showdown with Price.

The Ferret racked up six consecutive leg victories to book his place in the final and move up to a minimum world number 11 ranking.

Clayton then admitted he had already considered what it would mean to claim that maiden triumph.

“That’s what we came to do and I’ve got there. So, fantastic.

“I came back and nicked that one – and that’s what made the difference.

“Danny’s fantastic and I’m chuffed with that win.”