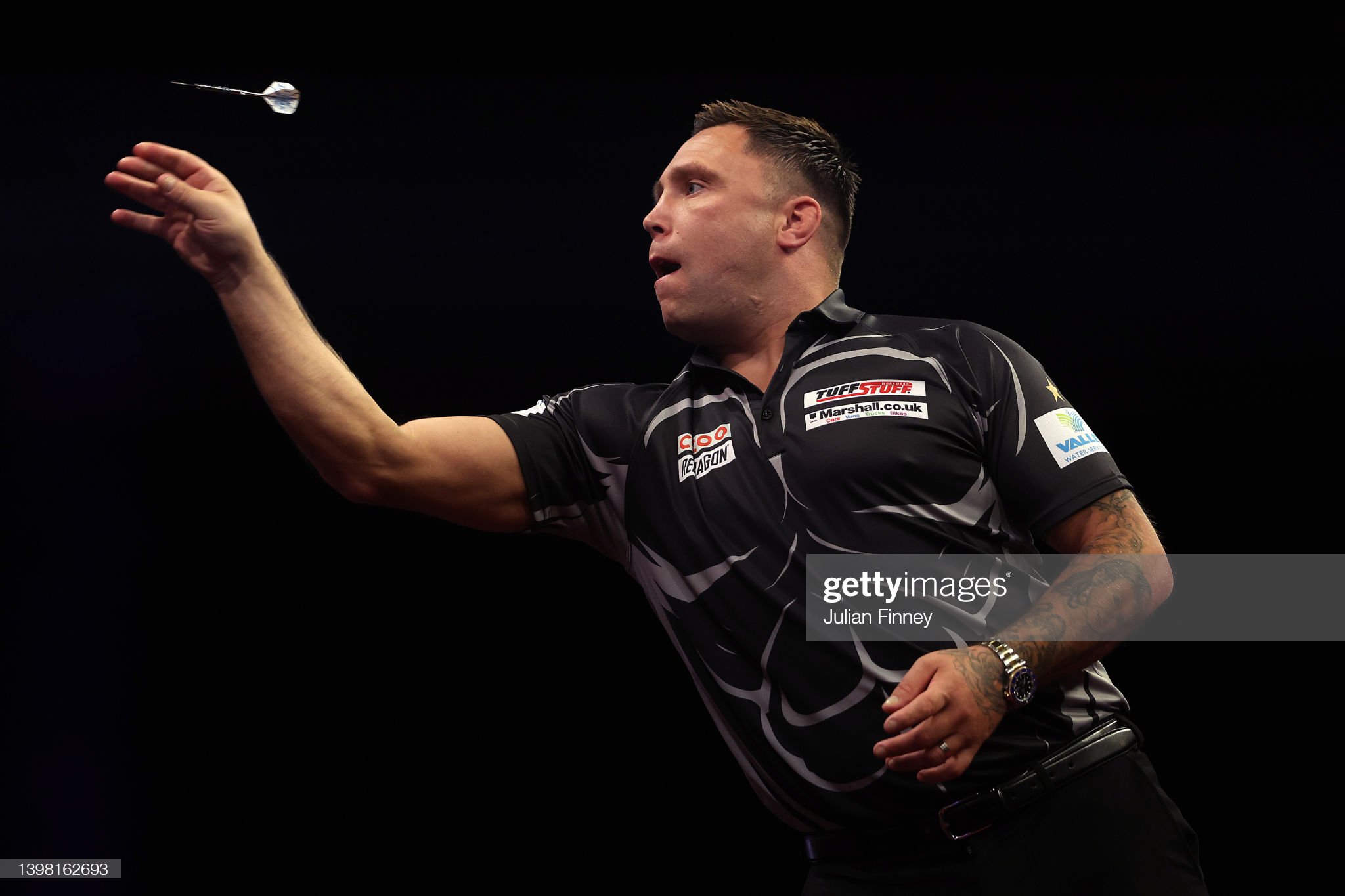 Gerwyn Price will bid to secure his place in the semi-finals of the PDC Betfred World Matchplay Darts on Friday night when he takes on Portugal’s Jose De Sousa.

De Sousa had to fend off a spirited comeback from England’s Rob Cross, the 2018 world champion and 2019 World Matchplay champion.

After overcoming Chisnall, Price said: “It was a good match towards the end for me.

Blinder of a match between Dimitri Van den Bergh and Peter Wright.

“I was frustrated early on but thankfully got over the winning line. I played well in patches but there’s plenty more in the tank.”

Van Den Bergh, the 2020 champion at Blackpool, prevailed 16-14 in a Winter Gardens classic to knock out the world number one at the quarter-final stage.

The two players are great pals and Van Den Bergh stayed at Wright’s family home in Suffolk when darts went into hibernation in 2020 due to the coronavirus pandemic.

But there was little friendship on the oche with ‘Snakebite’ sprinting into a 5-1 lead after the Belgian had hit the first of 11 180s in a winning opening leg.

Had to ask Gerwyn Price about 'that' lookalike video with Fallon Sherrock 🤣@Fsherrock pic.twitter.com/uxPjjtNlin

Wright, sporting a green Mohican haircut, refused to give in however and reduced the deficit to 12-7.

The Scot then won six legs on the bounce to recapture the lead, but Van Den Bergh regained his composure to reach his third-straight World Matchplay semi-final.

“I didn’t know what to do,” Van Den Bergh told Sky Sports after falling to his knees in victory.

“I was 5-1 down and I thought it was going to be a repeat of the final last year.

“But all of a sudden I got back in the game… and now I’m in the semi-final.”

Michael van Gerwen will meet Van Den Bergh in the last four after a 16-14 victory over Nathan Aspinall.

Another cracker here on Day Five of the @Betfred World Matchplay as Gerwyn Price sees off Dave Chisnall to reach the Quarter-Finals!

In the early stages the contest was a far more sedate affair than the fireworks which had preceded it as two-time champion Van Gerwen produced some ruthless finishing.

Games went with throw until Van Gerwen, World Matchplay winner in 2015 and 2016, broke in the eighth leg for a 5-3 advantage.

Aspinall produced a brilliant 164 checkout and won another leg with a bullseye finish as the gap was cut to just one.

But Van Gerwen, who had missed three match darts in the previous leg while facing boos all around the Winter Gardens, held his nerve to clinch victory with a magnificent 146 finish.

The next two quarterfinal contests on Friday night will determine the semifinal lineup for Saturday. Danny Noppert, the UK Open champion, will begin the action against Dirk van Duijvenbode, his Dutch World Cup of Darts partner, before Gerwyn Price, the second-ranked player in the world, takes against Jose De Sousa, a previous Grand Slam champion.

In the second quarterfinal on Thursday, Van Gerwen put on a polished performance to defeat the usually tenacious Aspinall, who rallied from an 11-4 deficit to make a historic comeback attempt. Van Gerwen, though, was unstoppable and produced a magnificent 146 checkout on double 13 to secure the victory and maintain his chances of winning the Phil Taylor Trophy for a third time.