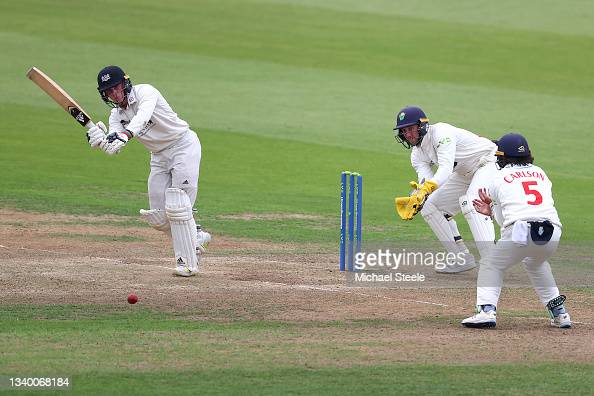 Glamorgan coach Matthew Maynard believes the Welsh county can go out with a bang as they take on Surrey at The Oval next Tuesday in the LV= Insurance County Championship.

Gloucestershire beat Glamorgan by 10 wickets on Wednesday with two sessions to come as Zafar Gohar Khan finished with 6-43 at Cardiff but Maynard doesn’t believe it to be a “true reflection” of the season.

“Obviously, the way in which the last few results have gone, and this defeat, doesn’t help. I have never known such a topsy-turvey season in terms of our performances.” said Maynard.

“We were really good in the first 10 games and played some good cricket against tough opponents. The T20 competition was a disappointment, with Marnus Labuschagne ruled out for four games and the form of some key players, and we haven’t knitted back together as a group after The Hundred.

“It has been tough emotionally for everyone at the club, but you also have to remember that we have created history with the first team to win a knock-out cup.

“People always remember the back end of a season, but I don’t think it is a true reflection of the whole campaign. But now we have an obligation to the supporters, the club and the players themselves to try to turn things around at The Oval.”

Glamorgan captain Chris Cooke is also determined his team exit the season on a high note against Surrey.

“We are really disappointed as a group not to deliver again,” admitted Cooke.

“We got a decent score having been put in, but we didn’t bowl at our best. 400 was a bit too much for us and then we had an awful session. One bad hour really killed the game for us.

“We have got to pick ourselves up. This game is all about resilience and fighting and we have a good record in the last game of the season since I’ve been at the club with six wins and three draws out of 10.

“If we can take a good win into the winter it will be nice. There are individual things we all have to try to put right before we go into that last game at The Oval.

“It is going to be a really big game for us. There have been some really good things for us this season and then we have had a shocking three weeks.

“We did really well to get into the second division and won the one day cup. We are just not playing to our potential at the moment and we are missing a few key players.

“In our final game we need to remember the things we have done well this summer, and the fact we have won a trophy, and come up with a better performance to take something into the winter.”

Head coach Maynard wants his team to be far bolder when they play their final game at The Oval.

“Our bowlers got deep into their overs, but Gloucestershire batted very well. They had a career best from their No 9 (Tom Price) and their last two also batted well to get them well over 100 run for the last two wickets and we couldn’t seem to prise them out,

“We were a bit too cautious against their spinners when we batted again. We have had games this season where we have lot wickets in clusters in poor sessions and that has cost us the game.

“We need to have a look at that. It comes down to having confidence to playing in your particular way as a batsman.”

Congratulations to Gloucestershire who win by 10 wickets

Our final match of the season is against Surrey on Tuesday

It took Gloucestershire a mere 78 minutes to polish off Glamorgan on the fourth and final day of their LV= Insurance County Championship Division 2 match at Sophia Gardens and head home with 22 points to move into second in the table.

The Welsh county resumed on 57-6, still 43 runs behind the visitors, and they were obviously intent on not falling to a third successive defeat by an innings. The overnight batsmen Dan Douthwaite and Andrew Salter didn’t hang around as they attempted to close the gap and force Gloucestershire to bat again.

Salter immediately attacked the visiting hero of the previous day, Zafar Gohar, and picked up 10 runs in the opening over of the day. He took six off Ryan Higgins next over and seven off Zafar’s second to give his side an impressive start.

But his flourish was all too brief and Zafar took his fourth wicket of the innings in the 32nd over when he trapped Salter LBW for 19. A mere 14 balls later, Ruaidhri Smith became his fifth victim as Glamorgan slumped to 94-8.

Smith attempted a reverse sweep off the left arm spinner and found himself bowled around his legs having added only four runs. Now it was just a case of whether or not the home side’s tail to haul them over the line to prevent another embarrassing innings defeat.

Douthwaite was the next to fall, bowled by Higgins as he became the Gloucestershire seamer’s 50th championship victim of the summer, and that left Timm van der Gugten and Michael Hogan needing to score eight runs to make Gloucestershire pad up again.

To their credit, they put on 22 for the final wicket, the third highest partnership of the innings as Glamorgan moved on to 124. Zafar finally removed Van der Gugten to end with 6-43 from 18 devastating overs, although not before the home batsman had hit him for two big sixes.

On one of those he was caught by Higgins as he ran towards the rope, but then failed to stop. When it happened again, Higgins took a wonderful catch and threw it over his shoulder for Graeme van Buuren to complete the dismissal and leave Gloucestershire with a target of 15 runs to win the game.

Glamorgan opened with two spinners, Salter and Kiran Carlson, and it took nine balls for skipper Chris Dent and Miles Hammond to complete the triumph at 11.48am.]