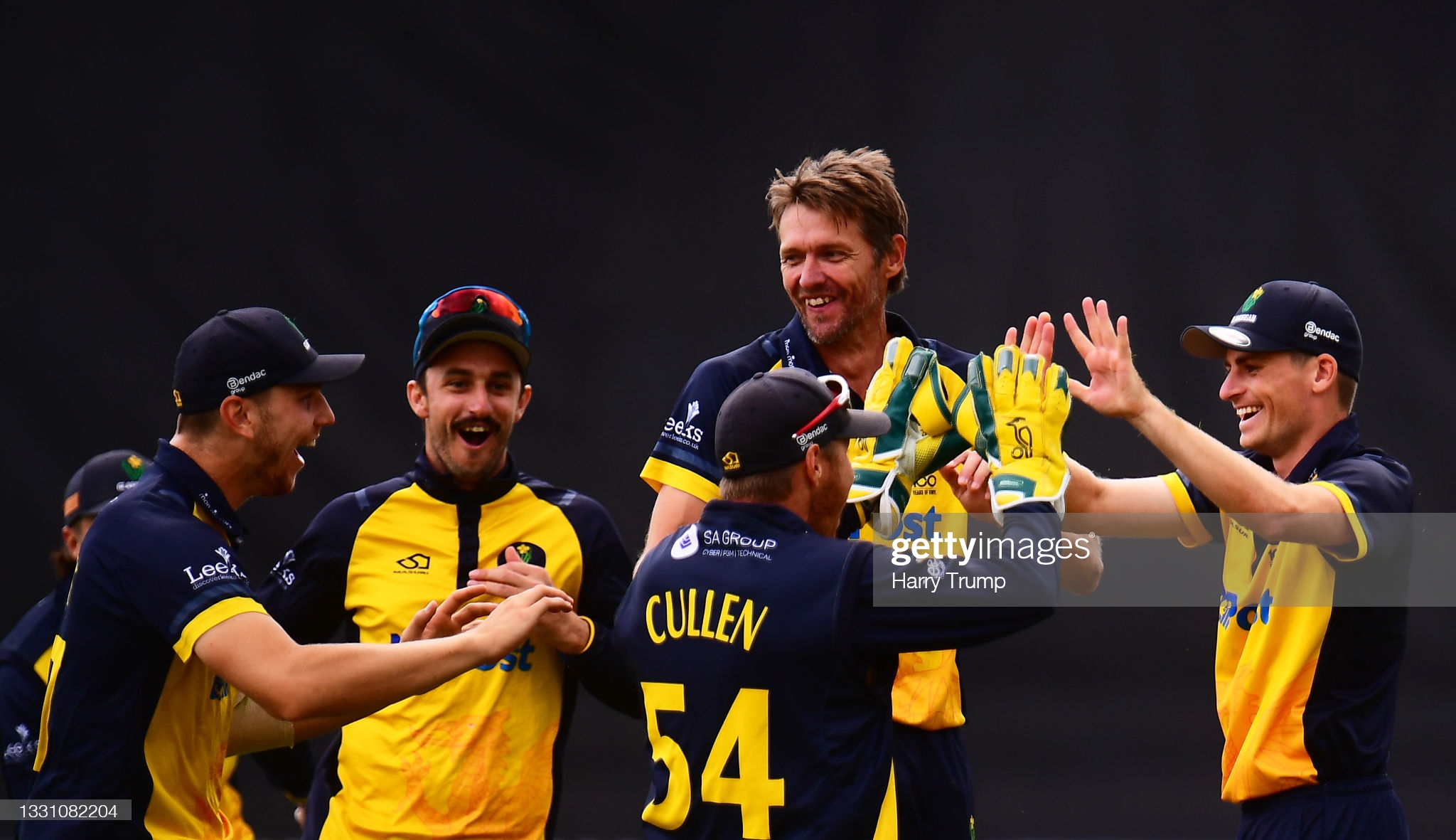 Glamorgan coach David Harrison was full of praise for the way in which his side put themselves on the verge of qualifying for the knock-out stages of the Royal London Cup with a comprehensive eight wicket win over the Notts Outlaws at Sophia Gardens.

“The boys were fantastic. We’ve bowled well all competition and to knock off only 73 runs has made us very happy,” said Harrison.

“We saw that the pitch had been used on Friday for the Welsh Fire game in The Hundred and had been under cover for a few days, so we thought there would be a bit of moisture in the pitch if we bowled first.

“The boys were fantastic in getting them all out for 73. We’ve done well in getting early wickets in the power play and that is a great win for us.

“We will be ready for Yorkshire on Thursday. If we win there is a good chance that we will finish top of the table and that is our aim.”

Notts Outlaws’ head coach Peter Moores was quick to thank former international umpire Ian Gould for the way he dealt with one of his young batsmen, Lyndon James, after he got hit on the helmet by paceman Joe Cooke.

The 22-year-old James played a couple more balls after receiving treatment following the blow before Gould called on the medical team for a second consultation.

James then retired hurt on 3 and left the field to allow Sam King to became his county’s first concussion substitution.

“Historically players have always felt a bit of pressure to maybe stay in the game. You don’t want to let you mates down in a team game,” said Moores.

“There is a clear protocol that you have to go through these days and if that suggests the safest thing is to step away from the game then that’s the right thing to do.

“It was very experienced umpiring and straight away he called the phsyio on, which was the right thing to do. We have to put the players welfare first.

“Lyndon will go through the normal protocols now and step away from the game for the next six or seven days. He’s a great kid who loves playing and he felt OK when he came off.”

First placed Glamorgan next host second placed Yorkshire on Thursday in a game that will ultimately decide the group winner.

Umpires Ian Gould and Neil Mallender made three inspections of the Sophia Gardens pitch and outfield before finally declaring play could start at 3.00pm as a reduced overs game.

The game was reduced from 50 to 23 overs and after winning the toss the Glamorgan skipper Kiran Carlson invited the visitors to bat first.

Ben Slater took a boundary over the covers in the opening over before Michael Hogan, who had removed Surrey opener Mark Stoneman with his first ball five days earlier, struck with his second ball to take out Sol Budinger.

Lukas Carey picks up his first wicket of the day as Slater is trapped LBW for 9!

Budinger skied a catch that wicketkeeper Tom Cullen comfortably dealt with and then fellow opener Ben Slater fell LBW to Lucas Carey in the next over.

By the end of the first power play of five overs the Notts Outlaws were 19-3 with Matt Montgomery also back in the hutch and the Glamorgan seamers very much on top.

Lyndon James survived a sharp chance at point to Andrew Salter, but then took a nasty blow on the helmet from James Cooke. An over later, on the recommendation of the umpires, he retired hurt and was replaced in the match by concussion sub Sam King.

His departure brought Liam Patterson-White to the wicket, but he didn’t last long, sent back to the pavilion courtesy of a spectacular one-handed catch by Steve Reingold at short midwicket off Cooke

The, when Glamorgan turned to spin, Salter clean bowled Peter Trego for eight in the ninth over.

Dan Schadendorf was caught in the deep trying to hook Cooke to leave the Outlaws reeling at 31-6 and when 17-year-old academy star Fateh Singh struck the returning Hogan to the boundary in the 14th over it was only the third 4 of the innings.

Hogan’s response was to clean bowl Brett Hutton, but Singh brought up the 50 in the 16th over with the first of two successive boundaries before departing for a combative 21 in the 18th over.

James Weighell then mopped up the tail to end with 3-7 as he removed King and Dane Paterson with successive balls in the 21st over.

That left Glamorgan with a modest total to chase and they ended the first Power Play of five overs on 26-0 before New Zealand Test star Hamish Rutherford spooned back a catch to pace bowler Dane Rutherford the very next over.

Carlson smashes the ball away to the boundary to seal the victory!

Nick Selman steered the home side through the 50 mark in the 12th over. Steve Reingold was trapped LBW to Liam Peterson-White in the 16th over and that allowed home skipper Kiran Carlson to come in and hit the winning boundary two balls later.