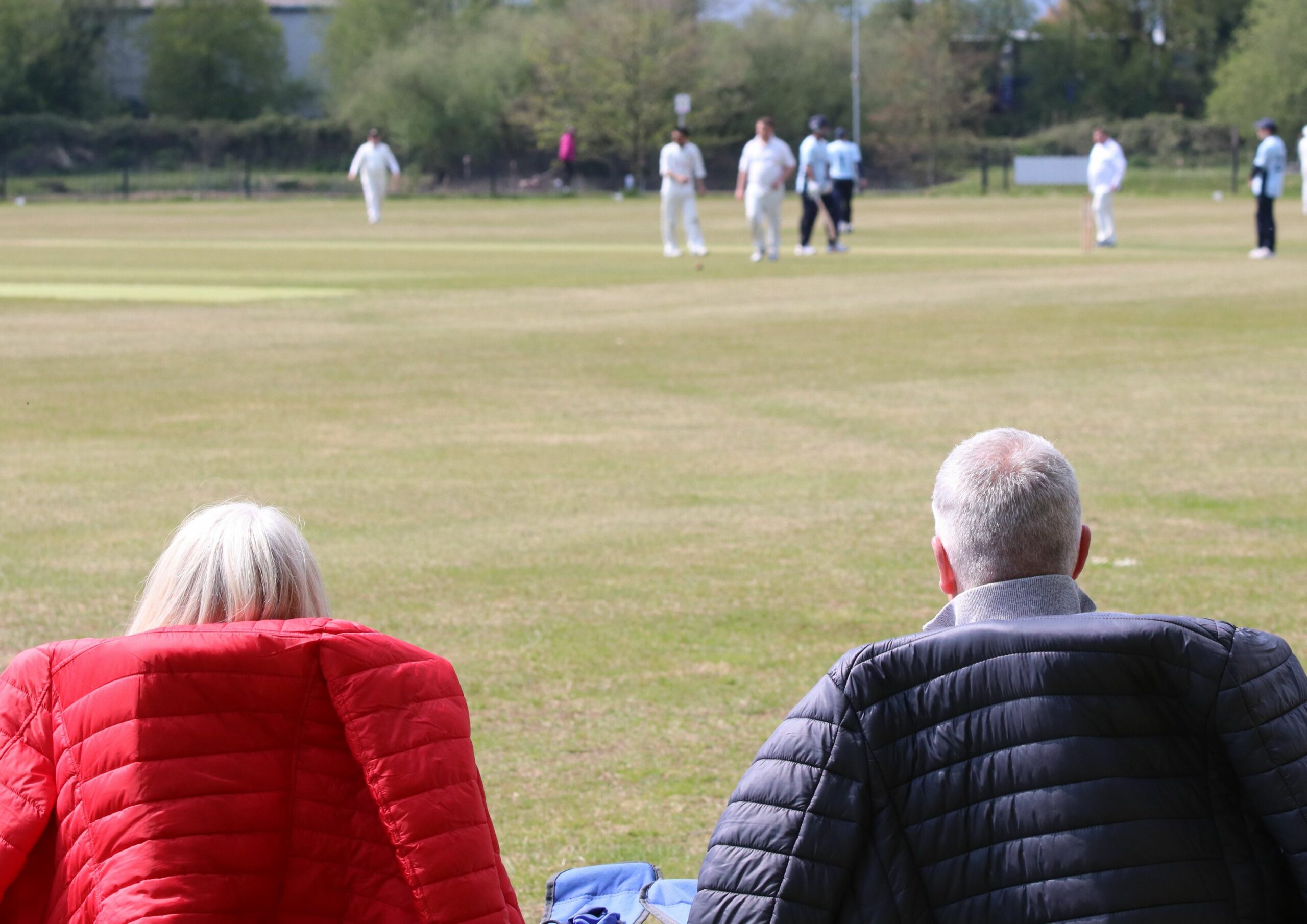 It may have been sunny for the return of league cricket at the weekend but the puffer jackets were still on hand just in case. Pic: Owen Morgan.

Cricket is back. Two years since Welsh league cricket was last here, clubs up and down the country have returned to their grounds for competitive action. On Saturday, Newport – South Wales Premier League champions in 2019 – hosted Mumbles and Owen Morgan was there to see it.

The sun was shining, senior league cricket was back and all seemed well with the world in Newport on Saturday afternoon.

Even the first cuckoo I’ve heard this year joined in to complete the idyllic scene at Spytty Park, which was being replicated at cricket grounds around the country.

There was rain later in the afternoon. Of course there was rain; it wouldn’t be cricket in Wales without it, would it?

But not even some heavy mid-afternoon showers could dampen the spirit on Saturday. Cricket was back and the grand old summer game was bringing people together again.

Mumbles and Newport couldn’t be much further apart in so many ways. One a city forged from its industrial past, the other a picturesque seaside village.

Even geographically the two communities are miles apart, but as the West Wales team’s players climbed out of their cars after their long journey east, you could sense the atmosphere of anticipation in the air.

As play got underway with the visitors batting first, Newport committee member Dave Knight was delighted to see league cricket being played once again on the club’s immaculate ground, which also hosts Glamorgan county matches.

“It’s just nice to see everybody out there playing, in their kit, you know?” said Knight, whose twin brother Mike is club chairman.

“It’s the first league game for nearly two years because last year we didn’t play any league cricket at all.

“We have had a couple of warm-up games. But to have that competitive edge back in the league, it’s great. We’re looking forward and the ground’s looking a picture as well.

“Fingers crossed it’s not going to rain, there’s a few showers forecast, but I think hopefully, we’ll be alright.”

The fixture was being played in Division One of South Wales Premier Cricket League – a high standard of cricket strengthened by first class talent including Glamorgan county players.

But league cricket returned on Saturday at all levels with Newport’s fourth team also hosting a fixture on an adjoining pitch.

The excitement of a return to competitive cricket is just as keen, if not more so at the lower levels of the game, said Knight.

“Normally with four teams it might be a bit of a struggle to get players out and you’re scratching around looking for an eleventh man.

Mike & Dave Knight cross the Usk with the Queen’s Baton on its way to The Commonwealth Games in Australia 2018. pic.twitter.com/NFVtGq3iFT

“This week, we could literally run five teams – they’re coming out of the woodwork! They just want to get out and do a bit of cricket.

“People who haven’t played cricket for a few of years, are coming back to play. There’s all sorts of things, you know, things that can only be good for the game.”

However, as we chat, the fall of a Mumbles wicket illustrates that although competitive cricket is back, things aren’t quite the same as they were.

As the visiting batsman trudges to the boundary, hand sanitiser is passed around the Newport fielders who rub the liquid vigorously into their hands.

It’s just one of the new features teams will have to get used to in order to carry on playing.

Knight said: “For this level of the game, it’s not too bad. Obviously, you’ve got sanitising breaks every six overs. Thankfully, fielding is socially distant anyway.

“But we’re not allowed to use the pavilion. So that’s always a shame. And for our matches there’s no teas, players just bring along their own.

“Normally, you have two sets of teams using changing rooms in the pavilion and the bar will be open. So that’s a big, big change for the club and makes it financially difficult as well.

“Going up a level of games, we’ve got Glamorgan seconds playing their full fixture list here this year. And they have to jump through hoops and red tape to get the ground Covid-secure.

“We’ve got to fence one ground off and Glamorgan will be in their bubble. No one’s allowed in and the groundsmen have got to have special passes, all those types of things.

“I think they’ve got five four-day matches against the other counties in their championship. So we’re fortunate in that they’ve come here to play their games here, they would normally probably be dotted around a bit.”

Knight says despite the excitement surrounding the return of league cricket, some players have been lost from the game due to the break.

“A few people have dropped out of the game. It’s been a long, long time since they’ve played.

“It was competitive cricket last year but it wasn’t the South Wales Premier League and people didn’t have much interest in it to be if I was honest.

“A few played and a few didn’t. This year, most of them are back, but a few have gone by the wayside. And I’m sure lots of clubs will find the same.

Even though there has been little club cricket action aside from friendlies since the end of 2019, clubs have still had to keep their playing surfaces in good condition.

“One of the issues as well is that you’ve got to maintain the ground, because you can’t just leave it,” says Knight, who also coordinates the thriving juniors section at the club.

“So it was a bit daunting, preparing the ground, maybe not quite to match standard, but certainly to a good level, because you’re always hoping they might lift the ban, particularly last year.

“So we couldn’t neglect the ground, we always had to get the ground up and running with that goal. Glamorgan were due here in August last summer for two one-day matches against Yorkshire and Notts, which were big games.

“But as things developed, they could only play on their county grounds. So those games here were cancelled. That was a massive loss for us as a club. As it turned out, it was the hottest weekend of the season.

“It was absolutely boiling, we’d have had probably 2,000 or 3,000 crowds here but there was nothing we could do about it.”

One recent positive is that the league was originally due to re-start on Bank Holiday Monday, which typically is forecast for heavy rain.

Although there were some weather disruptions on Saturday, most matches at least saw some play.

Mumbles certainly made hay while the sun shone on Saturday.

After initially being reduced to 7 for 3 after four overs, they eventually posted 275-9 from their 50 overs. Newport replied with 254-9 from their allocation, giving the visitors a 21-run win.

However, cricket was the big winner on Saturday as players all over the country returned to action.

Despite all the disruptions of the past and the hurdles which may lie ahead, Knight is just happy to see league cricket being played once again and hopes it can continue in a safe environment.

“We’re just hoping that now we’ve got the green light, there’s not going to be any hiccups on the road. And, you know, we’ll be all right.

“It is a real case of being as careful as you can possibly be in keeping things secure.

“We try to respect all the issues as best as we can. We’ve got all the signs up around the place and everything else. All of our players have been firmly told about the restrictions, and hopefully with common sense we’ll get through it all.”