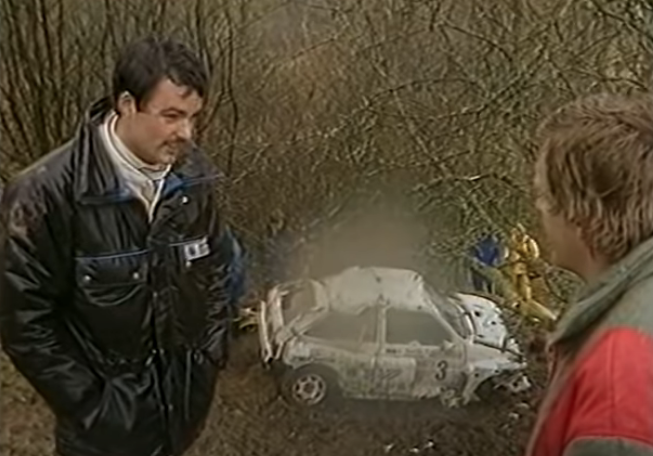 David Llewellin being interviewed by Steve Rider after his massive accident on the 1986 Welsh International Rally.

With rallying currently still stuck in a ditch as other sports in Wales start to resume, past glories are all that’s on offer. So, the perfect excuse to hear from Wales’ swashbuckling former British Rally champion David Llewellin, who tells Paul Evans of his infamous highs and lows chasing the Welsh International Rally title.

The most spectacular of these, beyond limits misdemeanours, came in 1986, when he crashed his Metro 6R4 not once, but twice.

It’s a car-wrecking weekend that Llewellin – who recently celebrated his 60th birthday in lockdown on his Pembrokeshire farm – remembers only too well.

On an event that starred rally legends such as Hannu Mikkola, Stig Blomqvist, Jimmy McRae, Russell Brookes and Mark Lovell, British Rally Championship leader Llewellin, full of confidence from victory on the Circuit of Ireland, had said before the start that he’d either win or he wouldn’t be at the finish in Cardiff at all.

That was proper old school ‘bin it or win it’ fighting talk!

Llewellin made a dream start, annihilating the opposition and opening up a huge lead.

But then it all went wrong – at a famous motorsport range that he didn’t like before, certainly didn’t like then, and hasn’t much liked since.

“We went in to a stage on Epynt almost a minute in the lead,” recalls Llewellin.

“The first time I did Epynt – in the dark, on my first Welsh International – was in 1982, and I was caught and passed by Mal Stuart four miles in to the stage.

“That was the first and only time in my career that another competitor has done that to me, without having a problem with the car, of course, on a rally. So, no wonder I don’t like the place!

“We didn’t have pace notes back in those day and I didn’t know Epynt when I went back there for the 1986 event.

“We were a little late in to an apex, caught some gravel on the outside of a corner and as the Metro had a short wheel base the car swapped ends instantly and we spun into a ditch at about 80 miles an hour.

“We got out of the ditch fairly sharpish, but we lost the lead – finishing the stage with a wheel missing. The team put new bits on the car, but it never really handled the same after that.”

Against such a world class field, thoughts of victory should have been over – but Llewellin and co-driver Phil Short fought back magnificently to put themselves back into contention with just a handful of stages remaining.

“We regained a lot of time and were only ten seconds behind Hannu Mikkola going into Brechfa forest – and with only a stage at Pembrey between us and the finish, we had to keep pushing hard to try and win it.

“The first part of the stage wasn’t on the map, so we were driving blind.

“There was a corner that went around the side of a hill. I thought about easing off, but as it looked like it opened up I kept my foot in.

“Unfortunately, the corner tightened into a hairpin, and there was no way we were going to go around a sharp corner like that at the speed we were travelling.

“I threw the car sideways to try to slow it down, but it caught the grass in the middle of the road and we were launched off the side of the hill.

“After rolling several times down a bank and through some trees, we came to a halt upside down.

“The doors were jammed and we couldn’t open them and there was petrol dripping into the car from a split fuel tank – but, luckily, spectators were quickly on hand to roll the car back over and help get us out.

“I remember saying ‘let’s get it back on its wheels and get going again, boys!’ but someone said that the car didn’t have any wheels!

“I must have been in shock and not thinking too clearly.

“Mind you, I shouldn’t have said at the start of the event that I’d either win or I wouldn’t be coming back to the finish in Cardiff.”

In its heyday, the Welsh International Rally was a massive event, attracting over 250 competitors and tens of thousands of spectators.

Some years it started from Cardiff Castle, with an opening stage through the narrow tree-lined lanes of Bute Park – finishing by Blackweir Bridge on the River Taff.

It then headed west to the forests of Margam Park, the Vale of Neath and Brechfa, before turning north to stages like Crychan and Halfway forests  and over the infamous Tarmac rollercoaster roads of the Epynt military range, before going further north to Myherin, Hafren, Dyfi and Gartheniog.

And in the glory days of rallying, before double usage and cloverleaf routes, not one stage was used twice.

It was a difficult event to win, as Llewellin had to explain on more than one occasion.

“And by driving blind I don’t just mean without pace notes, I mean without some roads even marked on an OS map. It wasn’t that easy.”

“Your home international is always the event you want to win the most, and my desire to win the Welsh ultimately stopped me from winning the event for many years, because I was pushing too hard and had a few accidents,” admits Llewellin.

“It was sweet when that first victory came – it was a huge occasion to win it for the first time in 1989.

“I’d already won my first international rally on the Circuit of Ireland, but nothing beats the feeling of winning on home soil.

“And winning the next year was a lot easier, because I didn’t have all the pressure.”

Sadly, the last time the Welsh International Rally ran was in 1991 – the combination of an economic recession and the loss of its title sponsor, Fram Filters, put a sudden end to one of Wales’ biggest sporting events.

The event title is still owned by the South Wales Automobile Club, and the trophies – including the overall winners’ cup, with its solid silver Rolls Royce figurine – has been retired to a bank vault in Cardiff.

The trophy that gave Llewellin so much heartbreak and reward only comes out of hibernation once a year – not to be held aloft and showered in champagne, but to be polished, valued and insured.

Thirty years ago, the Welsh International cost £250,000 to organise – and with a price tag today of around £2m, the event – certainly in the format for which it is so fondly remembered – is unlikely to return.

“It’s scary to think that all that was over 30 years ago. It’s unbelievable,” says Llewellin.

“It was incredible to do a rally like the Welsh International – 80 stage miles a day, all stages used only once and the roads in beautiful condition. It was as smooth as a motorway in some places.

“Rallying in the ‘80s, when Group B was in its prime, was the best.

“It was exciting to watch, the sport was incredibly popular, there were a lot manufacturers involved and the television coverage was great.

“I was one of six professional drivers being paid to contest the British Rally Championship.

“The sport is very expensive and it’s very difficult to progress.

“Sadly, the days when a driver is paid to contest the British Rally Championship are over.”

So the famous Welsh International Rally – which started in 1935 as a road event, was bestowed with a rare act of Parliament allowing it to run an unlimited number of starters, and successfully ran as a full international event from 1964 for the next 28 years (although two events in the mid-1960s were cancelled) is consigned to the history books.

But with names such as Ari Vatanen, Hannu Mikkola, Stig Blomqvist, Pentti Airikkala, Roger Clark, Markku Alén and David Llewellin engraved on the winners’ trophy, what a magnificent rich rallying history it has.