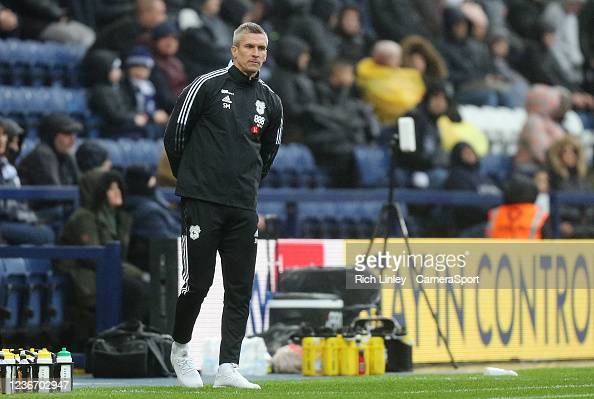 Davies scored one of the Bluebirds’ two goals in their 2-1 extra-time victory over Preston on Sunday – a victory that has set up their dream fourth-round tie at Anfield.

The 20-year-old Wales U21 player put his side 1-0 ahead before Mark Harris scored the winner four minutes before the tie was due to be decided on penalties.

It came after Cardiff manager Morison had described Davies as being more “a hindrance than a help” after sending him on as a substitute at Bournemouth two weeks ago – only to replace him within 30 minutes.

Morison had given the 20-year-old a roasting after the recent 3-0 defeat at Bournemouth when he brought him on him the 45th minute and then substituted him 30 minutes later. His reasoning was brutal – “he was more of a hindrance than a help”.

Given the chance to redeem himself, the Aberdare-born striker showed real character to hit back after missing a sitter in the 25th minute.

“I love the kid and he is a good player,” said Morison.

“He had some tough love from me at Bournemouth, but then we went through his performance and I’m really pleased for him today.

“I said what I said about him to the press, but then I also said the same thing to him in the dressing room.

“Then, we spent 45 minutes on Monday going through the video of the game and explaining to him what he did and didn’t do.

“It was tough love followed by lots of love when we sat down with him.

“The youngsters don’t have to prove anything to me because I know they are good players. They just need to be consistent week in, week out.”

The FA Cup fourth round is scheduled to be played over the weekend between Friday, February 4 and Monday, February 7.

Cardiff booked their place through Harris’s winner and then manager and player watched the draw from their dressing room.

Morison added: “You don’t get much better than that.

“We watched the draw in the dressing room together. We had a nice little celebration and it makes all the hard work the lads put in worthwhile.

“It’s a great draw. It’s going to be a fantastic occasion and something we’ll look forward to.”

Davies, 20, and 23-year-old Harris both took their respective chances in a tie of few clear opportunities which rarely rose above the mundane and was played in an empty stadium due to Welsh Government Covid restrictions.

It was a first defeat for Preston’s recently appointed manager Ryan Lowe, following two Championship victories, but they were unable to build on the momentum gained after an equaliser from Daniel Johnson which took the game beyond 90 minutes.

A penalty shoot-out looked likely until two of the Bluebirds’ other young guns, Kieron Evans and Tom Sang outpaced Preston on the break in the 116th minute and Harris showed composure to finish.

Proud moment for me and my family scoring my first professional goal, gutted the fans couldn’t be there.. see you in the next round💙 pic.twitter.com/jtI7maQd2U

Davies had already missed one golden opportunity before he scored and must have feared his manager would have another blunt verdict to deliver.

Slipped through on goal by a clever pass from Rubin Colwill, he had time to steady himself before shooting but somehow missed the target by five yards even though he was only a dozen yards from goal.

If that mistake was playing on his mind, then he could not have been accused of hiding and when he carved out his own opening four minutes before half-time.

Preston were slow to react to the striker’s presence on the left, which enabled Davies to cut inside, round a static Patrick Bauer in the visitors’ defence, and drill the ball between the legs of goalkeeper Daniel Iversen.

Cardiff might have been expected to use their lead as a platform at the start of the second half, but their poor home form has made them fragile holders of any advantage.

Preston sensed as much and they deservedly levelled through a penalty from captain Johnson seven minutes after the restart following a rash challenge by Cardiff defender Ciaron Brown.

The visitors had the better of things after that, but even though the introduction of former Swansea City forward Scott Sinclair gave them more impetus, they were unable to create clear opportunities.

Cardiff held on for extra-time and won it when a swift counter-attack ended with substitute Harris firing his shot low into the far corner.

Lowe said: “We played well in spells, but we didn’t have the finishing edge and paid the price with four minutes to go.

“It should have finished 1-1 and gone into penalties. We had dealt with their long balls really well all game, but we lacked concentration and got caught out.

“It would have been nice to have made the next round but we are not going to win the FA Cup so it’s back to Championship football.”