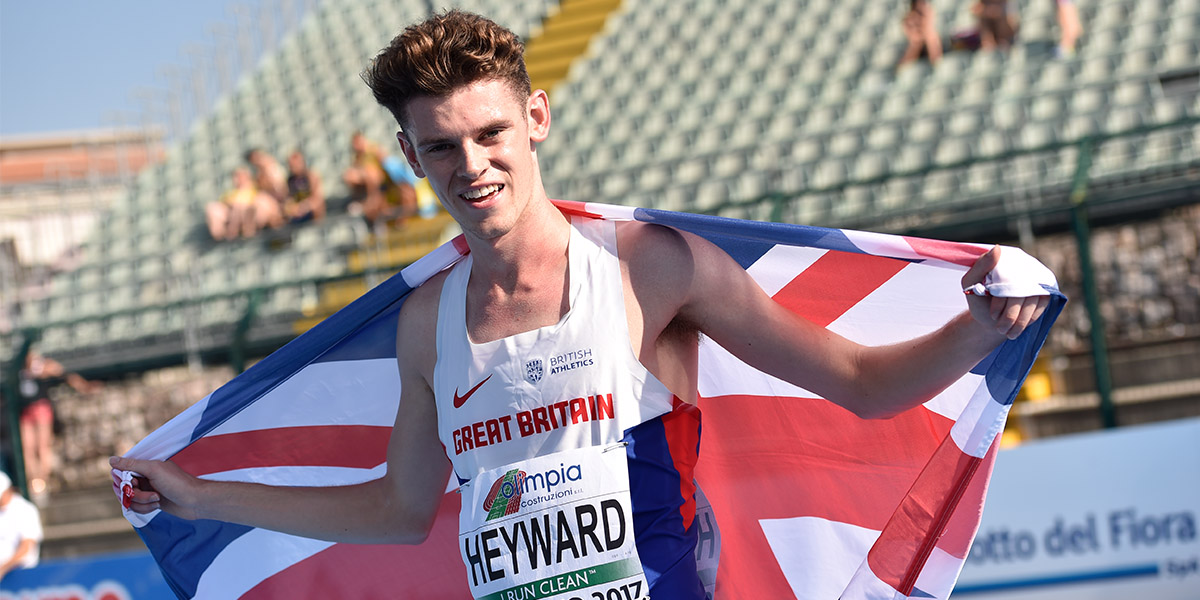 Jake Heyward will run in the 1500m final at the European Athletics Championship. Pic: Stellar Athletics.

Jake Heyward overcame feeling unwell to claim a place in the 1500m final as four Welsh athletes featured on the first day of the European Athletics Championships in Munich.

Less than a fortnight after finishing fifth at the Commonwealth Games in Birmingham, Heyward battled through to Thursday’s final as one of the fastest losers.

The Cardiff athlete took control of his heat from the start and led from the front until the closing stages when he was passed by reigning champion Jakob Ingebrigtsen.

Running out of steam in the final few metres, Heyward eventually finished fifth, lunging for the line in a bid to reach the final as one of the four automatic qualifiers.

The Welsh record holder then endured a nervous wait during the second heat to find out whether his time of 3:39.30 was fast enough.

After his place in Thursday’s final was confirmed, Heyward revealed he had been feeling unwell in the run up to the race.

“To be honest I didn’t feel very well when I woke up this morning, but sometimes you’ve just got to get on with it,” said Heyward.

“I thought ‘I’m just a bit tired from the Commonwealths’, but something wasn’t right there because I should be able to comfortably qualify. I’m through now, that’s all that matters.”

Asked what the problem was, Heyward said: “It’s just a general sense of not feeling right. As an athlete you know what your body feels like.

“I’ve slept a hell of a lot in the last few days and usually that’s a sign that something’s not quite right. But that’s ok, I’ve got two days to recover now. I’m pretty tough, I’m sure I’ll be fine.

“At the end of the day I front ran the whole thing and still got through so not bad.

“It’s relief to be honest, I got lucky as that’s not exactly how I planned it to go. It wasn’t really a good enough run but I scraped through, I’m in the final. It doesn’t matter how you get there.

NEW VIDEO: Before @OregonTCElite's Hassan Mead & @jakeheyward7 hit the track for @sound_running’s The Track Meet this weekend, we got the chance to catch one of their workouts in Sedona, Arizona.

🎬 Rumor has it @macfleet1
is still catching his breath

“When you step on the line on Thursday it’s a completely clean slate and obviously I remember my teammate last year Josh (Kerr) who almost got knocked out but went on to win an Olympic medal, so in a few days time it’ll be completely fresh.”

Swansea Harrier Joe Brier wasn’t so fortunate as he finished fifth in heat two of the 400m qualifiers.

Like Heyward, Brier had to wait to see if his time of 46.06 was good enough to be among the non-automatic qualifiers, but he was agonisingly edged out by just one hundredth of a second.

“I thought I’d executed it well – 46.06 isn’t slow, it is a decent time but unfortunately today I missed out by 0.01 which is disappointing,” said Brier who was competing in his third major championships of the summer.

“I’m not here to make excuses, but it has been a very long season, trying to qualify for the Commonwealth Games, going for Eugene (for the World Athletics Championships) and this champs.

“But I needed that race today to get my body back into the rhythm of the individual 400m, so I’m looking forward to being back here racing in the relay on Friday.

The dust has hardly settled from the Commonwealth Games, but 8️⃣ of our athletes are ready to go again next week at the @Euro_Champs 😍

Find out everything you need to know here ➡️ https://t.co/hzw3OOqkRd pic.twitter.com/2iJDhENqxu

“It’s been a pretty good season. I’ve made my first two senior teams in the individual 400m, and represented Wales at the Commonwealth Games. Me and my coach will take a lot from this season and learn as we move forward.

“I’m grateful for the opportunities I have had, so I’m not going to be too upset with the result today.”

Earlier in the day Andy Davies and Rosie Edwards had taken part in the men’s and women’s marathons on the streets of Munich where both finished 35th in their respective races.

Edwards, who helped Great Britain to a sixth place finish in the women’s team race with her time of 2:40.07, said of the race, which was run in rising temperatures: “It was a tough day and very hard, but it was about battling for the team today.

“There was such an amazing atmosphere around the course, the crowds were just going crazy which really helped me throughout the race. I was really struggling over the last 10km, so it was special to be cheered on all the way around.”

The US-based athlete added: “It was a fantastic experience to be racing along with the girls as part of a team, as well as an individual.”

Stockport Harrier Davies, who clocked 2:18.23 as the men’s team finished seventh, said: “Early on I felt really comfortable I think it just warmed up, possibly a bit more than I’d expected, especially when we were out in the open and the sun was beating down.

“But we ploughed through it and it was matter of getting to the finish line in one piece and doing it the best we can for the team.”

The veteran mid-Wales based athlete added: “I went off a little bit too quick for what I was expecting but it’s so hard to slow down with the adrenaline so I had to go with it, wait for a group to catch me up and just follow them, but the heat played a big factor.

“Going into it, I knew if I went two or three minutes slower than my PB we’d have a good chance of a good position.”

“There were loads of GB supporters and it was great to have that support all the way round.”

Tuesday’s action sees Melissa Courtney-Bryant running in the 1500m heats, while race walker Bethan Davies will contest 35km distance. Cardiff sprinter Jeremiah Azu gained a bye in the first round of the men’s 100 and will open his campaign on Tuesday evening.