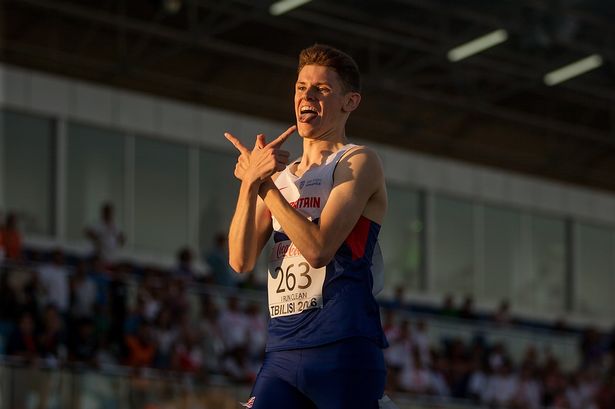 Jake Heyward will run in the 1,500m at the Tokyo Olympics. Pic: Getty Images.

Wales has already contributed to Great Britain’s early medal collection at the Olympic Games in Tokyo when Lauren Williams won a silver medal in taekwondo on Monday. For Williams, an Olympic medal was the realisation of a dream that began in her local club in Caerphilly, Devils Martial Arts Club. Graham Thomas looks at the Olympic roots of the Welsh competitors in Japan.

All Olympic dreams start with a more local idea and for Jake Hayward it was wanting to be the fastest kid at Llanishen Fach Primary School.

Twelve years on and Jake still wants to cross the line first.

But the child who raced across the tarmac as a 10-year-old Cardiff schoolboy, now aims to reach an Olympic final in arguably the Games’ most prestigious athletics event – the 1500 metres.

Hayward was the only Welsh track and field athlete guaranteed an appearance in Tokyo, before Team GB also included compatriot Joe Brier who was promoted to a place in the men’s 4 x 400m relay squad from among the small group of travelling reserves.

But for all 26 Welsh competitors across the sports – 13 men and 13 women – their stories began with grass roots sport at club and school level, which ignited their love for sport and also their ambition.

“I always knew I was pretty fast, like being fastest kid in school on the playground.

“Our primary school entered us into a local competition with the Urdd. They used to organise mini cross country meets for girls and boys in year five and six. I won that and it just spring-boarded from there.

“So, it was at primary school I started, but it was when I got to high school, my PE teacher, Dai Griffin, – he was the person that really, really encouraged me and made sure that I went down to the track.

“It was something that I was going to do anyway and go down to Cardiff Athletics, but he definitely took a keen interest in athletics.

“I first joined the Cardiff Athletics  group – Track Rats, I think it was called.

“But at that point, you’re kind of just dabbling in high jump, sprints and a bit of everything.

“Then I got entered into a competition and I got moved up to a group with a guy called Tim Fry. There were some older athletes in that group, so I started training with them for a little bit.

“And then the group above that, Paul Darney was looking after, and that had Mike Ward, Jacob Preece, Matthew Edwards, people like that, who were three or four years older than me.

No one from Wales has ever run a mile faster than @jakeheyward7 did tonight.

Another Welsh record smashed on his way to @Tokyo2020 🇯🇵

Hayward begins his Olympic 1,500m campaign in the heats on Tuesday, August 3.

Williams won an Olympic silver medal in the -67kg weight division in Tokyo on Monday after falling agonizingly close to a gold medal in the final against Croatia’s number one seed, Matea Jelic.

“My coach was Rob Taylor and I was there with Lauren Price before she went into boxing and I moved into taekwondo.

““Lauren and I grew up together and she was essentially my role model. We trained together a lot and she took care of me at competitions.

“The Devils club was like a family to us and we won world titles together in Cyprus. But it was the Olympics that appealed and that’s why I went on to make the transition to taekwondo.

“It’s amazing think we have both ended up at the Olympics in Tokyo together. It is an amazing way to carry on the journey and hopefully show other girls what it’s possible to achieve.

Wales’ Silver Star Lauren Williams Admits: I Had A Mental Block . . . And It Cost Me Olympic Gold

“When I went on holiday with my parents in a caravan, we sat and watched the London Olympics in 2012 on TV. Jade Jones was winning in the final at the time with about ten seconds left – the points were getting higher and higher and it was getting really exciting.

“My dad turned to me and said: ‘is this something you’d want to do?’ I’d never seen the sport before – I was a kickboxer and didn’t really know what taekwondo was.

“I actually said no at the time, but taekwondo did a Fighting Chance scheme back in 2013 that encouraged athletes for different sports and backgrounds to come and try taekwondo.

“I tried it, gave it a go, my dad let me do my thing and I managed to beat the girls in front of me. My performance director saw talent and here I am today – I got selected and never looked back.”

WELSH ATHLETES IN TOKYO AND THEIR FIRST CLUBS