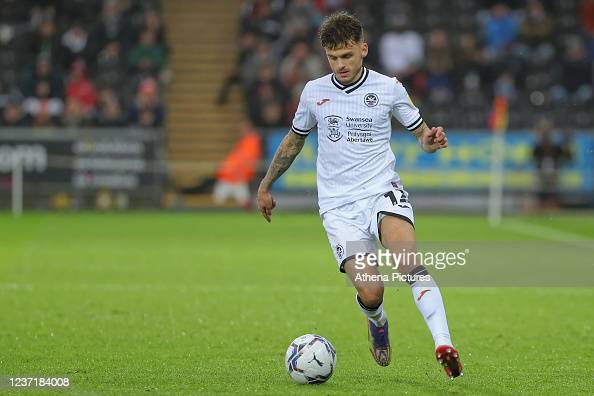 The game was merely seconds old when the ball arrived at the feet of Blackburn skipper Darragh Lenihan.

Deep in the right-back position, he shaped to launch a ball up-field, only for Jamie Paterson to rush forward and hurl himself in the way. The block came to nothing as the ball deflected safely back to keeper Thomas Kaminski, but the message had already been made abundantly clear.

In body and in mind, Paterson was back for Swansea.

The Jack Army duly sang his name and just 16 minutes in, the reintegration process was complete. A moment of quality doubled up as a brutal reminder of what Russell Martin’s men had been missing in 2021, as Paterson cut inside and delivered an inch-perfect cross onto the head of Michael Obafemi to score.

In January of course, the notion of the former Bristol City man ever appearing in home colours at the Swansea.Com Stadium again appeared a distant one. Seemingly unhappy with the terms of his contract extension, the story projected was that Paterson wanted out. His unavailability was perceived as a refusal to play. Bridges looked not so much as burnt, but cremated.

Following defeat to Luton on Tuesday now, Martin was fiercely defensive of the midfielder. He hinted then that Paterson would be in the frame for Blackburn – although even he would not have envisaged him playing 90 minutes in what proved a momentous rear-guard win.

And after seeing his side defy playing the final 37 minutes with 10 men, Martin reiterated his support of a man so key to his side before the contract saga ensued.

“We spoke about it before as a group of staff, and I was confident he would be welcomed back positively because of what he has done for us so far this season,” said Martin.

“I have been honest and I don’t see what has happened as Pato’s fault. It’s not easy to ignore the outside noise at times as a professional footballer, and he was not able to do that.

“That is not just him, it’s the same for a lot of footballers with things like social media, and it really affected him.”

Paterson needed treatment for cramp during a frenzied finale, perhaps inevitable in his first game since December 11, a point his manager acknowledged.

“Hopefully this has drawn a line under it because he played, he played really well and played 90 minutes somehow, even if we did not want him to play the whole game but he had to as Olivier (Ntcham) had to come off.

“He created a goal, there were a couple of moments of madness when he was really tired but we accept that because he is one of the bravest players we have.”

Whether Paterson recovers in time to start Tuesday’s trip to Stoke remains to be seen, but Martin also left fans, and journalists, in no doubt over his perceived importance for the final stretch of the season.

“He brings a real different energy to the dressing room, he relaxes players, he is a real leader and it has been great that we have been able to maintain a brilliant relationship between me and him, him and the coaching staff and him and the players.

Just over a week ago, it seemed the 31-year-old’s future lay far away from West Wales.

In a turnaround that can only benefit Swansea, suddenly, for Paterson it appears there’s no place like home.

If the player who missed six games feared a rough reception on his return, he was pleasantly surprised by the willingness of any skeptical supporters to let grudges go.

“That was amazing, to be fair,” he said after Swansea coped with 10 men to dent Blackburn’s hopes of automatic promotion.

“They got behind me, they sang my name, it was an amazing feeling and I was just glad to give them the three points.

“The fans helped settle my nerves and I was glad to be able to repay them with an assist, and we got three points against a really good side.

“I will try and score and assist as many times as I can, and bring the leadership and experience the gaffer talks to me about.”

For his part, Martin has shown he is shrewd enough to steer a middle ground between owners and players, without breaking the trust of either.

Blackburn had plenty of chances after Ryan Manning was sent off for a second yellow card offence, but were inaccurate.

Rovers boss Tony Mowbray appears to accept his team are unlikely to hang on to second place in the Championhsip and suggested a play-off place is their goal.

“We’ve got 16 games left and we have to win half of them,” said Mowbray.

“If we can then that will undoubtedly cement a play-off place and then hopefully we can win more than that and see how the rest do. It’s about the games we win, not the games we lose.”