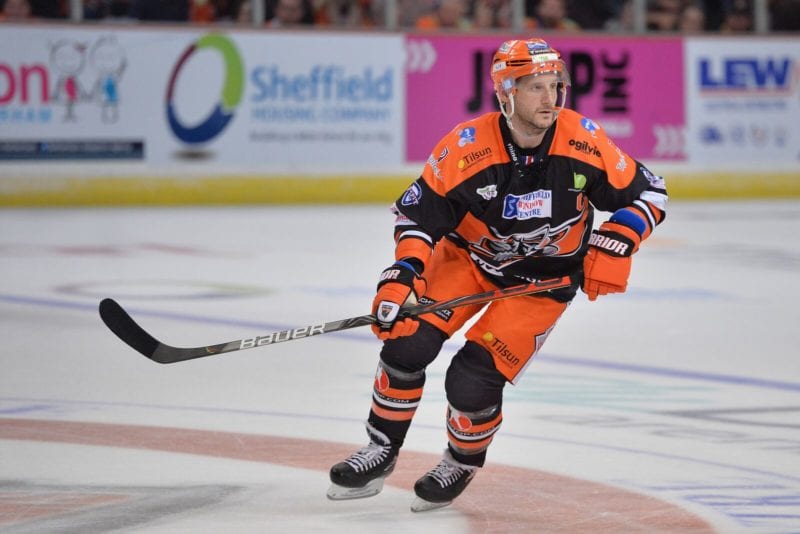 Cardiff-born Phillips, who started his playing days as a teenager with Devils, is Sheffield’s captain and he scored their first goal in a 3-2 win against Nottingham Panthers at the Motorpoint Arena.

‘Captain ‘Jonno’ is now a veteran aged 38-years-old, but he remains a fast, fit and crucial part of the Steelers team.

Yorkshireman Liam Kirk, an NHL Draft pick for Arizona Coyotes in 2018, scored two goals for Steelers, who were rocked when their American goaltender John Muse was taken off with a muscle injury.

Ben Churchfield, aged 25 and from North Shields, was sent on for his professional ice hockey debut and Sheffield coach Aaron Fox said: “A young kid in his first pro game who has nerves and jitters when we threw him in there.

“He came through well, our penalty kill was awesome and we came out on top.”

Former Devils goalie Ben Bowns was between the pipes for Panthers, while Phillips played alongside fellow Welshman Matthew Myers and teenager Alex Graham on the third line.

“It was disappointing to lose the first game of our series,” said Panthers director of hockey Gui Doucet, a former Cardiff Devils goalscorer.

“We had powerplay opportunities, particularly in the third, and Tom (Wallace, coach) used the full bench, but we just missed out.”

Doucet will be behind the Panthers bench on Sunday after it emerged someone on his flight to the UK tested positive for COVID-19.

Wallace himself tested negative before travelling and has done so again every day since his arrival in Nottingham.

The request for 48 hours isolation came through late on Saturday and was immediately implemented.

Doucet will take the Panthers’ bench on Sunday night against Coventry and will be in constant touch with Tim Wallace from his hotel room.

Subject to not developing any Coronavirus symptoms himself, Wallace will be back behind the bench for the game against Manchester on Tuesday.

Storm snatched a 3-2 overtime win against Coventry Blaze thanks to goals from Ciaran Long, Scott Simmons and Ben Lake, who struck the decisive third goal.

“It looked pretty comfortable at 2-0 ahead,” said ‘Dinner’. “Blaze fought back to force e overtime, while our guys showed good character to come up with the winner.

“We rolled four lines and had plenty of energy.”

Finnerty was delighted with 20-year-old defenceman Joe Hazeldine, saying: “He had a breast game and produced a hugely mature performance.”

Blaze paid a significant price in broken sticks – four had to be ditched after snapping – while both teams pinged the pipes.

Storm hit the pipework four times. Davies went close when his effort hit a post, while a fierce Batch effort flew off the bar.

Blaze, too, were gunning for goals and they hit the Storm pipes twice.

Devils players Sam Duggan and Toms Rutkis iced for Coventry and played their parts during an entertaining and exciting clash top start the series.

Both goalies, Sean Bonar for Storm and Coventry’s Shane Owen, were in outstanding form.

Bonar made 25 saves (92.6%) including a magnificent pad save five seconds from the end of regulation timer and Finnerty was ecstatic, saying ‘Bones was a stud in our net.’

Coventry’s Mike Hammond was voted man of the match and Blaze coach Danny Stewart said: “A special player. Whenever he is on the ice Mike is going to create something.”

Cardiff are not competing in this one-off competition, although they will be back for the 2021-22 Elite League season later this year, with four teams chasing series success.

Nottingham Panthers and Sheffield Steelers are the other teams taking part with all fixtures played at the Motorpoint Arena, Nottingham.