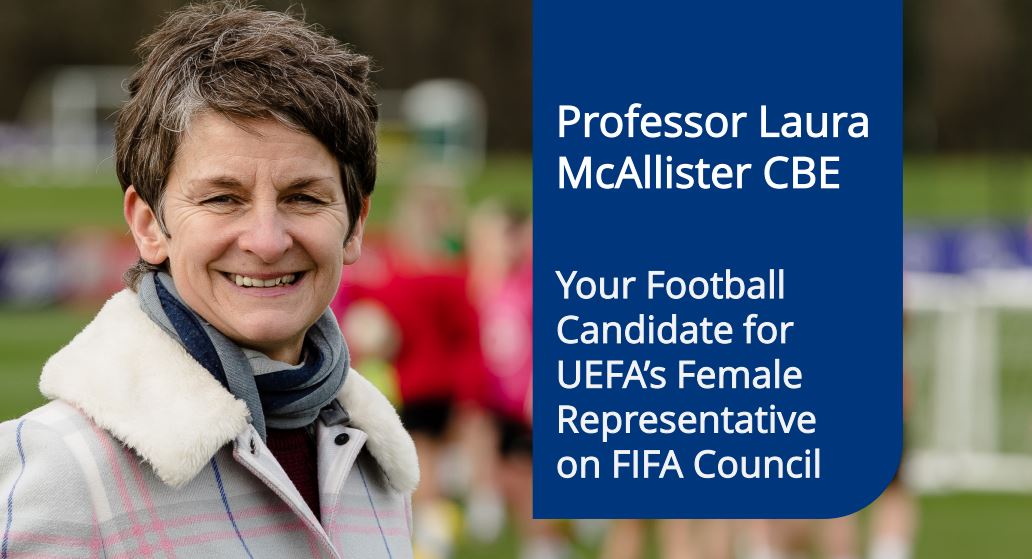 Laura McAllister will launch her FIFA manifesto this week – basing her campaign on four key strategies as she seeks to become one of the most powerful women in global football.

The former Wales international, who captained her country, is pledging to protect smaller nations, maintain competitive balance, further develop the women’s game, and work to end online abuse if she is elected onto the FIFA council this month.

McAllister – who is bidding to unseat incumbent Evelina Christillin of Italy – has been working hard in recent weeks in rounds of virtual campaigning across Europe.

This week, the former chair of Sport Wales will publish her manifesto as she looks to gain enough support across European football to garner votes in a UEFA ballot for their designated female position on FIFA council.

The document has the stamp of a progressive and modernising candidate, but one with enough political savvy not to alienate the more conservative elements within the European game.

It also positions McAllister as the “football candidate” – someone who played the game at the highest level open to her – in contrast to Christillin whose background is in skiing and tourism but who also has connections with the Agnelli family at Juventus.

The manifesto outlines four main key issues, together with a pledge to work in the interests of all member associations.

On guarding the interests of smaller nations, McAllister – professor of public policy and governance at Cardiff University – says: “I will always defend the role of our Member Associations and the unique part they play in European football – at grassroots, in development and in competition and performance – while also appreciating the key role our leading clubs play within the football pyramid.

“Crucial issues such as the release of players for national team duty and an agreed international match calendar cannot be dealt with in isolation – this is a delicate balance, but one that must be achieved for the greater good of our game.”

Her commitment to maintaining a competitive balance should find favour among the smaller nations at a time when Europe’s bigger clubs are bidding to re-structure European club football to give even more built-in protection – and finance – to themselves.

Likewise, the emphasis on further developing the women’s game will appeal to many nations eager to keep pace with those countries where the female game is striding ahead in terms of both participation and commercial relevance.

Alongside a picture of Wales captain Sophie Ingle, McAllister vows to “double down” on efforts to increase participation but also vows: “I also believe there is merit in considering selling the broadcast and commercial rights of the FIFA Women’s World Cup separately to the men’s, in order to properly amplify and maximise the value of those rights.

“As commercial revenues build for the women’s game, these need to be directly reinvested back into women’s league structures globally whilst also ensuring that opportunities are there for all girls and women to play.”

McAllister also pledges to act on one of the most publicised issues facing football at present, but which the game’s authorities have so far seemed utterly powerless to deal with – online abuse.

She commits to harnessing technology to “unmask the real life identity of abusers” as a way to deter anonymous offenders.

McAllister’s bid will be put to the test when the election takes place on April 20 and UEFA’s 55 member nations cast their vote.

Her footballing credentials and wide experience in the governance of sport would appear to make her more than a match for Chistillin, but the complexity of UEFA and FIFA politics can make the EU look like a rural community council.

It’s also uncertain how much, if at all, the recent departure of former FAW chief executive Jonathan Ford may affect her campaign.

But the slick eight-page document may well prove attractive to many nations who feel it is time for their female council representative to be more proactive on a broad range of pressing issues.

If she wins, then McAllister would become the first Welsh representative on FIFA council and the first woman from any of the home nations to get a seat on football’s top table.