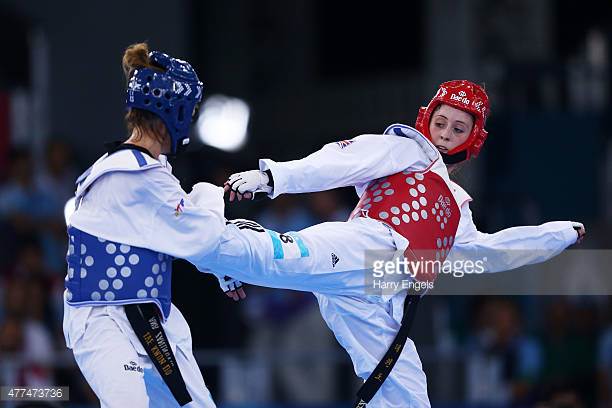 Jade Jones will be on a revenge mission as she looks to be crowned World Taekwondo champion in Manchester tonight.

Wales’ double Olympic champ will face South Korea’s Ah-Reum Lee in the -57kg final looking to claim the one major title missing from her collection.

The duo met in Muju two years ago with Lee winning the semi-final 14-8 before going onto take the title.

But this time it will be Flint fighter Jones who will have the home crowd roaring her on just like they did in Friday’s semi-final against Canada’s Skylar Park.

The 26-year-old trailed midway through the second round and was only 14-12 ahead going into the closing moments. But in flurry of points the home favourite completed an 18-12 win.

“Normally, I fight better in the semi-finals and the finals but I fought pretty well in the earlier rounds,” said Jones, who has a bronze and silver from these championships, after defeating her 19-year-old rival.

“I came off my plan a little and the match got to me. But I managed to finish it off which is hard to do when you lose it mentally.

“I just needed to focus on my plan and not think about what she was doing. I let it go cagey instead of going after her which is my normal style.”

Jones will be looking to become the third Brit to win gold at these home championships after great friend Bianca Walkden and Bradly Sinden’s victories on Friday but shrugged off talk of extra pressure generated by home expectation.

“There is always pressure the main thing I have got through on home soil.

“The crowd is all there for me willing me on. If I lose, they lose as well so that means a lot to me going in. I just want to do it for me and for them.

Jones, appearing in her fourth world championship, received a first-round bye and wasted little time when taking the mat for the first time.

Up against Cambodia’s Casandre Nicole Tubbs, the 2011 silver medallist stormed through 23-3 winning on a points gap at the end of round two.

There were no dramas either in the last 16 as the Flint fighter racked up a 17-2 win over Chia-Ling Lo of Chinese Taipei.

Her opponents were now struggling to keep up with the Jones and she guaranteed herself a third world medal by defeating Iran’s.

Fellow Welsh fighter Lauren Williams also begins her bid today to make it a golden double as she lines-up in the -67kg category.

The Blackwood fisher has won the world junior title twice but will be aiming for her first senior global crown to underline her status as one of the major contenders for Tokyo 2020.