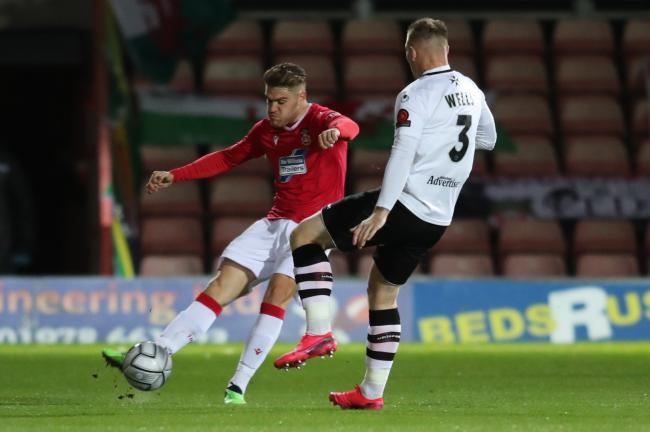 Jordan Ponticelli is aiming for a career breakthrough season with Wrexham during 2020-21 and hopes close pal Kwame Thomas is by his side along the way.

The two strikers were together at Coventry City and Ponticelli says: “Kwame and I had a good understanding at Coventry and we can build on that for Wrexham.

“He uses his body well and I try to get in and around him. That saves me having to go toe-to-toe with massive centre-backs.”

Ponticelli, who celebrated his 22nd birthday last month, showed he can be a natural goalscorer as he progressed through the Sky Blues academy, but he has yet to turn potential into reality.

He has twice found the opposition net this season, but both were ruled out by referees, one of those during Wrexham’s 1-0 home defeat against Maidenhead United.

Ponticelli fired high into the Maidenhead net with 10 minutes left, but a linesman’s flag was raised and the Dragons forward said: “I am finding the right places and on another day I could have scored three. I truly believe that.

“We created chances and Adi Yussuf did well when I did find the net. I gambled on Adi getting a knockdown in the box and it paid off.

“Whether it was offside or not I don’t know. It was a tight decision, but my effort was ruled out.”

Both Ponticelli and Tanzanian international Yussuf are big, physical, powerful strikers capable of creating space and chances for Ponticelli, who played the full 90 minutes against Maidenhead.

Thomas was his strike partner for more than an hour before Yussuf took over.

Wrexham manager Dean Keates must now decide whether Thomas or Yussuf, who is on a season-long loan from Blackpool, will partner Ponticelli in this Saturday’s National League match at second-from-bottom Wealdstone.

“They are both great lads,” says Ponticelli. “I’m not the tallest around and both Kwame and Adi get their bodies in and challenge big defenders.

“There is no doubt in my mind we should have a 100 per cent record after four matches. We should have won at Solihull, earned a great win at Yeovil and we were the better team against Maidenhead.

“There were chances and could easily have won.

“Now we play Wealdstone away and now is the time to get that losing mentality out of the way.”

Ponticelli scored twice in four matches for Wrexham last season and has returned on a mission – to score goals and help the club earn promotion to the Football League.

The tie will be played on the weekend of October 24th.