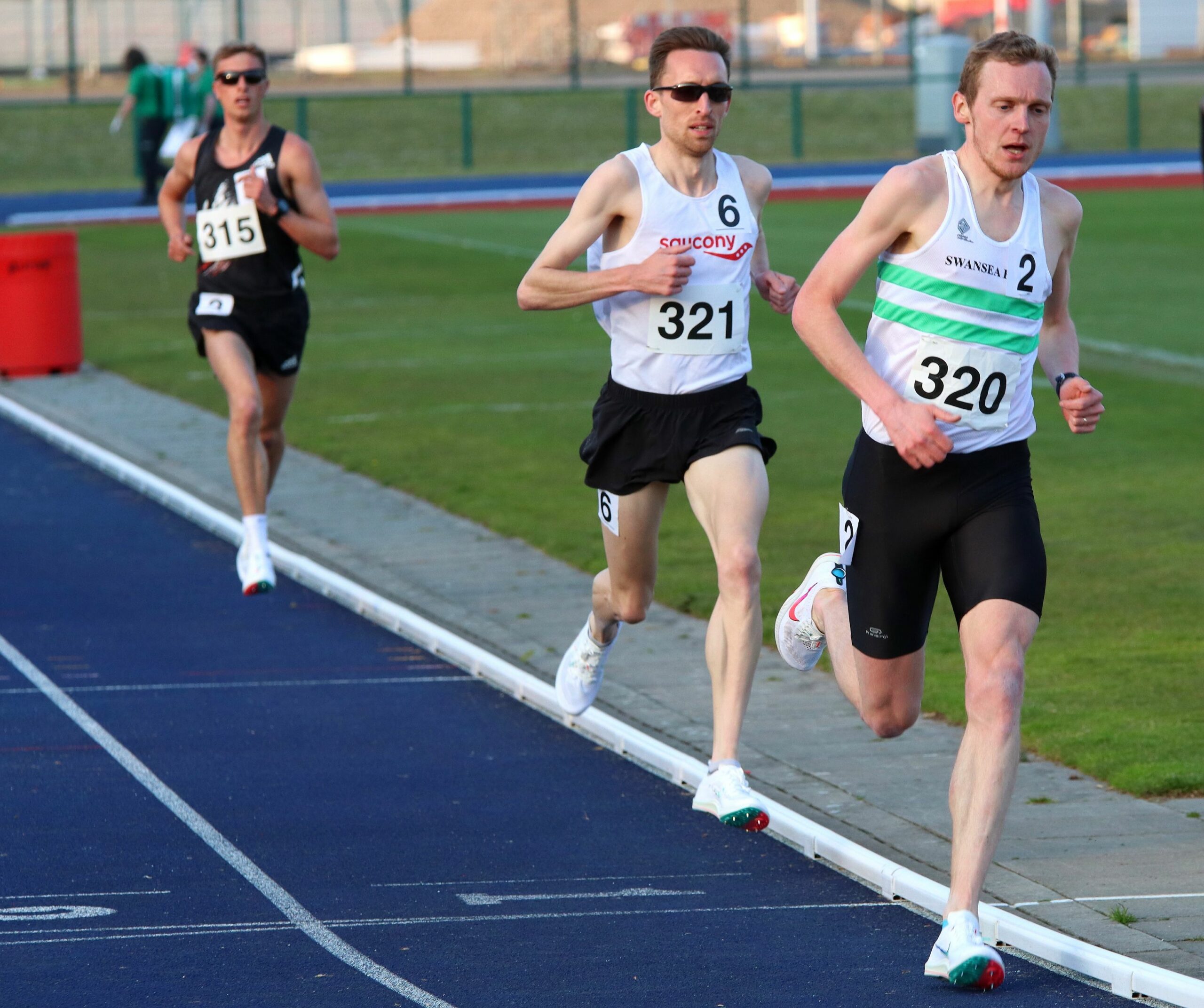 Kris Jones on his way to victory in the 5,000m on Wednesday night. Pic: Owen Morgan.

The Dundee-based Swansea Harrier was in winning form as he returned to Wales for the event organised as part of the sport’s journey back to competition.

Jones won the 5,000m in an impressive 13.49.33 considering the cool, blustery conditions and small field at the elite-only event, restricted to limited numbers due to Covid-19.

Jones, who is targeting a spot on the Welsh team for next year’s Commonwealth Games, was in Cardiff for a rare opportunity to race.

“After a year of doing time trials around industrial estates it’s pretty nice to get on to a track, be back in Wales and hearing Welsh accents,” said Jones

Echoing the sentiments of the other athletes taking part, he added: “When you train all year round you miss racing and it’s just nice to be back doing that.”

The hugely versatile GB international said: “The environment in Scottish Athletics is great, they are really supportive even though I’m not Scottish.

“There is a really good racing scene up there, but it’s just nice being back home, just to have that support that Welsh Athletics gives.”

Jones was pleased with the time – just outside his 5,000m PB – as he builds up his bid to gain the Commonwealth Games 10,000m qualifying mark.

“My PB is 13:45 and it’s not an easy night so I’ll take that. I think in a stacked race, I can take seconds off that. I was here to put in a really good effort and work hard.

“I tried to push on with 2k to go but the guys were so difficult to gap, they kept me on my toes the whole way.”

Jones added: “The target this year is to run the Commonwealth Games 10k standard.

“Looking at the standards, 10k seems more in my wheelhouse. 5k is quick and I’m a strength runner so just having a longer distance, less of a hot pace, is good.”

Wednesday night’s race was certainly a good test for Jones, despite the small field at the event which was held under strict restrictions, including all the athletes being Covid tested.

Tom Marshall, the Cardiff middle distance specialist, who himself represented Wales at the Gold Coast Commonwealth Games at 1500m in 2018, produced a brilliant run to earn himself a huge 5,000m PB, having not competed over the distance since 2012.

The event strengthened Cardiff’s growing reputation as a hotbed for endurance running as it featured some of the UK’s hottest young talent, including rising GB stars Jake Smith and Piers Copeland, who are both based in the city.

The early laps of the 5,000m was paced by Smith, who burst onto the international scene last year when a top 20 finish at the World Half Marathon Championships saw him go third in the all-time UK list over the distance.

Earlier in the evening, Smith displayed his range by winning the 1500m in 3:50.89 as he took an impressive five-and-a-half seconds off his  personal best set in 2018.

The 1500m was paced by Copeland, who finished an impressive fifth over the distance at last month’s European Indoor Championships in Poland behind Norwegian superstar Jakob Ingerbrigsten.

The Welsh indoor 1500m record holder also paced the first race of the evening – the 1000m, which was won by another young Welsh International James Heneghan, of Cardiff Athletics in 2:21.12 as he managed to hold off Cardiff-based GB Under-20 international Nathan Gillis in a thrilling finish.

@WelshAthletics Elite Endurance results https://t.co/esTUcSoAkp well done to all on the start of a return to normality hopefully

Wednesday night’s three-race meeting was the latest of a series of behind-closed-doors discipline specific events organised by Welsh Athletics allowing elite athletes to return to competition.

This Sunday sees an elite-only throws and jumps event to be held in Aberdare.