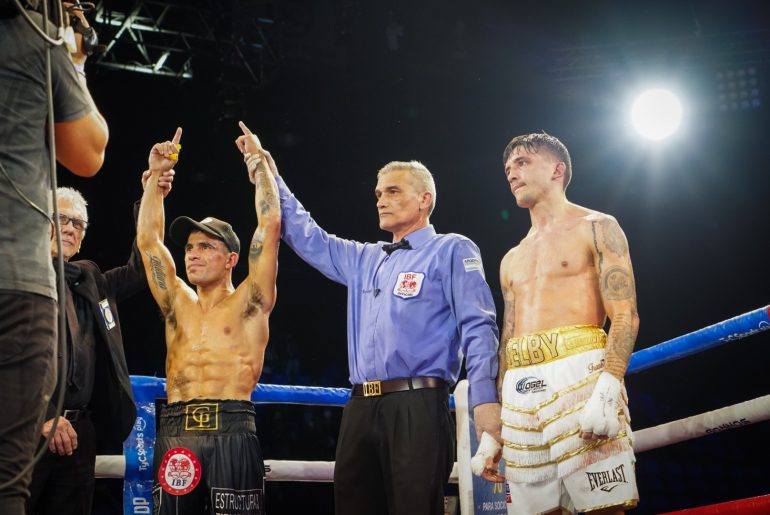 Lee Selby is contemplating retirement after his latest loss, to Argentine Gustavo Lemos in Buenos Aires on Saturday night.

Wales’ former world featherweight champion Selby was bidding for a shot at another world title at lightweight but suffered the first stoppage of his long career.

The 35-year-old has now been beaten in three of his last five fights and hinted he was considering calling it a day when he tweeted afterwards: “A tough loss to take but sadly time waits for no man.

“Getting hard to go toe to toe with these young guns 10 years my junior.

Overnight in Buenos Aires, Barry’s Lee Selby (28-4, 9KO) was stopped for the first time in his 14 year career.

The 35 year old was down in the fourth round vs Gustavo Lemos (28-0, 18KO) and halted in the fifth as the Argentine poured on pressure.

“Thanks for all the support back home, I’m all OK.

“Congratulations to Gustavo Lemos on the victory.”

The bout was a final eliminator for the IBF lightweight title but Selby was stopped in five rounds in a one-sided defeat.

Lemos subjected Selby to a barrage of heavy blows, and while the Welshman gamely attempted to do damage himself, it was the victor who was on top on the scorecards before the referee intervened.

If that is it for Lee Selby, he doesn’t go out wondering.

From the break out Stephen Smith upset to the perfect performance against Evgeny Gradovich, he’s given plenty of fond memories.

Very few make it from the Welsh small hall scene to the top. Selby was an exception.

Selby was able to inflict a cut above his opponent’s left eye, but was left woozy on his feet more than once.

In the fourth round, with Lemos already on top in the third, Selby took a knee too close out the round, with the writing on the wall.

In the following round Selby increasingly struggled to mount an effective defence and when he struggled to resist a series of heavy blows, he was knocked down for the second time in the fight and referee Mario Ganzalez called time.

The unbeaten 26-year-old Lemos is now the IBF mandatory challenger to George Kambosos Jr., though it seems unlikely that he will have an imminent shot at the title.

A tough loss to take but sadly time waits for no man. Getting hard to go toe to toe with these young guns 10 years my junior.

Thanks for all the support back home, I’m all OK.

Congratulations to Gustavo Lemos on the victory. pic.twitter.com/gz0UGn8xT3

While Selby’s light starts to dim, brothers, Garan and Ioan Croft, from Crymych, have won silver medals at the EUBC U22 European Boxing Championships in Croatia.

Welterweight, Ioan, and light middleweight, Garan, were part of an eight strong GB Boxing contingent at the tournament, which returned with five medals.

Ioan won four bouts on his way to the final including a unanimous semi-final victory over Italy’s Giacomo Michaeli.  He was denied gold by Denmark’s Nikolai Terteryan.

Garan was equally impressive delivering a series of excellent performances on route to the final including an impressive 4:1 victory over the host nation’s Noa Jezek in the semi-final.

He faced Ukraine’s reigning light-middleweight champion, Yurii Zakhariev in the final and, despite a valiant effort, did not have quite enough to upset the odds.

It wasn’t to be on finals day but everyone at @WelshBoxing is extremely proud of the twins.

Both won 4 times on their way to the final and bring back 2 more Major Championship medals to Wales.

Garan said: “It’s been a great tournament and while I am pleased with silver, I am gutted not to have won gold.

“I always knew it was going to be a tough fight against a reigning world champion who has beaten me at youth level before, but I was confident I could beat him.  I gave it my all and that’s all I can ask of myself.

“The tournament has been a success. I’ve beaten four good boxers and the one loss came against the world champion.

“I’ve still got plenty to improve on when I get back in the gym but I’m happy with how I’ve performed. It’s given me a lot of confidence though and I’ve shown I’m up there with the best in the world.”

The other medallists in the GB Boxing contingent included Sam Hickey of Scotland who took bronze in the middleweight category and two female boxers from England, Olivia Holmes and Sameenah Toussaint, who won bronze medals at bantamweight and featherweight respectively.