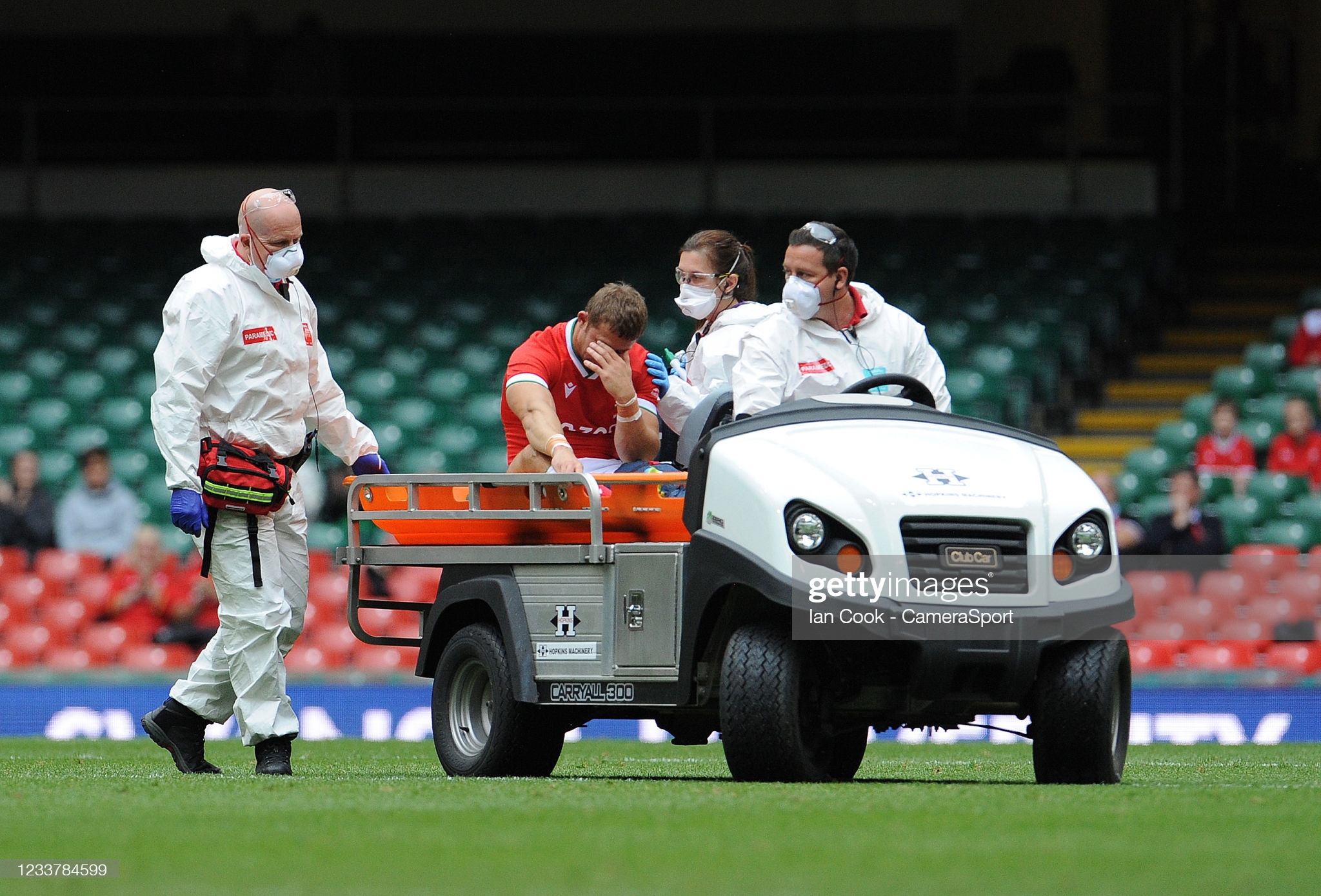 Leigh Halfpenny is waiting to hear how many more months he will have to spend on in the sidelines following the knee injury he suffered against Canada.

The Wales full-back – whose career has been consistently interrupted by various injury setbacks over the years – is waiting for scan results after his latest blow.

The Wales full-back made his 100th Test appearance in a 68-12 hammering of Canada, but what should have been a milestone match for the 32-year-old lasted just 30 seconds.

Halfpenny suffered suspected anterior cruciate knee ligament damage after he slipped stepping off his left foot while attempting to counter-attack.

Wales head coach Wayne Pivac said: “It was a shock to everyone. Leigh has stepped off one leg and tweaked the knee. We won’t know how bad it is until he gets it scanned.

“He’ll do that early next week. He was frustrated that was how his 100th Test finished and he knew straight away he’d done something.

“No matter what it is, Leigh is a determined young man. He wants to play 100 games for his country and while he has that at the forefront of his mind, I have no doubt he’ll bounce back.”

Halfpenny seems certain to miss the remaining Wales games this summer – back-to-back Tests against Argentina at the Principality Stadium on July 10 and 17.

The question will then be how much of next season will he be absent for with the Scarlets due to start their European campaign in October and Wales having autumn Tests against New Zealand, South Africa, Fiji and Australia.

Pivac was happy with the performance of a Wales side shorn of 12 front line players due to injury and the British & Irish Lions tour as they scored 10 tries against Canada. There were five new caps with Dragons second row Ben Carter putting in a man-of-the-match performance.

Wales were left shocked by Halfpenny’s early departure and Canada wing Kaiona Lloyd scored the opening try, but Pivac’s side were convincing winners in the end.

Pivac insisted Wales will have to be much better against Argentina next week. The Pumas are one of the form sides in world rugby at the moment and recently recorded an historic first ever victory over the All Blacks in the Rugby Championship.

Tom Rogers has some serious pace! 🔥

“We didn’t want to go in cold against a side that has drawn twice against Australia and beaten the All Blacks,” said Pivac.

“You have to respect any side that can do that. They’re a serious tier one nation now and for this young team to go up against a side like that is exactly what we need.

“It will show them how much hard work they need to put in if they want to play at this level on a regular basis. There are lots of learnings and there will be a lot more next week.

“I’m thrilled for Ben. It’s the first time he’s played a professional game in front of his family.

“We gave him the extra workload in terms of calling the line-outs. We wanted to put him under pressure and he did very well. It bodes well for the future.”

Carter, 20, said: “It was amazing and really tough, but the crowd really helped and it was just brilliant for me. I really enjoyed it. I felt quite a lot of pressure. I didn’t expect to be here, so everything is a bonus. It’s a great group of players and a great place to be.

“We have lots to work on, but I think it’s a great start.”

Wales captain Jonathan Davies knows an 80-minute performance is a must against Argentina.

“I thought in the first half we started well and stuck to our processes to get our rewards, but in the second half our standards slipped,” said Davies. “There is lots to work on going forward to Argentina. “Our discipline and speed to the breakdown needs to improve.”

Canada grabbed a late consolation through Cooper Coats, but they were well beaten. Head coach Kingsley Jones insists they will be better when they face England at Twickenham this weekend.

“I thought the way we started was excellent, but on 20 minutes their legs fell off,” said Jones.

“Jonathan Davies said the pace of the first 20 minutes was incredible. I think Wales played that way tactically and kept the ball in hand. They were not disrespectful to us, but they fancied running us off the park. I think we hit the wall after about 20 minutes.

“It won’t get easier against England, but we’ll have had more preparation.”