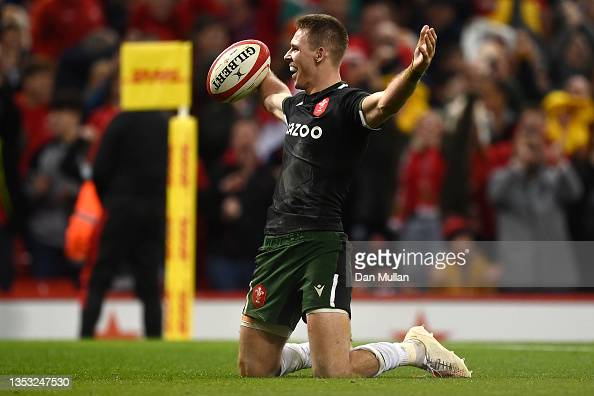 Liam Williams says he is excited by what is to come in the next chapter of his career after agreeing a switch to Cardiff for the 2022/23 United Rugby Championship season.

The Wales and British & Irish Lions international full-back, who can also operate on the wing, has been signed from Welsh rivals Scarlets as a replacement for the retiring Hallam Amos.

Williams has vowed to keep giving his all for the Llanelli-based side for the remainder of the current URC campaign, yet at the same time is looking forward to the switch to the Arms Park which he believes is just what he needs at this stage of his career.

will stay with me forever ❤️ I will be giving my all for the remainder of the season and hope to finish on a high. I’m excited about joining @Cardiff_Rugby and will look forward to meeting up with the squad next summer. #diolch

“I’m really excited to link up with Cardiff in the summer but remain very grateful to the Scarlets, who have given me so many opportunities in the game, and I’m fully committed to them for the rest of the season,” Williams said.

“I have lots of fond memories there but, at this stage of my career, I feel I need a change of scenery and environment to ensure I can stay at the top of my game. Cardiff have really impressed me recently and it feels like they are building something special.

“I have a lot of good friends there from the Wales squad and they cannot talk highly enough of the environment, and Dai Young has convinced me that Cardiff is the best place for me to further my career.

“They have an enormous amount of talent in the squad, complemented by some really exciting young players, and the competition for places will be fierce, but I am looking forward to playing my part and I am excited to see what we can achieve.”

Williams is in his second spell with Scarlets, having played for them from 2011 to 2017 before a stint with English club Saracens which included being part of their Gallagher Premiership and Heineken Champions Cup successes in 2019.

On the international stage, the 30-year-old has scored 16 tries in over 70 Test appearances for the Welsh national team and toured with the Lions in 2017 and 2021.

Williams is Cardiff’s third new recruit for next season, joining Thomas Young – who returns to the club where he began his career – and Taulupe Faletau in signing from Premiership sides Wasps and Bath respectively.

Director of rugby Dai Young is in no doubt Williams will be a valuable addition to his squad, particular with fellow Wales international Amos calling time on his career at the end of the season.

“We knew we had an opening at full-back and Liam’s talent and consistency is abundant for all to see,” Young said.

“He has been one of the best full-backs in the world for a number of years and brings real quality on both sides of the ball with his attacking ability, kicking game, positioning and bravery.

“He adds further strength and experience to our squad and will not only strengthen us on the pitch but will be a key role model and leader for some of the young talent coming through in the back three.

“It is important that we have strength and depth across the board, and we will continue to add quality to our squad when available.

“If you look at his past history, he’s averaged double figures in appearances every season. that’s what we’re looking for from our senior internationals.

“Any players in the 38 have got game limits, and Wales play anywhere between 12 and 16 internationals.

“So if they’re fully fit throughout the season, you’ll probably get 10 or 12 games out of them, if you’re lucky.

“What we think he can do is demonstrate to the young players in our squad what it takes to be a player of that quality, what it takes to have the ability to keep going out and putting the performances in, which we know he’s capable of game after game.

“We feel he’ll be a really good role model for youngsters that’s coming through.

“He’s also very strong under the high ball, we all know that, and he’s got the ability to beat the first defender. He will add to our attacking game and adds to our defensive game as well.

“We all know he’s a top quality British and Irish Lions player and you don’t always get the luck to get those players on board.”

Williams came through the system at Waunarlwydd RFC before making a breakthrough at Llanelli and the Scarlets, where he has made 115 appearances during two stints, most recently in the New Year’s Day victory over the Ospreys.

I’m very grateful to @scarlets_rugby who have given me so many opportunities in the game. I wouldn’t be the player or person I am without the incredible support from the management, players,back-room staff and passionate supporters. I will take with me many fond memories that 1/2 pic.twitter.com/sLLUhtzEB6

The 30-year-old also starred during a two-year spell at Saracens, in which he scored 21 tries in 31 appearances and was integral in the English club’s 2018-19 Premiership and European titles.

He has been equally important on the international stage, scoring 16 tries in 72 Tests for Wales, where he has featured in two Rugby World Cups and won a Six Nations Grand Slam, while he has twice toured with the Lions, earning five Test caps.

But even though Williams is the third Welsh international to move to Cardiff, his capture is unlikely to signal the end of their recruitment.

“Behind, we’re sorted now and we’re comfortable with what we’ve got there. We’re also comfortable in the back row but what we’d like to do is strengthen the front five,” added Young.

“That’s an ongoing process but most teams in Europe is looking for these big, burly lock forwards. The same is true for the big, mobile, scrummaging front row.

“We’re one of many teams looking for the same type of players and we see it as an area we need to strengthen.

“As I say, it’s an ongoing process but they’re few and far between.

“If we bring in players who stop younger players from playing, then you’ll be criticised for that. But it’s a fine balance between developing the players you’ve got, making them better, but you also want to bring in quality that can enhance their development and make us more competitive.”