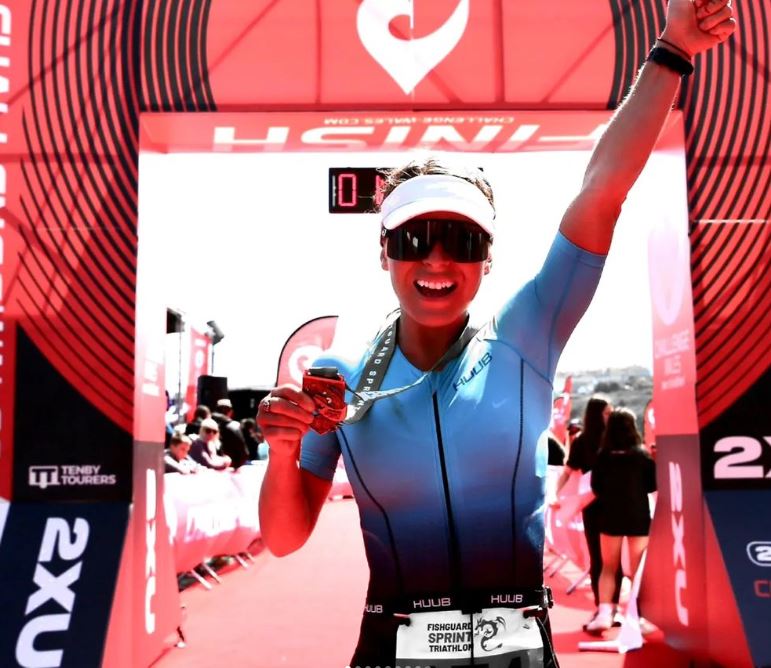 The baby-faced assassin and the woman who hit peak fitness living in a Spanish camper van will bid to continue their dominance of Welsh domestic triathlon competition this weekend.

Luke Richards and Carys Mai Hughes lead the respective men’s and women’s standings in the Welsh Triathlon Super Series, which resumes in Pembrokeshire on Saturday.

Both will be looking to stay clear of the chasers when the series hits Broadhaven with the Bluestone Pembrokeshire Coast Triathlon, highlights of which will be shown on S4C.

The leaders’ places at No.1 in the competition isn’t the only thing Richards and Hughes share, either, as both are relative newcomers to the sport.

Richards, 26, is a former Wales karate international who describes himself as a “baby-faced assassin” and only took up triathlon two years ago, while 32-year-old Hughes is even more of a recent convert to the sport and is just 12 months into competition.

Both, though, can firm up their positions as series leaders this weekend, after which there will be just two stages left of the series.

After a 1.5 kilometre swim in stunning St. Bride’s Bay, competitors will cycle 43k along Pembrokeshire roads, before a 10.6k run, the first 3k of which are along the beach and coastal path.

Richards, who competes for Rhondda Triathlon Club, admits: “I’m surprised I’m leading because I have only been involved in triathlon for two years.

“I started doing Ironman contests after watching one in Tenby and turning to my old man and saying, ‘I reckon I could beat these.’

“He told me I hadn’t got a clue how hard it is. So, I thought now I’ll have to show him.

“I did some Ironman events, did okay, and then only entered the Super Series to work on my transitions and see how I managed on short course.

“I came third in Llanelli, finished fourth in the Tata Steel event in Port Talbot, then came fourth in Fishguard. Now, I’m hoping for an even better result in Broadhaven this weekend.”

Richards, who works as a lifeguard at Bronwydd Swimming Pool in Porth, leads the men’s series from Guto Morgans of Carmarthen Triathlon Club, with Team Watt’s David Coates in third.

If Richards maintains his form then he is set to take control of the men’s competition with two final rounds to come in Bala and Llandudno.

“I haven’t done much short course triathlon before, but having had a bit of success, I’m tempted to strip it all back and do just short course stuff next year.

“Some people think this is an old man’s sport but I disagree. I think it’s a great sport for young people.

In the women’s competition, Hughes – who hails from Strumble Head near Fishguard – is even more of a newcomer but has managed to establish a lead over second place Maddison Shaddick, from Swansea Vale Triathlon club, and Cardiff Triathletes’ Eloise Crowley in third.

Heathwood Triathlon Club’s Hughes was once an asthma sufferer as a teenager, but overcame that to become a decent club runner with Les Croupiers in Cardiff.

It was a trip to Lanzarote – which turned into a six-month stay – that ignited her passion for triathlon.

That was followed by a stint travelling around Spain in a camper van, honing her fitness.

“I did my first triathlon in July of last year,” she says. “It wasn’t even a proper triathlon, it was a sportif.

“It was a last minute thing, but triathlon has now transformed my life.

“I am taking a career break to train full-time. That was also partly due to the pandemic and the changes in my job.

“I just thought I’d take a year out and do something for me, something I wanted to do. I got myself a coach, did all the textbook stuff and piled on the races.

“A big goal was to win the Welsh Super Series. I feel better at the long course stuff. I’m not much of a sprinter, but I can keep going and I’m learning more each time.

“The Welsh Super Series has been part of that development. I consider myself a Pembrokeshire girl and this weekend is a local race, which is quite a treat.”

Some of the country’s top athletes will take on the triple challenge of swimming, cycling and running in some of the most spectacular locations in Wales – the challenge continues in Fishguard this time.