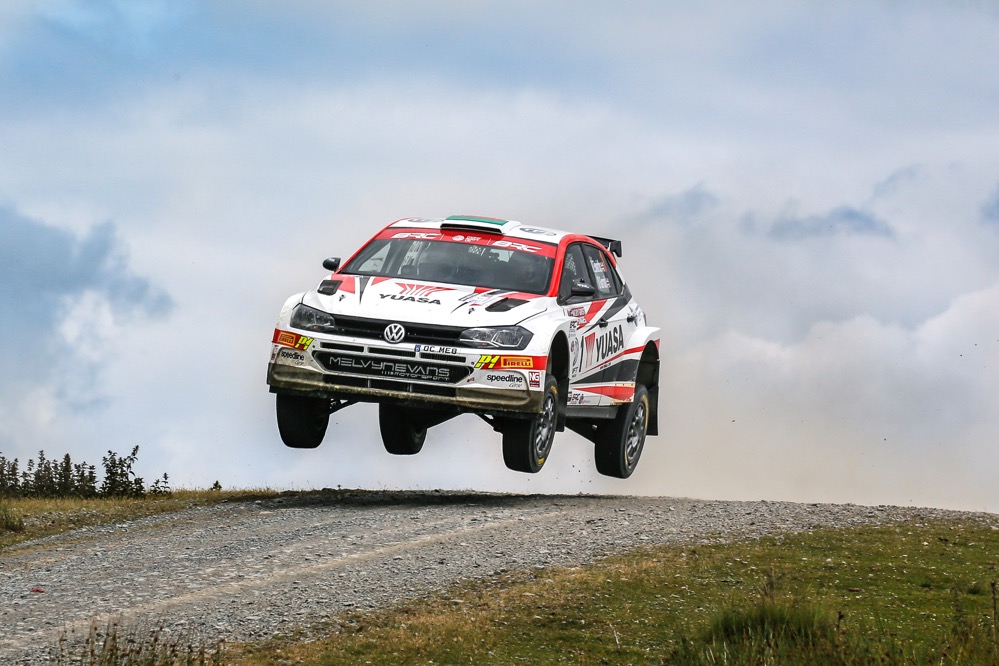 Matt Edwards and Darren Garrod took their Yuasa Rally Team Volkswagen Polo GTI R5 to a hard fought victory on the Nicky Grist Stages at the weekend, and in doing so take the lead of the British Rally Championship.

They were fourth after the opening stage, and overcame a morning misfire and brake bias issues to finish five seconds ahead of Tom Cave/Dale Furness (Ford Fiesta Rally2) after two loops through Llyn Login, Monument, Halfway and Crychan forests and all 44 stage miles had been completed.

Osian Pryce/Noel O’Sullivan (Volkswagen Polo GTI R5) finished just a further seven seconds behind in third, as the top three pulled away from the rest of the field.

Edwards had to overcome an engine misfire and a problem with the car’s brake bias en route to victory, with both problems solved at midday service by the Melvyn Evans Motorsport team.

And it was the 36-year old Colwyn Bay driver’s time through the Monument stage that was key to his success – with fastest time by three seconds in the morning and fastest by four seconds in the afternoon giving him what turned out to be the winning advantage.

All credit in fact must go to the 170 crews who took part in the Builth Wells-based event – most of which hadn’t rallied for eighteen months, and many for a lot longer than that.

And in addition to the competitors, it was Welsh rallying itself that was a big winner – as the Nicky Grist Stages was the first major forestry rally in Wales for 17 months, with Covid-19 compliant measures built into the fabric of the event.

The relaxation of Welsh government guidelines meant that the event was given the go ahead at short notice, and Quinton Motor Club rose to the challenge by organising everything in just 10 weeks.

As the event took place behind closed doors, spectators could only watch the action online.

Live streaming of the event received 75,800 views, with people logging on from as far afield as Australia, New Zealand, Saudi Arabia and Iraq.

In addition, 4,428 people logged on to a new live online tracking system, which followed every car through every stage by way of a mesmerising and slightly additive series of dots moving across a map. Green if the car was moving and blue it if was stopped!

“It’s great to win the Nicky Grist Stages and be back leading the British Rally Championship,” said Edwards.

“I have to give full credit to the Melvyn Evans Motorsport team. I had a lot of confidence with the Polo GTI on gravel from the first few runs I did with it on the pre-event test, and that has carried through to the event itself. We have a little more to do set-up wise to get a bit more out of it, but it’s a great position to be in early in the championship – leading it in a brand new car.

“Winning the Nicky Grist Stages was never going to be easy, and it wasn’t!

“We also had an engine misfire and the brake bias went for two stages, but we manage to fix both those issues and can look back and see that we were competitive from start to finish.

“I think the second stage after service, the second run through Monument, was key. We pushed hard and took a lot of life out of the tyres, especially on the downhill braking points, but we won that stage by four seconds. We had to manage the tyres for the final two stages after that. At times it was a bit of a handful, but we controlled the pace with five seconds to spare.

“When I look back at the event, I feel that this was my best performance on gravel to date, given the intensity of competition and the Polo GTI being a new car for 2021. And that gives me a lot of confidence heading into the next round of the BRC.”

“Of course, it would have been good to win on my return to the British Championship, but I’m satisfied with second, especially with the visibility issues to contend with.

“When you’re out of the seat for a while, you do start to wonder whether you’re going to be on the pace, but today’s event has answered that question. It’s been a fantastic battle all day with Matt and Osian. Just like old times. I have to congratulate Matt for job well done and Osian for keeping me on my ‘A’ game from start to finish.”

“I’m delighted with third, and a second British Rally Championship podium in as many events, especially against such a quality field here on the Nicky Grist Stages,” said third placed Pryce.

“We had a good start and led after the opening two stages, but on the second part of the opening loop we were hampered by a little bit of dust.

“It was the same for both myself and Tom [Cave], so maybe he took a few more risks in the dust. It kind of decided the rally, because the last stage had no dust whatsoever and we were faster than Matt [Edwards] and set equal time with Tom.

“But it is what it is and the three of us were very close throughout the day, so it was a very good and enjoyable battle. And it was just great to be out rallying in the Welsh forests again, after such a long time away.

“For our first gravel event in the Polo GTI, we are very pleased with the result. We’re still getting used to the car and the Michelin tyres. Tyre wear was a little higher than we’d expected in the afternoon for example, but we’re learning all the time and there is a lot more to come from me in this car, so in this early stage of the championship everything is going pretty well.

“We’ve got a lot of groundwork and learning done on the Nicky Grist Stages and that will put us in good shape for the next round of the BRC. The Grampian Forest Rally [on Saturday 14 August] is also gravel and quite fast as well, so this event has been massively beneficial for us moving forward.

“Two podiums from two events is a strong start to the championship and consistency is already there. I really felt that I was starting to get on top of the Polo GTI on the closing stages of the Nicky Grist, and that is a good confidence boost heading to Scotland for the next round.”

Callum Black and co-driver Jack Morton took victory on the opening round of the 2021 Motorsport UK Pirelli Welsh National Rally Championship, winning the Interclub Rally section of the Nicky Grist Stages and finishing an incredible seventh overall in their Ford Fiesta R5.

In his first rally outing for almost two years, and his first in an R5 car for three and a half years, Callum, the 2017 Pirelli Welsh National Rally champion, drove brilliantly to score maximum points.

Despite a handling problem in the morning, caused by a broken anti-roll bar, and a spin on SS2, the 586 Sports team driver finished 21 seconds ahead of Ian Bainbridge/Will Atkins, who were delighted with the set-up changes they’d made to their Škoda Fabia R5 during lockdown.

After a very good start, they found the afternoon loop was much more challenging, but did well to stay in touch with the R5 cars. They were also top Welsh Junior crew home – Lepley staking first claim to the top end-of-season prize of a test in a PCRS Rallysport-prepared Hyundai i20 R5, courtesy of OnThePaceNote.

It’s the same Junior prize that Tom Llewellin won in 2019, and the former Welsh Junior champion appeared this time in a Mitsubishi Mirage. Together with co-driver Ross Whittock, he made a fantastic four-wheel drive competition debut, and never put a foot wrong as he got valuable miles under his belt on his way to fourth.

2019 Pirelli Welsh National Rally champions Matthew Hirst/Declan Dear had a nightmare of an opening loop, with an engine misfire on SS1 and 2 and a broken driveshaft on SS3 and 4 in their Mitsubishi Evo IX. Despite this, they showed their class with a brilliant recovery in the afternoon, which rewarded them with 11th at the finish.

Also struggling was the 2019 championship runner-up Russ Thompson, who snapped a pair of driveshafts on his Mitsubishi Evo IX upon landing after a jump on SS2. Having missed two stages, he completed the afternoon’s loop of stages – both for testing and to get seat time with new co-driver Peredur Davies.

Andy Davies/Ian Beamond were having a good run before a TCA broke on their Subaru Impreza.

Bob Morgan’s first rally for three years was hampered a little with his super-smart and self-prepared Škoda Fabia struggling to launch off the start lines. Co-driven by Adrian Williams, the Winner Garage boss was to retire in the afternoon with brake problems.

David Crossen won the Restruct-sponsored Two-Wheel Drive category, the Irishman finishing eighth with Aileen Kelly on the notes in an Escort Mk2.

Paul Barrett/Gordon Noble were almost a minute behind in their Escort Mk2 – but were nonetheless overjoyed to win the hotly contested Historic class.

Having very kindly donated 500 packets of fabulously moreish Brace’s Welsh Cakes for all the volunteer marshals, Jonathan Brace had a good start to the event – despite picking up a puncture in SS2. Sadly for him and co-driver Paul Spooner, his immaculate Escort Mk2’s engine cut out a mile into the final stage and refused to restart.

Ben Friend/Cliff Simmons also had high hopes of a good result, but their run ended after their Escort Mk2 broke its differential on landing after a crossroads junction.

Ioan Lloyd/Sion Williams enjoyed a fantastic run in their Peugeot 208 R2, a spin on SS2 not getting in the way of a well-earned W4 class victory. Jonathan Jones/Alan Walker were second in their Fiesta R2, while Charlie Todd/Glyn Thomas completed the top three Welsh Juniors in their Fiesta R2T.

Jonathan Lee Jones/Lewis Griffiths gently rolled their Fiesta R2T in Halfway, but sadly a holed radiator meant that they could go no further.

“It’s been three and a half years since I last drove an R5 car and almost two years since I’ve done a rally, so it’s been a very enjoyable event and I’m delighted with the result,” said Black.

“It was good to just be back in a rally car – and I was surprised to be right up there and leading the very strong Welsh National Rally Championship section after stage one. Between stage one and two, I noticed that the anti-roll bar had snapped, so I had to disconnect it on the road section. The stability was compromised and the car was trying to get away from me on the faster sections after that, so stages two, three and four were a bit of a challenge.

“The team fixed the car at midday service and after giving it a good go on the first two stages in the afternoon, we decided to bring the car home safely and get through the last two stages without any heroics and take home maximum championship points. I’m very happy with the result and I’m already looking forward to the next event.”

Not all crews were celebrating at the finish of course.

Ollie Mellors launched his Proton Iris R5 into orbit a few hundred metres into the opening stage, landing the car on its nose and rolling it across the Epynt military range.

He escaped uninjured, while co-driver Max Freeman hurt a foot.

The lack of any serious injury highlighting how strong modern rally cars are, and how much crew safety equipment has developed.