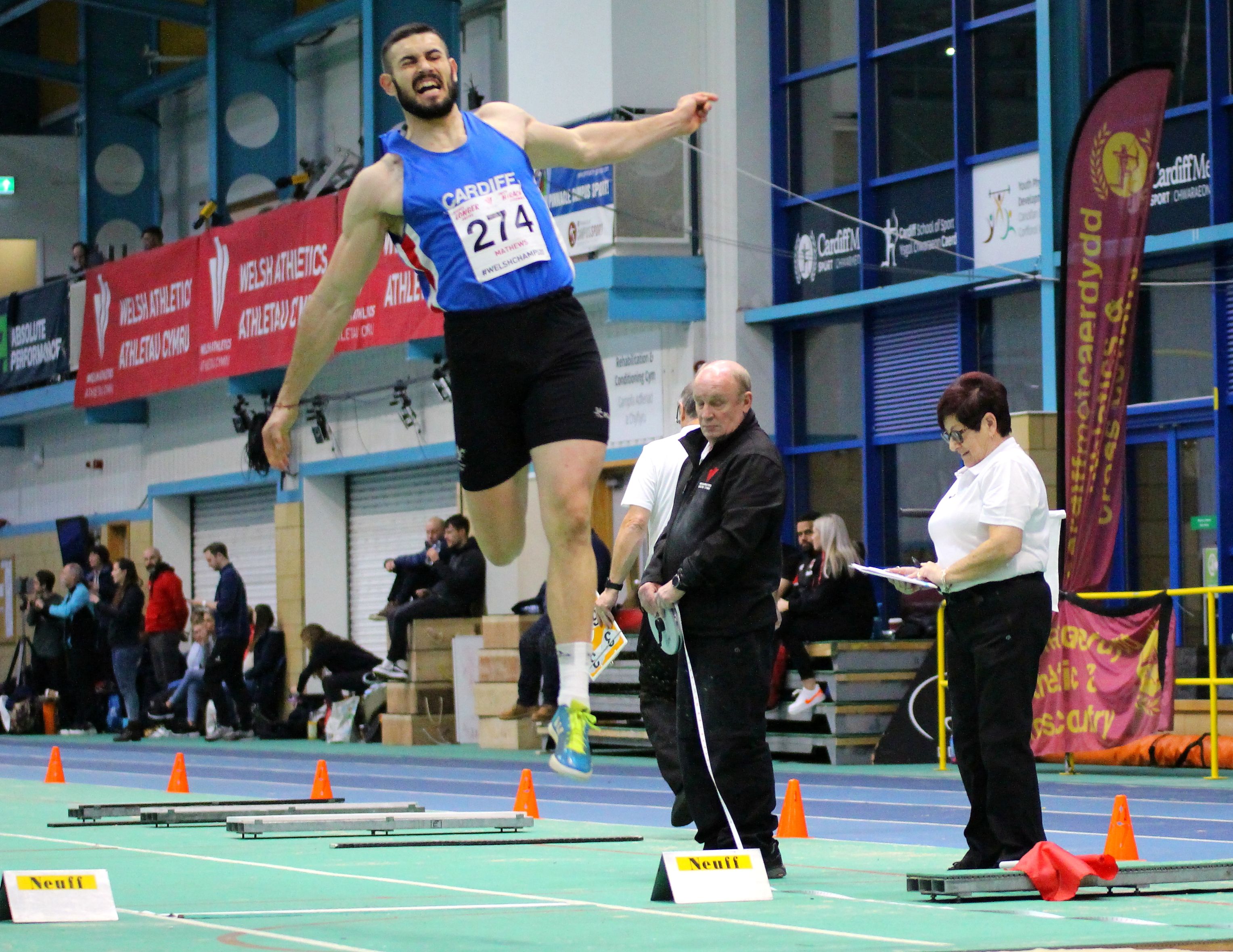 Curtis Matthews had a busy day at the Welsh Indoor Championships in 2020 claiming two golds and a bronze. Pics: Owen Morgan

The most successful individual medal winner on the day was decathlete Curtis Matthews, who claimed two Welsh titles and a bronze medal.

The two-time Commonwealth Games competitor started his day with bronze in the shot put, behind champion Patrick Swan, of Cornwall, who won with a distance of 16.20m and Newport Harrier Daniel Cork, who claimed silver.

Matthews then went on to claim the 60m hurdles title in a time of 8.46, ahead of silver medallist Justin Tarrant, who claimed a PB of 8.63.

The Cardiff athlete then added to his medal haul by leaping out to 7.07m to clinch the long jump title ahead of Maldwyn’s Ryan Edwards, who claimed silver with 6.76.

Matthews said of his day’s work:” It was ok actually! The shot put started terribly. I thought ‘oh God, another one of those days, this is just going to snowball, the hurdles are going to suck and the long jump’s going to suck.

“But I pulled the shot put back and it was alright, the hurdles, I was happy with that and the long jump, yeah, to jump over seven metres, I’m chuffed with that.

Matthews hopes his performances bode well for a successful decathlon campaign this season.”The past couple of years I’ve been terrible with completing decathlons, so this year we just want to get into a position where we can enter them and just know we can do all 10 events without breaking down too much.

“The last couple of years have been such a trough, with tendon issue and things again, so this year is more to get back to a place where I can complete decathlons and perform consistently throughout. My PB is about 7,500, if I can get three or four decathlons around there this year I will be really happy because that will set me up next year to go after some sort of standard.

“This year is a stepping stone year I guess. The next goal is the Commonwealths again because I’m behind where I really wanted to be. So I can’t say big goals this season because it’s not quite there, but you never know.”

A big crowd at NIAC were treated to a number of thrilling performances during an action packed day of athletics.

One of the most exciting finals came in women’s 1500m, where long time leader Julia Cooke, of Birchfield Harriers had to settle for bronze after she was finally overhauled by Cardiff’s Kate Seary, who claimed the title in 4:37.50, just ahead of Parc Bryn Bach’s Lauren Cooper.

There was another last gasp finish in the women’s 800m final where Wigan’s Rachel Scott timed her run perfectly to overtake frontrunner Jade Williams, of Amman Valley Harriers, on the home straight to win in 2:11.72. Williams held on for silver ahead of Cardiff’s Lizzie Harris.

The women’s 60m hurdles event saw Commonwealth Games sprinter Caryl Granville set a new PB of 8.47 in qualifying and then win the Welsh title with a time of 8.50 in the final, ahead of silver medallist Olivia Walker and Grace Morgan, of Cardiff Archers, who won bronze in a new PB of 8.74. Fellow Archer Caitlyn Mapps also claimed new PBs in qualifying and finishing fourth in the final.

The women’s pole vault final was a close affair with Swansea’s Carys Jones claiming the Welsh title on countback after she and Cardiff’s Isabel Thomas both finished with a best height of 3.81m. Megan Jenkins was third with 3.31m.

The men’s pole vault title was claimed by Wrexham’s Thomas Walley, with a height of 4.56, ahead of Swansea University’s Ieuan Hosgood, who registered 4.46 and Swansea Harrier Fynley Caulder who claimed bronze with 4.36.

The open category of the men’s high jump saw an outstanding performance by Team Bath’s Tom Gale, who produced a meeting record of 2.28m. The Welsh title was won by Cardiff’s Jonathan Bailey with 2.02m.

There was a poignant moment in the shape of a moment’s applause in memory of Welsh Athletics vice chair Ron Odunaiya, who had sadly died earlier in the week.

The event also saw a number of high quality junior events and a series of closely fought junior relays.

Full results from the championships will be available on the Welsh Athletics website.