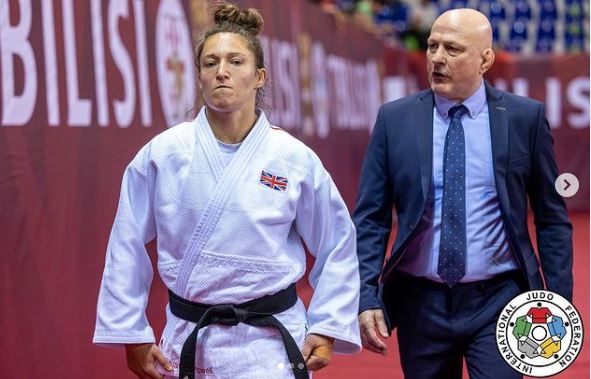 Natalie Powell has overcome challanges on and off the mat.

Natalie Powell is used to slamming opponents into the ground, but the Welsh judo star admits it was a personal battle over her own identity that left her properly floored.

The Commonwealth champion of 2014 will finally get a chance to defend her title in Birmingham this month, but the absence of her sport from the Gold Coast Games four years ago was nothing compared to the frustration going on in her personal life.

One of Team Wales’ most successful and experienced athletes, Powell came out as gay in 2017 after what she describes as “six years of pain.”

The 31-year-old knows what it is like to feel fear and apprehension and so is determined to visit the Pride House in Birmingham during the Games, to give her support to LGBT athletes – some of whom, she knows, are in danger of arrest and imprisonment in their homeland.

Powell was ranked world No.1 in 2017 – the first UK judoka to reach that pinnacle after the introduction of an official ranking list.

But the strain of competing while not being true to herself and those around her proved intolerable.

“It was a year after the Rio Olympics, in 2017, that I broke down,” says Natalie, who was based in Birmingham at the time at the British Judo Centre of Excellence.

“I was going to the Worlds (Championships) in Budapest and we had a ‘Pressure Day’ before it.

“I went to the Worlds, got a bronze medal, which was my best performance, and soon after got to number one in the world.

“I was also pushing myself and saying, ‘if I get through the judo. I’ll be fine.’

“I was living with one of the girls on the team in Walsall then and I was crying, uncontrollably. I told her and once I did that things started to improve.

“Within six months I was like another person. It was just a weight off my shoulders.

“I was comfortable in myself and couldn’t believe what I’d put myself through. But I think it’s just culture and what people see as social norms when you’re growing up.”

Natalie says she always felt confident that her family and friends would be supportive of her decision to come out.

But even with that reassurance in her mind, she still found taking the step a daunting experience.

“It was definitely the hardest thing in my life I’ve had to deal with. For six years I was not comfortable with who I am.

“Eventually, when I moved to Walsall and I was away from my friends and family, I just broke down.

“After Rio I knew that if I didn’t come to terms with this and deal with it I wasn’t going to be able to progress before Tokyo.

“But I found it very difficult to actually say to someone that I was gay. It was crazy, really, because I had such a good support system around me.

“I can’t imagine how difficult it is for people who don’t have a good support network or it’s against their beliefs to be gay.

“I knew my parents, family and friends would all be supportive, but I still couldn’t bring myself to say it. If I could go back and take away those five or six years of pain I would.

“It was such a big issue in my head, I had so many sleepless nights over it.”

Powell hails from the village of Beulah, near Builth Wells in Powys and took up judo from the age of eight.

She won silver at the European Open in 2014 and then stormed to gold at the Commonwealth Games in Glasgow that same year at the age of 23.

“Ever since I was little the Commonwealth Games was the thing I wanted to win. I think it was because in Wales everyone saw it as the pinnacle of the sport!

👊 A great fightback from @Nataliep_90!

She takes 🥉 via the repechage at the #JudoTbilisi Grand Slampic.twitter.com/auObMj9JZG

“It wasn’t until I got a bit older that I realised the Olympics was obviously a much bigger event. But I always wanted to win at the Commonwealth Games, ever since I was at Irfon Judo Club and Gary Cole came back with a bronze medal from Manchester.

“Winning in Glasgow was really special. We only get to compete for Wales at the Commonwealths, really . . . and Wales were the ones that supported me all the way through as well.”

Powell was tipped a major medal prospect for Great Britain at the 2016 Olympics, but came home disappointed with a seventh-place finish.

She admits that left her deflated, but the rollercoaster ride continued with her bronze medal at the 2017 World Championships, followed by hitting the No.1 world ranking, and then a slump at the delayed Tokyo Olympics.

“I didn’t come anywhere near what I had hoped to achieve,” she admits.

“I felt I was in a place in 2020 that I needed to be for the Olympics. But then the Games were cancelled and everything was turned upside down.

“I threw myself into training, but in hindsight I was probably a bit burned out when the Games came around.”

A year on, and Natalie feels more confident.

“I’m on the other side of that now. I’m enjoying judo again and hoping to get back to my form for the Commonwealths and the Worlds in October.

“The Commonwealths have really given me a goal to get back on track.”

However she performs, though, she will find time for a visit to the Pride House during her time in Birmingham – a venue set up to promote LGBT participation in sport and physical activity.

“The amount of Commonwealth Games countries that are not LGBT friendly is quite staggering,” adds Natalie.

“So many of them, it’s illegal to be gay. So many of them have crazy laws. This needs to change and having a house where everybody can be included, not just LGBT people, is so important.

“Getting allies on board who can come to one space and be accepting of everybody for who they are, it’s a great initiative.

“I don’t know how far it will go in terms of making it acceptable in some of these countries where governments and laws need to change. But it’s a great place to start and hopefully these countries will take notice.”