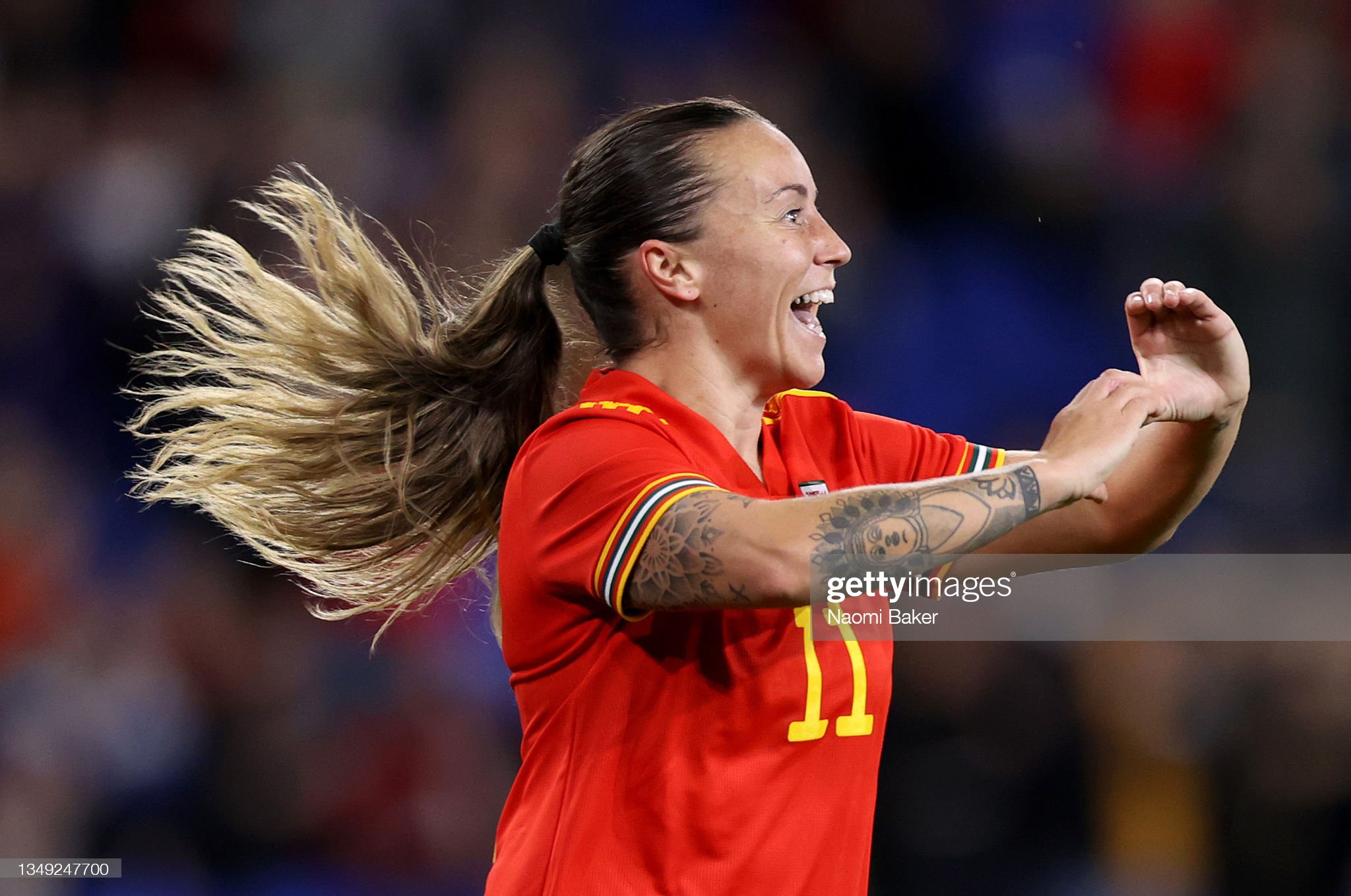 Natasha Harding is set to win her 100th cap for Wales on Tuesday afternoon to write the latest chapter in an astonishing 14-year story.

The Wales striker will reach three figures if she makes an appearance against Kazakhstan, in what is a crucial game for Wales in their World Cup qualifying campaign.

Harding made her Wales debut against Switzerland as a 19-year-old way back in 2008.

Her landmark will be significant in other ways. Following their 2-1 defeat against France on Friday, Wales are now a point behind Slovenia in the table, meaning a win against Kazakhstan is vital to get their qualifying back on track.

Slovenia drew against Greece unexpectedly earlier in the campaign, which means Wales are still in charge of their own destiny.

Reading star Harding has been a stalwart within the Welsh side for many years now and it’s her personality and dedication which set her apart.

Her flexibility and her willingness to do everything for the badge on her chest means that she will be crucial if Wales are to pick up three points tonight.

Natasha Harding Is Hoping Records Will Be Broken In Llanelli . . . As Wales Look To Secure A World Cup Play-Off Spot In New Kit

“It’s quite mad to believe, certainly if I was someone else I’d be thinking ‘how has she got involved with them lot?” Harding said.

“I’ve always put myself in a position that I will always be ready for Wales.

“To follow in the footsteps of Jess Fishlock, Loren Dykes, Sophie Ingle, Gareth Bale, Helen Ward . . .  these are amazing players who have played for this country. To put myself on that list, it’s unbelievable.”

Harding has been around for the more difficult days in women’s sport, where funding wasn’t available and men’s hand-downs were passed on to the women’s team.

Thankfully, those days are in the past, a transformation Harding has lived and played through.

“At that time, it was never a possibility, but seeing the women’s game develop so fast I think 17-year-old Tash would have never thought this would have been a possibility.

“It’s quite a surreal moment. It’s always been about the game. It’s never been something that I have sat down and counted out the caps to be honest. It was only when we got to the camp that it hit home, the possibility of receiving that massive accolade.

“I had some messages from my father yesterday which was quite nice and I’m sure there will be a few happy tears.

100 Caps Milestone in Kazakhstan For Welsh Wonder Girl Natasha Harding 14 Yrs on from making her debut & 25 goals later she can’t believe she will became of only 8th Player 2 have represented Wales 100x with 3 of those Goals coming in One game @ Wrexham in 2013 pic.twitter.com/1voZEXKBKw

“It’s everything to put your name in the history books and to be an openly gay woman. Jess has led the way in that aspect, but it is special to put myself in that category with the other girls and the men.

“We try to be the inspiration for people. I truly believe if you can see it, you can be it.

“I‘m sure tomorrow will be an amazing day and atmosphere for everyone involved. Certainly, for myself, but I just want to get three points and celebrate on the plane afterwards.”

On the potential for Harding’s 100th cap, captain Sophie Ingle is ecstatic:

“It’s just incredible that there’s so many women who have been in and around this team over the last 10 years, getting the awards that they deserve,” said Ingle.

Wales manager Gemma Grainger also heaped praise on the for the dedicated and hard-working Harding and said: “She is herself, her personality around the group is brilliant.

“She is incredibly versatile. She will do anything for the team.”

Grainger also recognises Harding has been such an iconic player for Wales but is still well worth a starting place in the line-up.

“You can see with her standards, she drives the team, but she is also the team joker as well.”