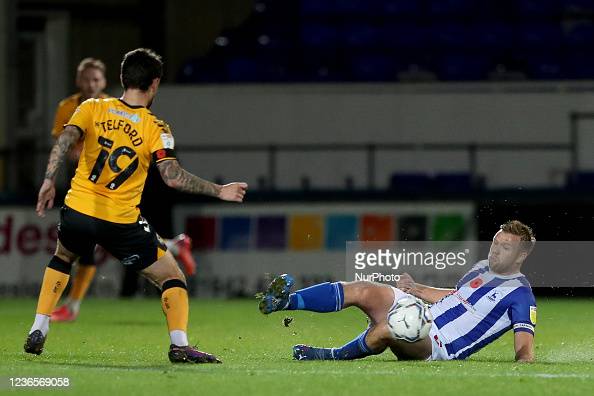 Newport assistant manager Wayne Hatswell admits the club will have to fend off bids for League Two top scorer Dom Telford this month.

Telford has 19 goals in 20 games after his double on Saturday helped his County side hammer Harrogate 4-0, with Mickey Demetriou and Courtney Baker-Richardson also on target.

“There’s always going to be people looking at him,” said Hatswell.

“That’s part of the game but the club is in a good place, Dom’s enjoying his football – you can see that – and he wants to be part of something here.

“If there was a big move for him, that’s something the club would have to deal with as and when it happens. But he’s here and he’s doing really well.”

Very enjoyable game of ⚽️! Great team performance looking forward to having you all back in next week 🧡🖤 https://t.co/ySq1YpxBDp

Harrogate boss Simon Weaver acknowledged that his side were second best.

“I don’t think we can come away with much credit in any aspect,” he said. “We were poor.”

Defender Mickey Demetriou opened the scoring with a penalty in the eighth minute after Dom Telford had been upended by Harrogate captain Josh Falkingham.

And, after Nick Townsend had denied George Thomson with a flying save at the other end, Telford took the game away from the visitors with goals either side of half-time to take his tally to 19 in 20 games so far this season.

The first was a clever flick in the 43rd minute and the second an assured finish into the bottom corner in the 49th, with Finn Azaz claiming the assist on both occasions.

Courtney Baker-Richardson completed the rout after rounding goalkeeper Mark Oxley and firing into the empty net in the 55th minute.

Newport, who were without manager James Rowberry due to a positive Covid-19 test, therefore had plenty of time to savour their first league win since beating Port Vale on December 11.