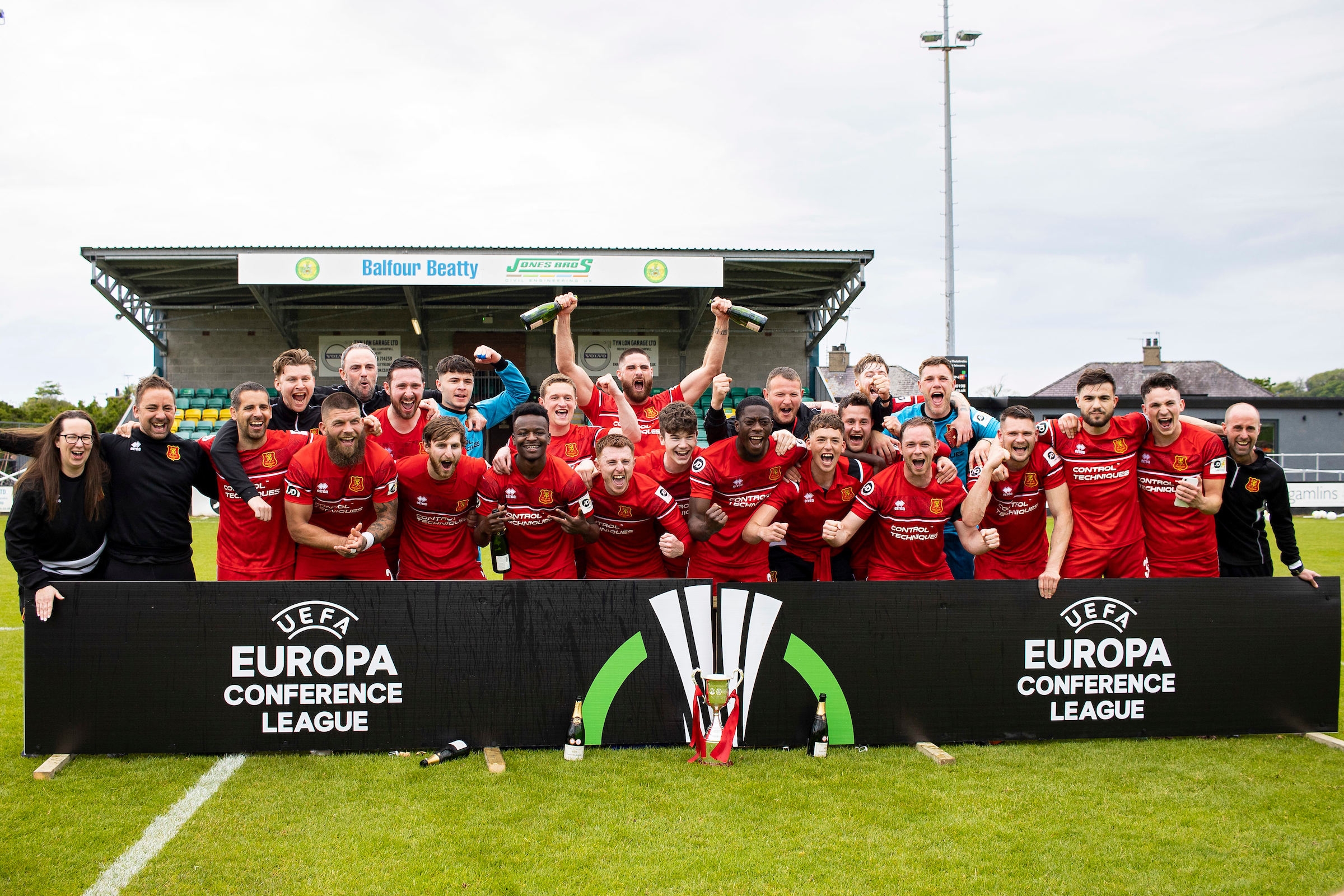 Caernarfon, WALES - 29 MAY, 2021: Caernarfon Town v Newtown in the JD Cymru Premier European Playoff Final at The Oval on the 29th May 2021. (Pic by Lewis Mitchell/FAW)

Play-off finals, by their very nature, seldom amount to more than unspectacular and cautious affairs fraught by tension and fear of failure – but the curtain closer to the Welsh 2020/21 football season, much like the season itself, will be long remembered for being anything but ‘normal’.

There was little indication of the events that would unfold and make Newtown’s victory over Caernarfon, one of the all-time great games in Welsh domestic football, when Jack Kenny pounced on a defensive lapse of concentration to give Caernarfon an 18th minute lead.

The game’s tempo dwindled away for a chunk of the first-half after play was paused following a nasty collision involving influential Caernarfon midfielder Paulo Mendes, who was irresponsibly allowed to return to action despite clearing presenting as dazed, creating some uncomfortable viewing, before finally being withdrawn.

It was not until six or seven minutes before half-time did the game truly spring into life when a rash decision from Lewis Brass saw the Caernarfon keeper collide with Lifumpa Mwandwe, resulting in an obvious penalty which Nick Rushton duly converted.

Minutes later, Mwandwe again proved problematic to Caernarfon when Brass parried a cross into the path of Newtown winger, who steadied himself and unleashed a powerful half-volley back across goal and into the bottom corner to secure Newtown a 2-1 half-time advantage.

Scenes of Caernarfon’s supporters highlighting the absurdness of the enforced behind closed doors restriction measures by resorting to hanging over walls and peering out of roofs overlooking the Oval to observe the biggest game in their club’s history, will create a lasting picture.

The ruthless reality of Welsh football’s lockout should poise some pressing questions to Welsh Government as to how it values Wales’ own national league.

To date, there has been zero intention to include domestic football amongst its relaxation of measures, raising uncertainty as to what measures exactly will remain in place for next season which is just a couple of months away.
https://twitter.com/GeraintPanorama/status/1398623644818018306

Darren Thomas – the talented Cofi idol – appeared to have read the script for the club’s big final.

The passion and commitment shown by Caernarfon’s fans looked to have been rewarded by Thomas, who mercurially turned the game on its head to put Caernarfon in the ascendancy with two fine finishes, worthy of any showpiece game.
https://twitter.com/sgorio/status/1398619987972079618
In a season that has resisted complying to any sort of script or plan neither on or off the field however, Caernarfon’s European hopes disintegrated upon the introduction of Newtown substitute forward James Davies.

A shift in momentum in the final quarter of an hour of the game felt like Caernarfon had the carpet pulled from underneath them as their defensive structure subsided in catastrophic manner, conceding three times in six heart breaking minutes for the Cofi fans.

A routine set-piece delivery swung into the six-yard box fell to Davies, who was left unchallenged as he nodded in Newtown’s third, equalising, goal.

And moments later, a costly turnover saw Newtown gain a 4-3 lead with Davies somehow seemingly oblivious to the drama engulfing the game, as he remained composed and steady to slot in a second goal.

Momentum remained firmly fixed in Newtown’s favour, as did calamitous defending, as Jamie Breese bundled in Newtown’s fifth and final goal to secure victory, showing commendable grace in not celebrating at the expense of his shell-shocked former club.

Besides the polar opposite raw emotions of triumph and despair upon the full-time whistle, for the neutral the match proved to be a fitting end to the 2020/21 season.

Newtown’s journey to Europe has been one of remarkable resilience – from being nine points adrift from seventh-place at the league split, to entering the play-offs as the lowest placed seed, to seeing over favourites Penybont in their own backyard, to overturning a 3-1 deficit in the final itself.

With Chris Hughes at the helm, Newtown surely have the league’s most underrated manager.

Hughes has not only kept Newtown competitive amongst the various emerging teams during his seven-year tenure at the club, but has now taken the mid-Wales club into Europe twice.

Newtown’s achievements under Hughes are admirable and prove what can be achieved with good management and continuity.

The completion of the Welsh football season is a feat in itself.

Perilously over-reliant on the goodwill of volunteers to maintain the day-to-day running and administration of the clubs, the league’s ever-committed workforce found themselves under the additional demands of complying with Covid protocol measures to ensure the league was able to resume and remain operational.

And whilst the lack of fans, relegation, cancellation of the Welsh Cup and lack of lower tier action took an edge off the season, these people helped make Welsh football feel like football again.

We were treated to a captivating title race between Connah’s Quay and The New Saints and their pantomime villain chairman Mike Harris, and a wildly unpredictable play-off competition, with Caernarfon and Newtown delivering an extraordinary finale.

That is not to say that further challenges loom on the horizon for the Cymru Premier and the rest of the domestic pyramid.

Details on the return of spectators, a financial lifeblood for clubs, still remain sketchy and the reality of the league losing its fourth European spot could result in next season’s league format looking particularly tepid without the play-offs to conjoin the league’s split format.

There is also the risk that the Cymru Premier’s big-three clubs will pull even further away from the rest, having essentially ringfenced European prize money for the foreseeable future, whilst the mixed performances of Welsh clubs in Europe generates annual debate and frustration.

For now however, we should just be grateful that the clubs were able to complete the season. Thank you to every single person who helped make it happen.

Featured image courtesy of the FAW