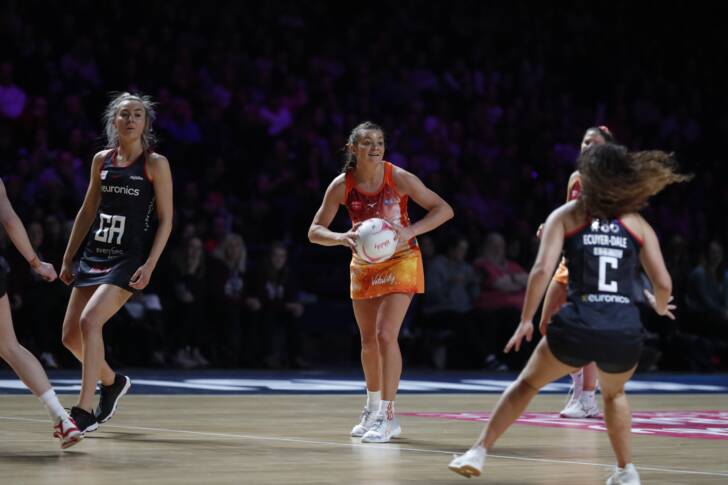 The 36-times capped defender will take on the role of vice-captain for the new campaign having joined from Celtic Dragons last season.

“It was a no brainer for me to return,” said the 28-year-old who made four appearances before the season was suspended due to COVID-19.

“I felt that management and our teammates really valued and respected what I could bring to a team, on court and off it.

“Training is always challenging yet rewarding, and not having that week-in week-out has made me really, really miss it.

“I’m buzzing about another season with Stars. I loved every minute of last year’s campaign despite it working out as a ratio of about 10 training sessions for every one match played.

“The environment was really professional yet fun and I’m excited to pick up where we left off.”

Jones helped Wales to Senior Netball Europe Gold in 2013 and competed at the 2014 and 2018 Commonwealth Games.

“Considering we were a newly assembled team last year, looking back it’s really cool how quickly we got to know each other and saw progress,” added Cardiff-based Jones.

“It takes time to flow as a group on court but we showed that we have the skill, ambition and direction to achieve big things in this league in our final match against Wasps. If it can work against the best then it should work against the rest.

“We want to win it. On their day, anybody can beat anyone in this league so we want to go all the way to the Grand Final.”

Stars Head Coach Melissa Bessell says she is delighted to have signed Jones for another season.

“The only way I can describe Nia is one positive hurricane, relentless, passionate and fierce, severe and dangerous, but with every storm comes a beautiful rainbow,” said Bessell. “This gives a true picture of how she plays on court and I love it.”

Jones will again be joined by fellow Wales internationals Bethan Dyke and Georgia Rowe in the Severn Stars squad.