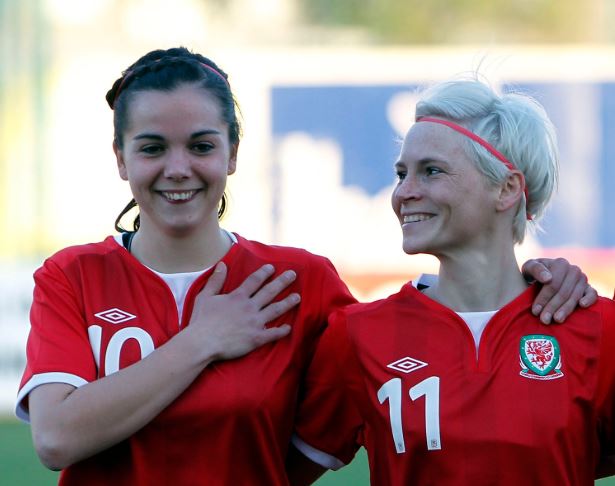 Gwennan Harries (left) and Jessica Fishlock of Wales during the Women Algarve Cup match between Wales and Ireland on March 2, 2012 in Ferreiras, Portugal. Pic: Getty Images.

Gwennan Harries was hoping for trips to Baku and Rome this summer, like so many others looking forward to the Euro 2020 finals. Instead, she will have to settle for recent memories being jogged by S4C this weekend – a night when the whistle blew and the touchline dancing began, as she tells Graham Thomas.

It may take her another year, but Gwennan Harries is still looking forward to jigging on the touchline when Wales take their place at Euro 2020.

In fact, the former Wales, Everton, Cardiff City and Bristol Academy striker believes there could be even more reason to dance with delight when the delayed finals eventually get going in 12 months’ time.

Harries was caught on camera doing a touchline tango with S4C presenter Dylan Ebenezer after Wales’ crucial qualification victory over Hungary last November – a landmark game that is being re-shown by the channel on Saturday evening (5.30pm).

The lens had zoomed into Gareth Bale bending to console a Hungarian opponent, but behind the Welsh captain Harries and Sgorio stalwart Ebenezer are seen to leap into each other’s arms and begin a jubilant jive.

“It was one of those spur of the moment things when you react like every other football fan,” says Harries, who scored 18 goals in 56 games for Wales before injury ended her career prematurely.

“We may be working on the broadcast, but deep down we are all huge Welsh football fans and it was just a moment of joy spilling out, that we had qualified for the finals.

“That side of him is never far away with Dylan. He’s like a little kid on match day who can’t stop beaming when Wales are doing well. He cracks me up.”

The S4C pitchside presentation team, who also included John Hartson, were not alone in dancing into the night on that memorable autumn evening six months ago.

Ryan Giggs had just guided Wales to a second successive Euros finals thanks to two goals from Aaron Ramsey in a dominant 2-0 victory, played out in a carnival atmosphere at the Cardiff City Stadium.

Much has changed since, though. The global sporting shutdown meant the tournament finals were one of football’s first big casualties of the year and they will now take place in 2021, even though the title of Euro 2020 remains.

The timing, though, could well work in Wales’ favour, insists Harries. She believes injured players such as Joe Allen and David Brooks have time to regain fitness, youngsters such as Dan James and Joe Rodon have 12 further months to improve, and even skipper Bale may benefit.

“I’ve been a little critical of Gareth Bale in the recent past because I didn’t think his performances were as good as they were for Wales a while back.

“But he proved again in that Hungary game that when those big, massive moments come, he delivers. It was the same with the goal against Croatia. His touches on the ball were incredible.

“Another year on and it may be that his situation with Real Madrid will be more settled and that could benefit Wales. The link with him playing in the USA was interesting, too, and that might lead to him playing more often.

“But even if he doesn’t play that often, Gareth has shown that he can still be a class above when he joins up with Wales. The passion and enthusiasm he has for Wales is still going to be there in another year and he’s still going to be one of the best players in the world.”

And it’s not just Bale who could be in a better place in June 2021, when Wales travel to Baku, in Azerbaijan, and Rome to play Switzerland, Turkey and Italy.

Gareth Bale played 88 minutes and provided an assist, as Wales beat Hungary and qualify to the next summer’s EURO 2020. pic.twitter.com/UgA7pZNE1I

“The delay also allows Joe Allen to get fit, which is huge. His loss was going to be monumental because he still really makes the team tick.

“The same goes for David Brooks, who was playing so well before he got injured, while the likes of Dan James, Joe Rodon and Ben Cabango have another year to develop.

“So, all in all, the postponement of the finals, although it‘s hugely disappointing, it may work out to Wales’ advantage.

“What we are seeing with a lot of those young players are the fruits of the work done by Osian Roberts and his staff when they worked on developing Welsh football.

“Ryan Giggs now has another year to work with all those young players and I think that’s just a really exciting prospect.”

One thought on “No Baku And Beyond For Gwennan . . . But Special Memories Of A Glory Night For Wales”