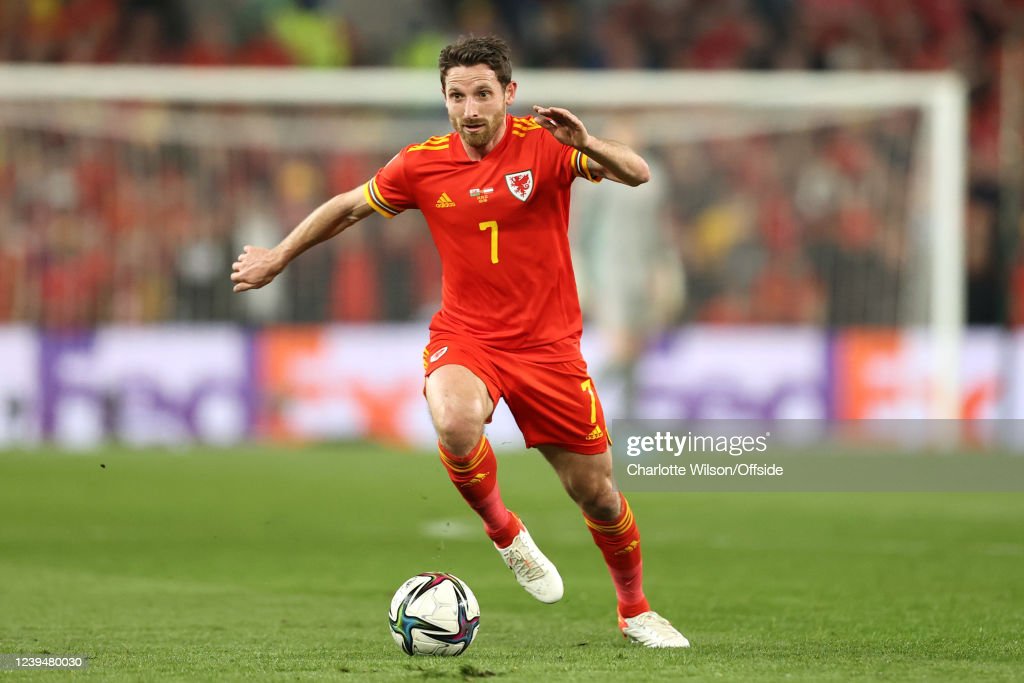 Joe Allen has been backed by Joe Ledley to defy medical predictions – and help guide Wales on another major tournament adventure.

Swansea City midfielder Allen has given Wales fans a major boost by taking part in training in Qatar after two months sidelined with a hamstring injury.

If he proves fit ahead of his country’s World Cup opener against the USA on Monday – a match that is live on S4C – it will revive memories of Ledley’s miracle comeback from a broken leg at Euro 2016.

The former Cardiff City, Celtic and Crystal Palace star amazed medics by playing just 35 days after breaking a bone in his leg.

“Back in 2016 they took me out when I was a doubt, but I had more preparation than Joe (Allen) has had,” says Ledley.

“The season had finished, so I had a little over a month to get ready. I worked so hard, I was in the best condition I ever was as a player.

“Joey is in a similar situation at the moment, unfortunately. But I’m sure when he gets his opportunity he will be ready, although we will have to leave it to the medical staff to decide whether he is okay.

“It was difficult to try and hold myself back, just as I was getting back to full fitness. Training with a fractured bone was quite difficult, the last thing you wanted to do was get into a tackle and someone fall on it.

“Joe’s injury is a muscle injury, so it is different. You don’t want to be overstretching in training, but once that whistle goes in a game situation, it just all floats to the back of your mind.”

Back in 2016 in France, Chris Coleman’s heroes won their opening group game against Slovakia, 2-1.

It sent confidence surging through the squad and ignited an epic journey that took Ledley and his teammates all the way to the semi finals.

This time around, he sees Wales’ first game as just as critical to their chances of progress.

“It is very difficult to predict, I think we will know a lot come midnight on Monday,” adds Ledley.

“That first game of the tournament is crucial. If you lose that, you are playing catch-up and you are trying to force yourselves to get the win.

“USA are not an easy team to play against, they have some fantastic individuals, so you never know.

“There’s no real pressure on them, so that could help the squad massively to do as well as they can for the country.

“It’s a tricky start to the group. If England don’t beat Iran, they will be desperate to get the win against Wales. So, Wales will have to be careful as they go further into the group stages.

“But I don’t see why Wales can’t make it through the group. It’s one of those groups where anything can happen, there’s nothing to be frightened about.

“This Welsh team has been in these big occasions before, so there is always a chance.”

Ledley has been hugely impressed with the job Robert Page has done since following Coleman and Ryan Giggs as manager, and believes the team spirit Page has created has echoes of 2016.

“I see a similar unity and feeling in the group. That had a massive part to play in what we achieved in 2016.

“We were incredibly close off the pitch as a group, nobody was bored, nobody had an argument. Everyone enjoyed each other’s company. It was the best time of my career with Wales.

“We didn’t want to go home, as a team or a family. Off the field will be key for this team, the social side has a big impact.”

Whatever happens to Wales over the next two weeks, Ledley is determined to enjoy himself in a role that was never available to him as a player.

The man with the most iconic post-match dance moves in Welsh football is putting his duties with the Joe Ledley Football Academy on hold and joining the rest of the Red Wall in Doha.

“I’m doing it my own way, I’ve paid for my own flights, my own accommodation and tickets.

“Now I am doing it from that side, it will be enjoyable. Interacting with the other fans and watching it without the pressure, just seeing the other side of it, will be really interesting.”

Live coverage of the match between the USA and Wales in the 2022 FIFA World Cup, from the Ahmad bin Ali Stadium in Al Rayyan, Qatar.

Watch live coverage of USA v Wales from 6.00pm on S4C, with Osian Roberts, Gwennan Harries and Owain Tudur Jones as part of the team. S4C will show every Wales match in the 2022 FIFA World Cup.