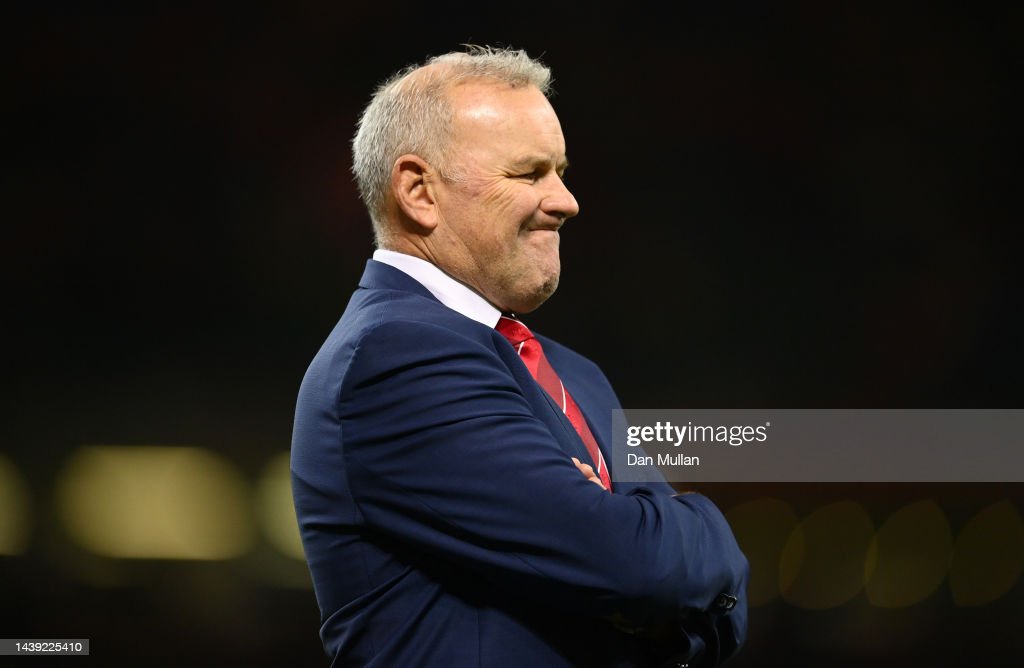 That was the gist of Wayne Pivac’s reaction to arguably the most embarrassing defeat in the history of Welsh international rugby.

Four months ago, the Wales national coach was being hailed for achieving something no predecessor had even managed – a Test victory over the Springboks in South Africa.

This weekend, he is in a very different position after becoming the first Wales coach to lose at home to Georgia.

The calls to replace Pivac as Wales coach are getting louder and the 13-12 defeat against Georgia, which is undoubtedly their worst in the professional era, will make it difficult for the Welsh Rugby Union to resist those calls.

But while he cut a calm figure in the post-match press conference, he did admit that his future is out of his hands.

“You’ve seen a lot of results at the moment that are going against the formbook, and our result is one of those,” said Pivac when asked about his future. “Where you are going with that question you probably want to ask somebody else but I’ll be here rolling the sleeves up starting first thing in the morning like all the other coaches in the group. We’ll come together Sunday night and we’ll formulate a plan for the week.

“We are here to do a job, we are totally focussed on building towards the World Cup. This is clearly a setback, and we are not proud of that result.

“It is not a nice place to be. Seven days is a long time in rugby, and we will look at it all, including pulling the game to bits.

“We have to make sure we get the performance we are all happy with and proud of on seven days’ time.”

This result was all the more surprising given Wales had raced into what seemed like a very comfortable 12-3 lead at half-time with two tries from Jac Morgan. But a superb try from Alexander Todua along with a penalty two minute from time from Luka Matkava sealed Wales’ fate.

Wales looked totally rudderless on the field of play, especially during the second-half, and captain Justin Tipuric looked stunned after the game. When Tipuric was asked what his message would be to the public his answer summed up how low Wales have fallen under Pivac.

“It’s something they’re probably used to unfortunately in the last few years in Welsh rugby, up and down,” he said. “You have to give Georgia credit.

“It can’t just be all down to us. Georgia finished the game very well. We’ve had some bad results, even when Gats (Warren Gatland) were here. We lost to Samoa when we were hot favourites for that game.

Pivac has overseen two of the worst home defeats in Welsh rugby history in the last 12 months. Under his coaching set up Wales have not improved in any facet of play & they seem to have no cohesive style of play. Apart from a few lucky wins results have been dreadful. Time to go

“It’s tough to be the first Welsh team to lose to Georgia. Unfortunately, you have those tough days in your career, and now it is all about how we react.

“We obviously planned to finish this autumn strong and get momentum after Argentina. Unfortunately, we didn’t do that today. We let ourselves down.”

The Georgian changing room was the complete opposite to Wales with scenes of utter joy after the final whistle. They have been trying to force their way into the Six Nations for many years and their captain Merab Sharikadze has urged World Rugby to take note.

“Hopefully, the heads of rugby will have watched this game,” said Sharikadze. “It would be unfair if they pretended this didn’t happen.

“Hopefully, they will make some moves. Sometimes something is so obvious that you can’t run away from it.

“We’ve beaten Wales in Wales so it’s so obvious. They can’t pretend they haven’t seen this.

Let’s not kid ourselves, if Pivac is sacked, it’s not going to be Scott Robinson, Shaun Edwards or Wayne Smith taking charge – it’s going to be Dai Flanagan, Ioan Cunningham, or someone like that.

No disrespect, those guys are capable coaches, but that is where the WRU is at.

Wales have won just three of their 11 games this year and Pivac – who succeeded his fellow New Zealander Warren Gatland after the 2019 World Cup – will now inevitably feel the heat going into next weekend’s clash with Australia.

The former Wales stars Sam Warburton and Jamie Roberts were vocal in their criticism of Wales’s performance after they failed to score a point following the flanker Jac Morgan’s second try in the 24th minute.

Tedo Abzhandadze kicked Georgia into a second-minute lead but Wales pounced in the 20th minute after the lock Adam Beard won lineout ball and the flanker Morgan surged over for a try that Rhys Priestland converted, making it 7-3.

Morgan struck again just three minutes later when he collected a pass from the scrum-half Tomos Williams and Wales thought they had scored again eight minutes before the break when Josh Adams finished impressively after a kick and chase, but Williams’s pass to him was ruled forward.

It was a let-off for Georgia, and they accrued no further damage on the scoreboard as Wales led 12-3 at half time.

Loss to Georgia up there with losses to Romania, Western Samoa and Italy. Easy to say ‘get rid of Pivac’ but failure is collective. Welsh rugby needs direction. It needs to pull together, yet instead it’s tiresome blame game. Self-interest needs to be put aside for greater good

Georgia could not capitalise on a yellow card for Alex Cuthbert early in the second half but cut the deficit to two points when Sandro Todua collected a well-placed kick and crossed unopposed in the 59th minute, with Abzhandadze’s conversion making it 12-10.

A long-range penalty from the replacement Luka Matkava two minutes from time then inflicted immeasurable pain on Wales – and the countries will meet again at next year’s World Cup.

Pivac said: “We will review everything, and we will leave no stone unturned in the review process. In the second half we had no continuity, and we were probably second-best in a lot of the collisions and the aerial game.

“Every time you lose a game, it leaves a scar. Next week is no different. We need a big week and a very strong performance.”