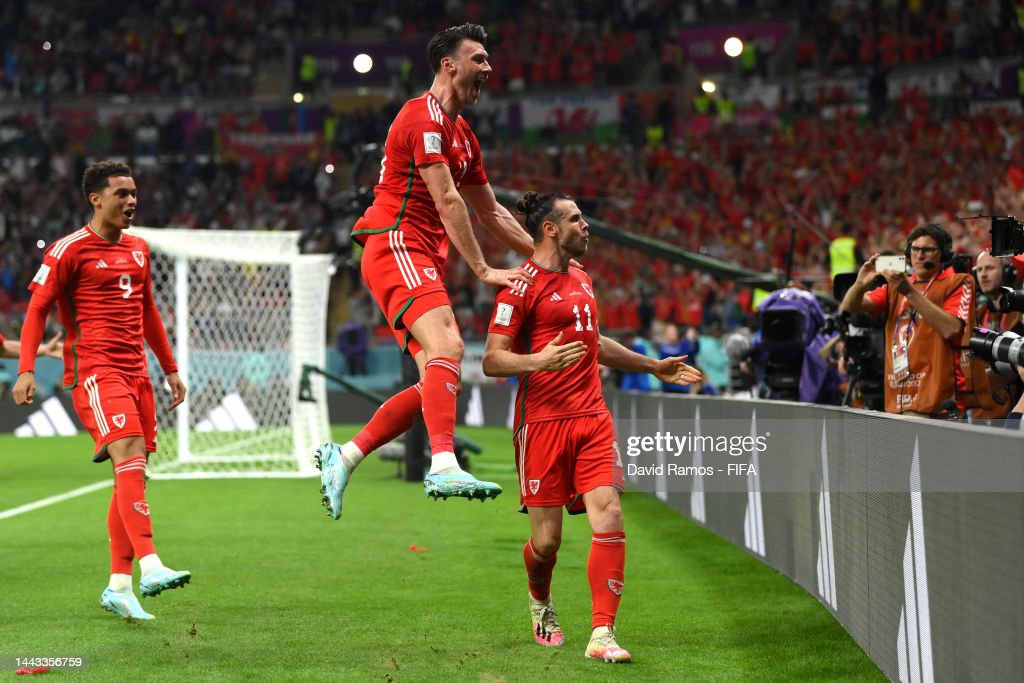 Since it had been 64 years since Wales were last at a World Cup, Robert Page could have been forgiven for being sketchy about their tournament form.

The Wales manager didn’t go for Ivor Allchurch and Terry Medwin up front, but, strangely, he did appear to forget the impact Kieffer Moore has had on his team over the past couple of seasons and the anxiety his presence causes opponents.

It meant that Moore did not appear until the second half at the Ahmad Bin Ali Stadium, where his eventual presence against the USA transformed Welsh fortunes – and the match – and enabled Page and his players to leave with a priceless 1-1 draw.

Gareth Bale did what he always does and wrote his own script. His goal from the penalty spot, after he had been brought down with his back to goal, was another emphatic statement of his genius for rising to the big occasion.

But this game did not turn on Bale’s brilliance. It was altered in shape by the introduction of Moore.

It was Moore who restored the faith of the passionate Red Wall after a subdued first 45 minutes and made them believe.

It was Moore whose size and muscularity – allied to impressive mobility – destabilised the Americans, turning this match from a free-wheelin’ MLS passing festival to the harder-edged Championship-style contest of a big target man running the channels.

Without the Bournemouth striker, there would have been no concerted pressure that led to Bale’s penalty, no draw, and no open and clear road ahead, perhaps to the knockout stages if Wales can overcome Iran on Friday.

“I thought the way they (USA) played in the past, I thought we could play through the middle and play beyond their front three,” said Page afterwards.

“But we didn’t get any of our players on the ball and we were getting wave after wave of their attack. Kieffer made a massive difference for us.

“In the second half it was different. We played over the press and got Kieffer to hold the ball up for us.

“Lessons have been learned from today. It was important we didn’t lose the game. We have Brennan (Johnson) who came on and made the impact, Kieffer who came on. We have strength in depth and more options on the bench.”

As for Wales’ strangely disjointed and low quality first half showing, Page admitted: “We just needed to be braver on the ball.

“I am not sure if it was the occasion, first game nerves, maybe. But when you have Aaron Ramsey, Harry Wilson, and Ethan Ampadu, you want them on the ball. I wanted them to be braver on the ball.

“We said we didn’t want to lose the first game. It was important we didn’t lose it. It was a really important point for us. In the last ten minutes, if anyone was going to get the winner it was us.”

World Cup Group B is topped by England, who overwhelmed the Iranians 6-2 earlier in the day with the kind of physical dominance that Moore can bring.

The last thing the team bottom of the group will want to see on Friday night is a powerful 6ft 5in centre-forward with a renewed sense of self-belief.

Even so, Page is happier for Wales to play the role of snappy underdog – if not in the one-off game against Iran, but certainly in the group as a whole.

“But there will be a few surprises along the way.”

A major one would be to see Page omit Moore from his starting line-up again in the tournament after a first half which could easily have ended with the USA ahead by two or three goals instead of just one.

That came when Tim Weah finished coolly after a superb run and pass by Christian Pulisic, the best player on the field in a one-sided opening period.

Wayne Hennessey’s reactions and some sloppy finishing from the American kept the situation retrievable for Wales, but Bale admitted: “It was not a good first half.

“They played really well and we were poor. But it was a great talk from the gaffer at half-time, we changed a few things – nothing I wanna share too much – and came out battling.

“We looked like we were going to win the game from the second half. It’s a great point, we showed character, and we go again.”

He may have been clattered from behind, but there were never any doubts that the player who inspired Wales’ appearance in these finals for the first time since 1958 was going to be the man who added another chapter.

“Yeah, I was always gonna take the penalty. No doubts in my head. I feel like I have to step up, and I’m happy to do so.

This team never gives up! Great fight from the boys! We look forward to Friday! ❤️🏴󠁧󠁢󠁷󠁬󠁳󠁿 #FIFAWorldCup pic.twitter.com/1tUJXiqqdX

“It’s incredible to have a World Cup goal but I’d rather have the three points. Our second-half performance was fantastic so we’ll take a lot of confidence. I felt a little bit tired towards the end – I can’t believe there were nine minutes added on – but we have to dig deep for our country. We always do.”

So, Wales, Bale – and Moore – move on to Friday and a return to the same stadium where a victory and a likely American defeat to England would put Wales in a commanding position for qualification for the last 16.