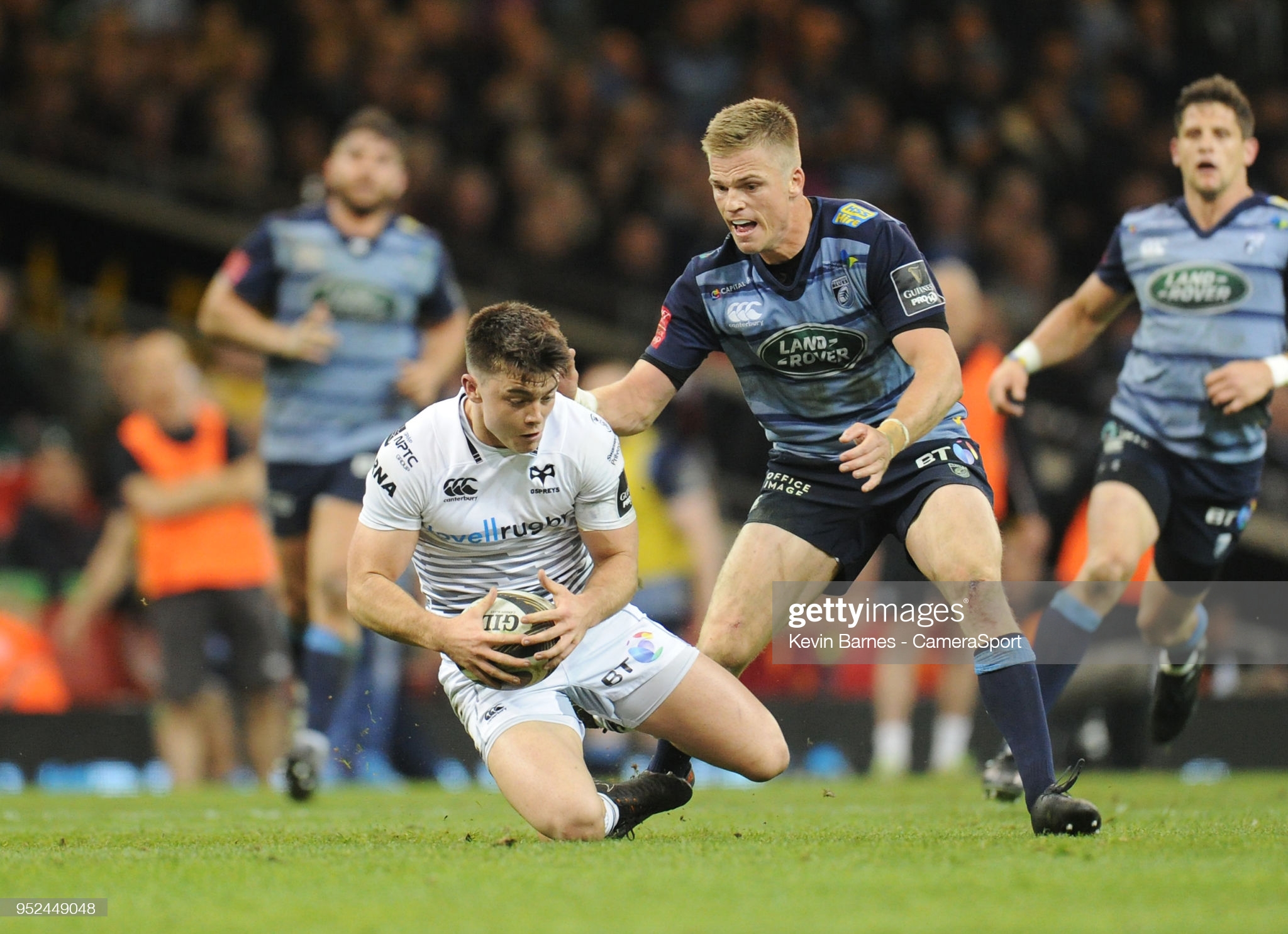 With the autumn internationals over, two of the Welsh regions are back in action this weekend. The Dragons host Edinburgh on Saturday, while on Friday night it’s the Ospreys who kick things off away in Connacht. The Scarlets and Cardiff are both attempting to return from South Africa after the postponement of their fixtures due to the new travel restrictions. Without action for five weeks, all the regional players have had to be patient – none more so than Reuben Morgan-Williams, as he tells Graham Thomas.

Reuben Morgan-Williams aims to put the finishing touches to another Ospreys victory on Friday night.

The former Wales U20s scrum-half is set to come off the bench at some stage against Connacht and complete the job that skipper Rhys Webb will have started.

Morgan-Williams has made five appearances in the United Rugby Championship so far this season – all of them as a replacement – and has been on the winning side every time but one.

The 23-year-old is having to bide his time behind Webb, especially since the former Toulon player fell out of favour with Wales, and the first game back after the autumn Tests in Galway – which is live on S4C – will be no different.

“It’s always tough when you’re coming off the bench. You want to make your mark but also do what is best for the team,” says Morgan-Williams.

“But I’m always glad to be involved and hopefully I can push for that starting spot very soon.”

This time last year, the former Neath No.9 earned six successive starts for the Ospreys as Webb was required for international duty.

But with the former Lions tourist passed over by Wayne Pivac, the pecking order at regional level has been restored with Morgan-Williams having to content himself with soaking up as much wisdom as he can from the player he one day wants to replace.

“Webby went away with Wales this time last year and that gave me an opportunity to get some games under my belt,” says Morgan-Williams.

“That helped me come on leaps and bounds. But on the other hand, it’s always good to have someone like him around. He was here when I first started coming through, so I learned a lot from him before.

“He is a big-game player and so there’s a lot to benefit from his experience. His skill set is one of the best in the game and in a pivotal position like No.9 you always want to keep working on your skill set.

“He’s also really helped with game management on the field because he is so good at running games from nine. We put a lot of pressure on our half-backs as game managers and it’s something I’ve improved in the last 18 months.

“It’s a feel thing. The more you do it, the more natural it feels.”

Webb is not the only old head being tapped into by Morgan-Williams and the other youngsters named in a young lineup that does not include Wales’ autumn stars Gareth Anscombe, Alex Cuthbert, Tomas Francis and Adam beard.

Skills coach James Hook has also proved an influence in Morgan-Williams’ progress – particularly when Hook was still playing for the region and the scrum-half was making the step up from Neath.

“Hooky was a childhood hero of mine. It was surreal playing with him because I had watched him playing when I was a kid growing up in Neath.

“I used to love the way he played the game. He’s also just a great guy, generally. I always watched him closely because he was a Neath boy. He was my hero.”

Looking forward to this one tomorrow night. A fair few players with points to prove after being overlooked by Wales during the autumn. https://t.co/077F6f9rwH

Wales Sevens international Morgan-Williams was coached by another ex-scrum-half, Pat Hogan, when he was at The Gnoll and believes his experience of playing in the Welsh Premiership has given him an edge over those who these days mostly come up through regional academy teams.

“I learned so much playing for Neath that I don’t think I would have done coming through an academy.

“You are getting an introduction to senior rugby. You are not just playing against boys who are all your own age. I learned a lot from the older heads at Neath, players who had been around a bit.”

That’s the kind of know-how Ospreys head coach Toby Booth will hope Morgan-Williams can show against a Connacht team who have won three of their last four games at home.

The Ospreys, though, are aiming to build on four victories out of five before the November break and Morgan-Williams adds: “We are playing well, so hopefully we can keep that going at Connacht.

“It will probably be wet and windy there like it normally is. They recently beat Ulster there, so we know how difficult it can be. We need to front up.

“It has felt a bit like pre-season x 2 for the last few weeks and we have had to focus on how we can improve as we have a long block of matches going into Europe.

“It’s tough from a momentum perspective because we were doing well with four wins out of five, but we have to pick things up again straight away.”