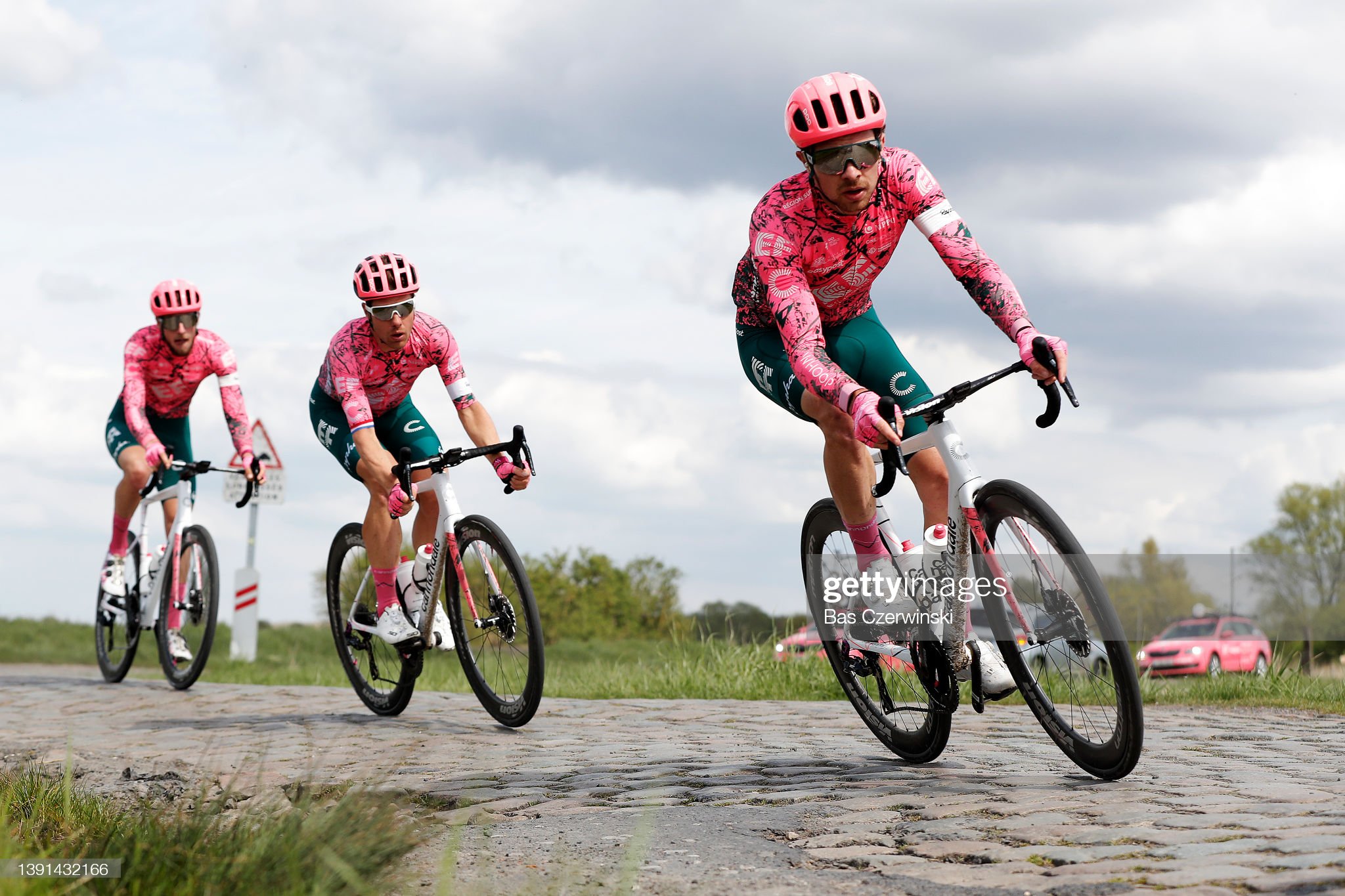 Owain Doull has been backed to fully emerge from the long shadow of Geraint Thomas this weekend when the Giro d’Italia begins in Hungary.

It’s a shadow that was cast from Cardiff and the Maindy Flyers cycling club 16 ago when Doull was starting out and Thomas had already departed.

Doull continued to operate mostly in the shade of Wales’ greatest cyclist at Team Sky, which then became Ineos Grenadiers, in races and tours across Europe.

But this weekend, he will be the Welshman who takes centre stage when he lines up for his first crack at the Giro, the opening stage highlights of which can be seen on S4C on Friday night.

Whilst former Tour de France winner Thomas is absent as he continues his comeback from injury, Doull will be part of the line-up for the team he joined last year, EF Education-EasyPost.

According to Alan Davis – the esteemed coach who guided the fledgling careers of Thomas, Doull, Luke Rowe and Elinor Barker at Maindy Flyers – the switch of teams could prove a pivotal moment for 29-year-old Doull.

“I think moving from Ineos is giving Owain opportunities he would not have had otherwise, because the Ineos squad is so strong,” says Davis.

Professional Cyclist & Olympic Champion, @owaindoull, is the proud owner of an Asgard x7! – “I can honestly say having an Asgard shed has changed my life. It helps that I know my bikes are safe and secure from theft and the elements outside” – Owain https://t.co/5t9IN1GYsY pic.twitter.com/Gr9bmumgnw

“Geraint is a truly great rider and has lit a path for other Welsh riders to follow. Hopefully, with EF, Owain will now have the chance to follow that path.

“Luck plays a large part in any career, but if it were talent alone I’m certain Owain will be a great success.”

With the cream of the world’s top cyclists to tempt their way with the biggest of chequebooks, that tough competition at Sky and then Ineos meant Doull only once made the team for a Grand Tour.

That was the Vuelta – the great tour around Spain that takes places in August and September – which Doull rode in 2019.

Otherwise, the presence of so many top riders ensured that even a support role for the likes of Thomas, Chris Froome and Egan Bernal did not come around very often in the major races.

When Doull decided to move on from Ineos to EF last September, one cycling website described the switch as moving from the sport’s rich kids to the cool kids.

EF certainly do not have the big guns like Ineos – although they can boast the Danish rider Magnus Cort, who won three stages of the Vuelta last year – but the American team do possess a big following attracted by their flamboyance and brash appeal.

Doull is certainly easier to spot kitted out in bright pink than he was in the regimental black of Ineos and for Davis there are plenty of other reasons to get excited about watching Doull on the roads around Italy over the next three weeks.

“I can tell you we are all excited to see Owain in his first Giro, following in Geraint and Luke’s footsteps and continuing to be an inspiration to so many youngsters in cycling, and especially at Maindy Flyers.”

Solid riding from some of our Junior boys today in the @avid_sport racing @ Odd Down. Some wet and cold conditions out there today. Well done boys 👏 @n_fusesports @abloc_physio @AxminsterTools @SkeneCycles #DreamBig pic.twitter.com/mUu5bg8fLY

Davis remembers the young Doull as dedicated and resourceful with a competitive streak other riders under-estimated at their peril.

“Owain was a quiet and unassuming boy. He was not an instant star, with more than his fair share of bad luck, but that never fazed him.

“He always came back with a smile on his face, keen to learn and improve.

“By his early teens, through steady progress and consistent hard work he was in the leading bunch in national races, regularly achieving top three finishes and winning a few.

“He caught the eye of British Cycling and was recruited to the talent team. Like Geraint and Luke, what he has achieved since them has been incredible.”

Doull’s pink jersey and helmet will be spotted on the start line on Friday, along with Cort and other general classification hopefuls Esteban Chaves and Hugh Carthy.

The Giro starts on Hungarian soil, with a day two time trial on Saturday in Budapest, and then on to Lake Balaton before the peleton head for Sicily and then on to the Italian mainland.

The day’s highlights from the Giro d’Italia – Stage 1.

Watch every stage of the Giro d’Italia live on S4C, from 2pm every day from Friday, with an evening highlights show every evening. Highlights of stage one will be shown at 9.35pm. Follow @seicloS4C on Twitter and Facebook for previews, news and clips from the race.