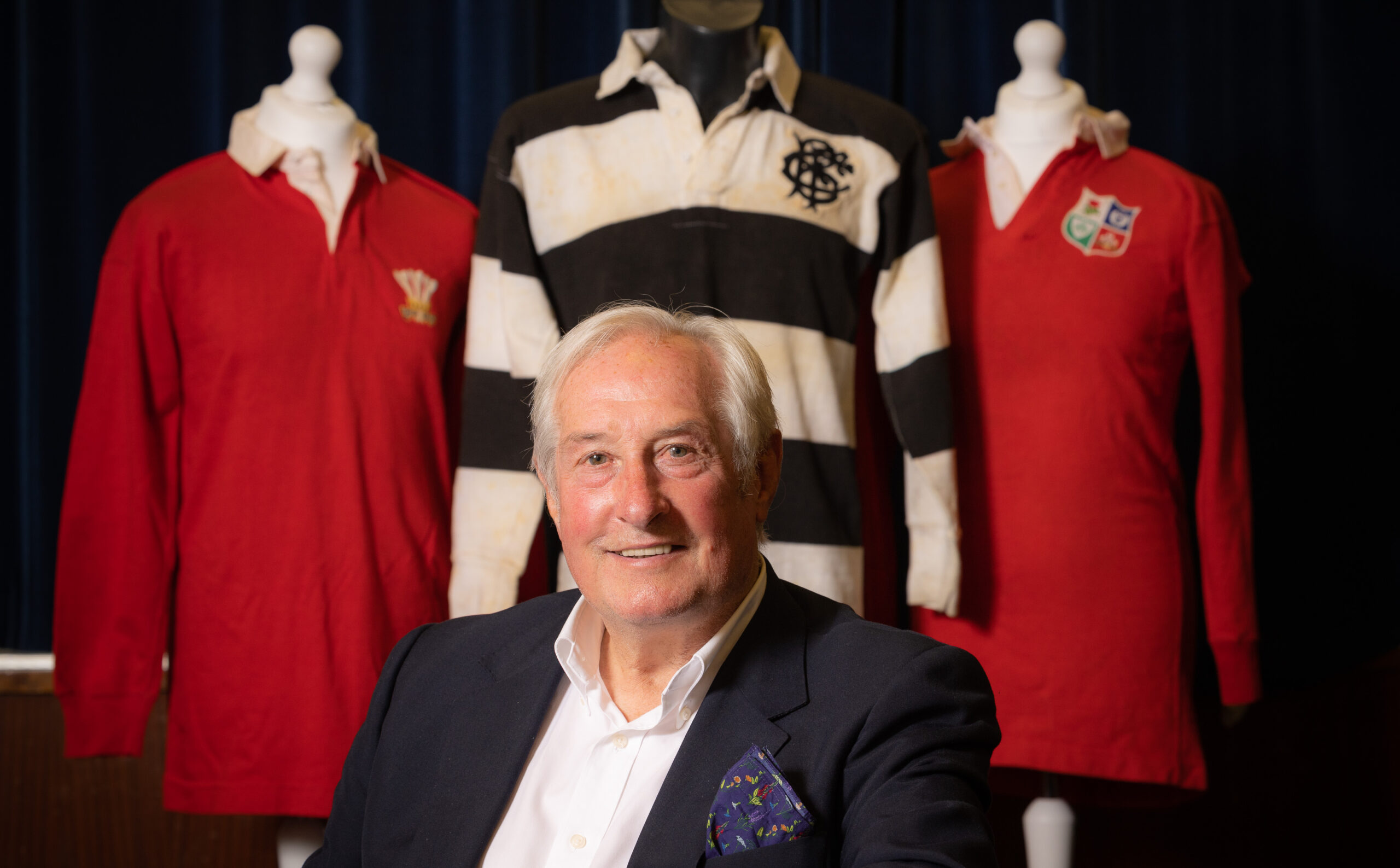 Sir Gareth Edwards with three of his match warn shirts, including the Barbarian shirt worn when he scored “The Greatest Try” against New Zealand in 1973.

Even at the age of 75, a landmark he reached today (12 July, 2022) Sir Gareth Edwards is still leaving his mark on global rugby proceedings.

The man consistently voted as the greatest player of all-time after a playing career that included 53 consecutive Welsh caps, three Grand Slams, five Triple Crowns and back-to-back Test series triumphs with the British & Irish Lions, decided he would say it as it is last week when asked about the Springboks’ team selection for the second Test.

It was the scrum half’s considered opinion that Jacques Nienaber had ‘disrespected’ Wales by making 14 changes to his starting XV after scraping through in the first Test with an 83rd minute penalty.

On top of that, Sir Gareth urged Dan Biggar’s men to go out and give the Springboks ‘a tonking’. It became the major talking point in build-up to the game in Bloemfontein and Biggar’s boys were happy to oblige and give the great man an early birthday present.

There is so much for him to look back on with such pride since he was born in the Welsh mining village of Gwaun-cae-Gurwen in 1947. A scholarship to Millfield and his incredible talent kept him away from the pit and sent him on his way to one of the greatest of all Welsh sporting careers.

He first played for Wales at 19, captained the side at 20, went on the first of three British & Irish Lions tours at 20 and won the first of his five Triple Crowns at the age of 21. He set records for the most caps for Wales (53) and the most tries (20). He then played in eight successive Tests for the Lions as they beat New Zealand on their own patch in 1971 and South Africa in 1974.

Happy Birthday / Penblwydd Hapus to the only and only Sir Gareth Edwards on his 75th birthday. Have a great day! pic.twitter.com/40JI9D0nDt

In tandem with Barry John at half-back for Wales and the Lions, and then the recently departed Phil Bennett for the same two teams, he kept the Welsh flag flying high around the globe.

On the sporting stage he stood supreme, but the way he has lived his life since exiting his personal theatre of dreams at the old Cardiff Arms Park after winning yet another Grand Slam in 1978 has added even more lustre to his wonderful life to date.

As an ambassador for Wales he has been exceptional and, as last week proved, when he speaks, the world listens. Yet, even though he has an array of wonderful achievements for Wales and the Lions behind his name, there is one exceptional moment from his career that is as vivid for most rugby fans today as it was almost 50 years ago when he scored ‘That Try’ for the Barbarians against New Zealand.

“I guess that has to be my favourite try because so many people still want to talk about it. You could sense there was going to be something special about that game,” recalled Gareth.

“Phil Bennett lit the touch-paper. What many people sometimes don’t understand is that the game against New Zealand was being heralded as a fifth Test for the All Blacks on their tour and another Test against the 1971 Lions.

“Phil hadn’t been on that tour, it was a trip dominated by Barry John. Barry had retired by the time this game came along and it really was Phil’s big moment to shine.

He had to ask for special permission from the Barbarian committee to invite Carwyn James, the 1971 Lions coach, to come and help us prepare for the game.

“They eventually agreed, but said he could only talk to us from the sidelines, but couldn’t go onto the pitch to coach! He got us all in the right frame of mind and his last words to Phil were ‘go out and play as if you were playing for Llanelli at Stradey Park’.

Wishing Sir Gareth Edwards, by common consent the greatest rugby player of his or any other generation, many happy returns on his 75th birthday. Set records that cannot be matched let alone broken, like never missing a Wales game from start to finish: 53 in 11 years. Phenomenal.

“That’s exactly what he did and I can’t thank him enough for that. His was a terrible loss to so many of us last month and it hurt deeply. For as long as I tell the story of the Baa-Baas try I will ensure he is given the credit he deserves for setting us all up for a taste of glory.

“I’ve always been fascinated by the pleasure that try still gives to so many people. It is also amusing to try to keep count of how many people reckon there were there at the ground on the day. I think I’m up to around 200,000 at the moment!

“Wherever I go in the world, people always seem to want to talk about it. Just before the 1995 World Cup in South Africa I was invited to go fishing in the middle of nowhere in Russia. It was a three hour helicopter ride from Murmansk.

“The helicopter had seen service in the war in Afghanistan and had bullet holes in its sides, but it got us to our destination. I ended up staying in a village where the mayor, who was a former nuclear submarine commander, took me back to his house, brought out a DVD, shoved it in the telly and up came that try!

“I said ‘you’re kidding me, someone put you up to this’, but he said he was a rugby fan. So, obviously, it has had a big impact on my life – there’s no getting away from it, no matter where you are!”

There are always questions to the great man about his greatest try, opponent, team and, of course, his favourite Lions tour. He went on three of them, two to South Africa, and in 10 Tests managed to win five and draw three.

He scored (we think) the greatest try ever, won a total 53 consecutive caps for Wales between 1967 and 1978, and to this day is also Wales' youngest ever captain. Name a better rugby player – we can't. #GarethEdwards pic.twitter.com/PHlcDGN4K8

“I guess the best way to put it is that 1971 in New Zealand was the greatest achievement, given no other Lions team has won a series against the All Blacks, while going through the series unbeaten against the Springboks in 1974 was the most enjoyable,” added Gareth.

“We didn’t lose a provincial game in South Africa and the former Cardiff Blues full back Ben Blair, himself an All Black, reminded me once that 1971 Lions had gone through his country without losing to a provincial side. That blew his mind.

“They were great days and it was a privilege to play with so many great players.”

The real privilege was being old enough to see Sir Gareth play in his prime. He had it all – speed, explosive power, and piston-like hand-off as well as a brilliant pass and wonderful rugby nous.

Will we see his like again? If we do, we’ll be very, very honoured.