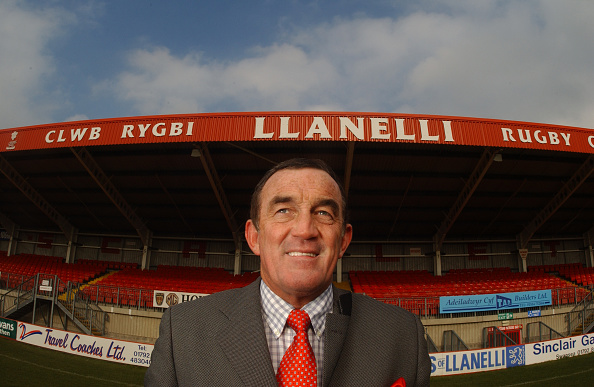 I once had reason to walk down the high street in Llanelli one afternoon, alongside Phil Bennett.

It felt like the scene from a sentimental Hollywood film. Women shouted their hellos from every shop front, men yelled down from scaffolding and every other car beeped cheerily and drivers waved at the town’s most famous and best-loved resident.

But the really striking thing was that as the Scarlets’ greatest ever rugby player responded, he seemed to know the name of every well-wisher.

That was Phil Bennett, a humble hero, a man rooted in his community so deeply and genuinely that any trace of immodesty was impossible to imagine.

Few performers can have embodied the true soul of a nation’s sporting identity in the way Bennett did with rugby in Wales.

Small, but with an instinctive courage to dare, he was as captivating to watch for joyful fans as he was difficult to get hold of for thwarted opponents.

It was a dazzling talent that made him one of the game’s most treasured players, held in affection throughout the world for moments like the side-stepping sparks that ignited the try of the century for the Barbarians against the All Blacks in 1973.

Or the dancing feet that had Scottish players sprawled on the ground at Murrayfield back in 1977.

Phil Bennett has died at the age of 73

He is regarded as one of the greatest players to wear the number 10 shirt for Wales and the Lions pic.twitter.com/47qSk83TRC

But in Wales he was genuinely loved, a true working class hero who combined rousing political team talks before taking on the English, with artistry on the pitch and modest generosity off it.

He was Che Guevara mixed with Fred Astaire.

When they recently unveiled a giant wooden statue of him in his home village of Felinfoel, former Wales international Tom Shanklin spoke for many when he said: “Pretty good . . . but it should have been carved out of pure gold.”

I was privileged to have witnessed the gleam of that gold and the effect it had on others for over 20 years as his newspaper ghost-writer, biographer and BBC broadcasting colleague.

At stadiums around the UK and the wider the world – while covering the Scarlets, Wales or the Lions – a recurring scene would play out.

In whatever clubhouse – Cardiff, Leicester, Harlequins, Ellis Park in Johannesburg or Eden Park in Auckland – there would be young fans looking for items to be signed by, or, more recently, a selfie with, a current player.

At some point, their parent would tell them to go and get something signed by the small, dapper, dark-haired man working with the broadcasters because he was a giant of the game and the most generous, warm, and accommodating man they could meet.

We are saddened to learn of the death of Phil Bennett.

Phil toured with the Lions in 1977 and was a key member of the revered Invincibles of ’74.

Our sympathies are with his family and friends at this time. He will be greatly missed.

I had the privilege, and the fun, of helping him pen his autobiography a few years ago. It was his second go at telling his life story – he did his first when he retired from playing – but the encore was well worth it. Only immortals can get away with two versions of the same life.

I also used to write his weekly newspaper column, firstly for the South Wales Evening Post and then also for the Sunday Mirror and occasional magazines pieces. We wrote over a thousand articles on whatever was the hot rugby topic of the day or the big game that was about to be played, or had just finished.

It would require a 15-or-so minute face-to-face chat or phone call and then a lot of scribbling. Here’s a secret of the trade that won’t surprise you. Ghost-writers sometimes have to skip the phone calls and rely on memory, what their ‘voice’  has said before.

Of over 1,000 Phil Bennett columns, I had to rely on memory for three – once when his mobile phone died after an international in Paris, another occasion when the phone network crashed in South Africa, and once more on a very rare Saturday when he didn’t watch the Scarlets or Wales, because he was at a family wedding.

The other 997 times he answered after two rings.

Born in 1948, Bennett was a good enough footballer to be begged to sign for Swansea City, but turned them down because he enjoyed the sociability of rugby.

Phil Bennett was all over Welsh rugby’s greatest try – timing of pass to David Burcher, killer sidestep, two Scots on the floor and ball propped under the chin. Just marvellous. pic.twitter.com/kLO7ki8Ww7

After youth days at Felinfoel, he joined Llanelli where he spent 16 seasons and became the famous Scarlets’ greatest ever player.

Blessed with electrifying pace and a jagged sidestep that was as instantly lethal as a lightning fork, he was the natural inheritor to the No.10 shirt for Wales that had been worn by Barry John.

But he was much more than just a running, jinking fly-half. He was a playmaker, tactician, and deadly goal-kicker who scored a total of 3,219 points in his career.

He won 29 caps for Wales – a feat that took 10 seasons in the days when international matches were far more scarce than the ten-a-penny of nowadays – and went on two British and Irish Lions tours.

The first – in 1974 to South Africa – was arguably the Lions’ greatest as they came home undefeated after 22 matches, with Bennett in his devastating prime on the hard, fast surfaces.

The second, he led as captain to New Zealand in 1977, was not as successful and he later admitted it was too soon to be away for months after a devastating family bereavement.

Within a year, he had retired from Test rugby at the age of just 29, but not before a glorious goodbye as he skippered Wales to the 1978 Grand Slam – their third of the golden era of the Seventies.

But he always maintained the game that provided his greatest satisfaction was the day he helped Llanelli beat the All Blacks in 1972.

A rare privilege to have been asked to write about the life and times of Phil Bennett. My deepest sympathy his wife Pat, sons Steven and James, their families and friends. https://t.co/6sDvNlv5sT

It typified the bond of connection he felt with the club and the town, a sense of identification almost entirely gone in the modern game.

He played for the Scarlets until 1981 and said after his final game for the club, “When the final whistle went, I sat in my traditional spot in the dressing room, pulled the scarlet jersey off for the last time.

“I felt ever so bad. It was a terrible feeling. Then I looked around the room and I thought of all the great players and all the great traditions that had gone before me and I thought: ‘Hell. You have been part of the greatest club in the world.’

It wasn’t his last game of rugby, though. Far from it.

When he was in his 40s he stood out as the only player whose light hadn’t dimmed, whose sharpness had not been blunted, when he played for a Welsh golden oldies side against England.

A few years later, he turned out in a charity match against a team of serving firemen, fit young blokes in their twenties and thirties.

“Was he any good?” I asked the late Norman Lewis, veteran rugby journalist who covered the Scarlets and happened to have been at the game.

“Not bad,” he replied. “Maybe not quite at the level he was at in 1978, but it was still the best performance by any outside-half in Wales I’ve seen this season.”

He became a widely admired TV and radio pundit with the BBC and for over 20 years was the voice of rugby in the Sunday Mirror with an army of loyal readers.

He also nurtured hundreds of schoolboys, including the likes of Jonathan Davies, working in sports development in Carmarthenshire.

Those inspiring team talks – one about English exploitation of Welsh water, coal and property in 1977 – are the stuff of legend, with accounts only available in print.

The tries, the scorching breaks and zig-zag patterns of his boot heels, will thankfully live on forever on YouTube.