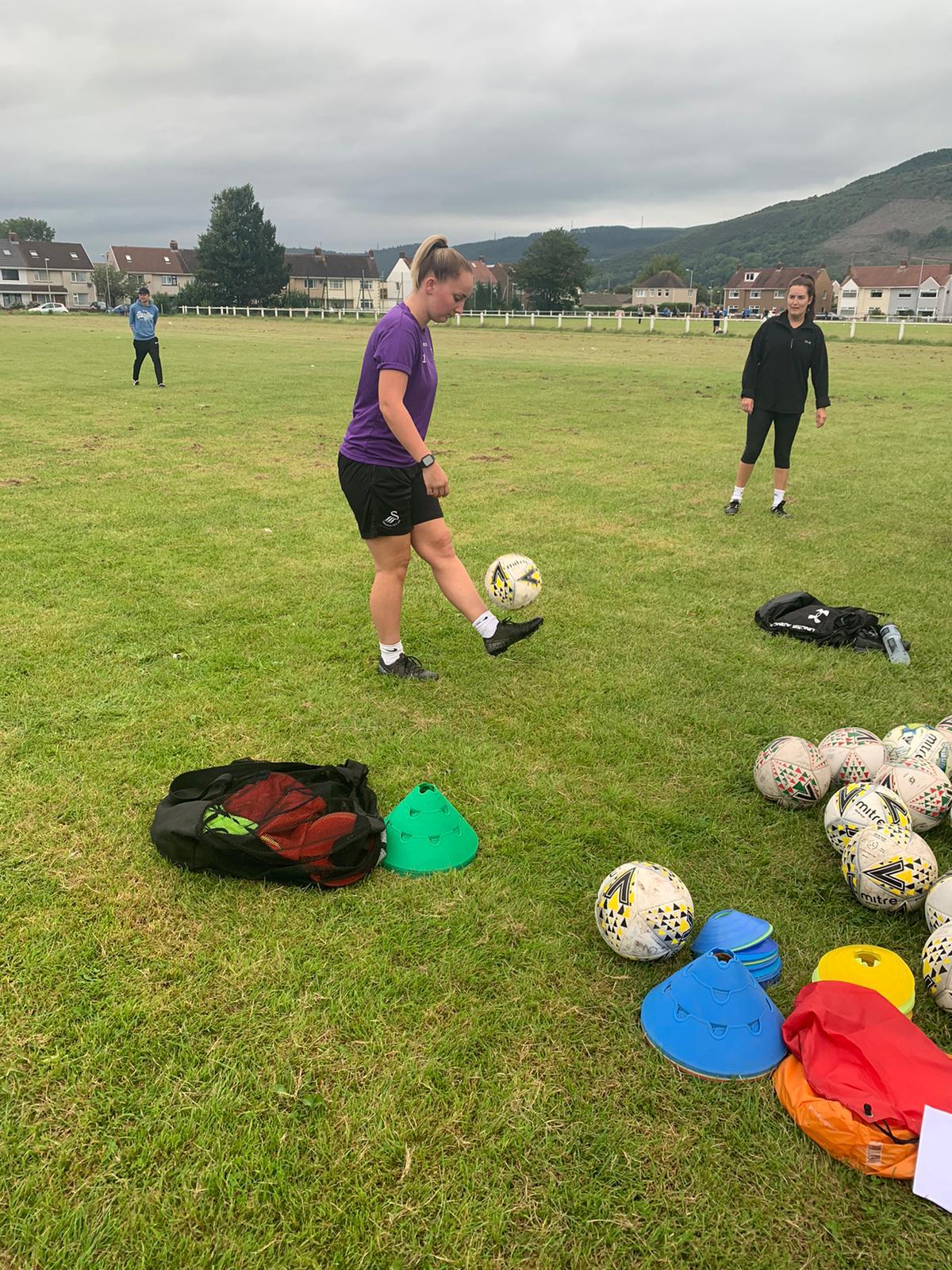 Port Talbot Ladies FC are back in training.

Port Talbot Ladies head coach Hayley Williams admits there was a fair degree of apprehension before her players went back to training this month.

After all, it had been a long time since the Welsh Premier Women’s League squad members had last got together for their twice weekly sessions.

But thanks to a grant of just over £1,000 from the Be Active Wales Fund, the players are now back on the grass – although having to get used to new conditions and demands imposed by coronavirus restrictions.

“Some of the players had hardly been out of their houses since March,” says Hayley.

“Many of them had parents with health conditions, or other relatives and they were understandably wary of spreading the virus.

“But we have been able to provide a safe environment so that they feel comfortable about coming back.”

To achieve peace of mind for her players – and ensure Port Talbot are abiding by the protocols outlined by the Football Association of Wales and determined by Welsh government guidelines – a new regime was necessary.

Not only are there still strict limits on numbers – from August 10 these were increased to 15 people in a group – but there are health and hygiene requirements such as temperature checks, hand sanitizers and the wiping and cleansing of equipment.

“The grant has meant we have been able to buy disinfectant spray, sanitizer, thermometers, aprons and masks and make sure everyone has their own individual training bib.

“We also didn’t have any storage space for our equipment. Even the footballs would be thrown in the back of a car and taken home.

“But we’re going to be able to buy a lockable cage-type unit, so that we can store our equipment within it and not have to take things into people’s houses.”

Port Talbot were fourth in the WPWL table when the season was brought to a premature end and are anxious to start plans and preparations for the 2020-21 season, even though the new fixture list has yet to be drawn up.

With no matches to target as yet, they are intent on getting back into as near as normal training mode at their temporary Vivian Park training ground.

That location is being used while their regular facility, Ysgol Bae Baglan, awaits re-opening.

When they get back on the pitch at their Victoria Road Stadium for their opening match remains to be seen, but until then Hayley is determined the players can feel fully supported.

“There has been some uncertainty about how training might work, but we are getting over that and the grant has really helped with those concerns.

“The application process was very straightforward and to know that we can afford to get things in place was a big relief.

“We are entirely self-funded as a club. We don’t have a major sponsor or a backer, we live on our own players’ contributions, so costs are always something we need to keep an eye on.

“With that peace of mind, we can now look forward to the future and to playing again.”