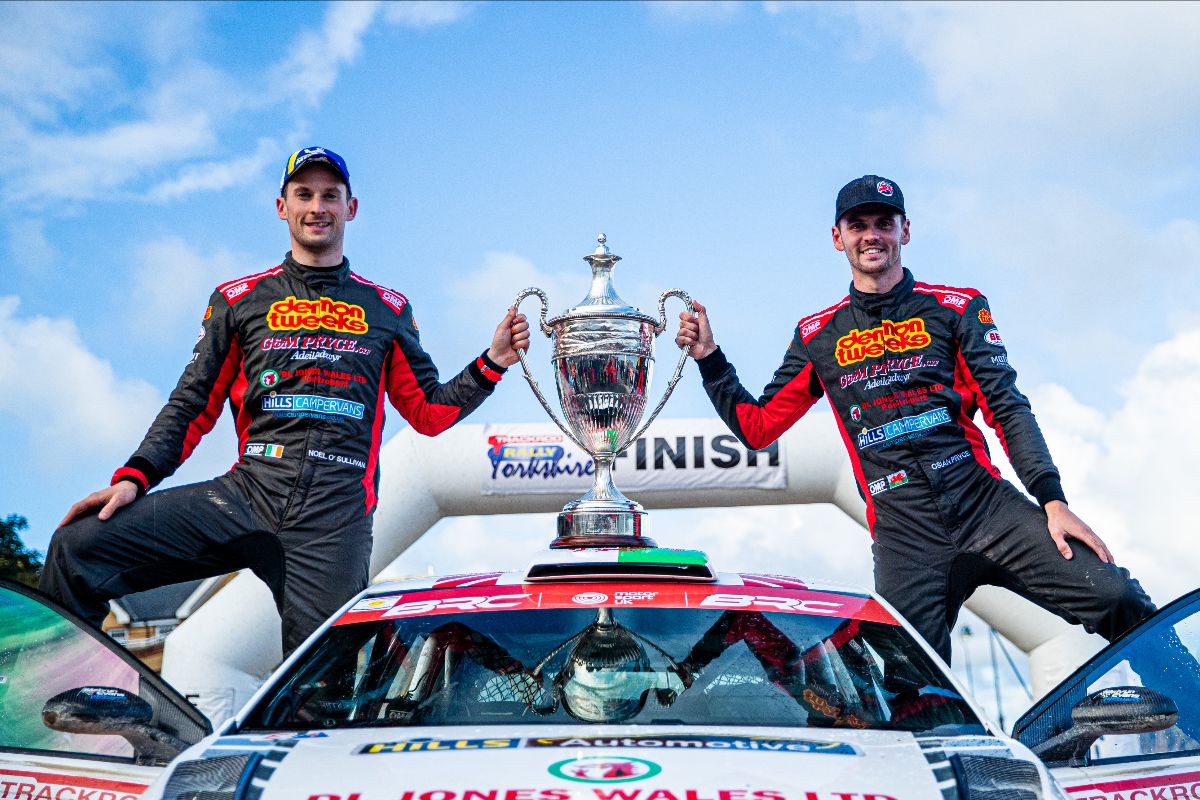 Osian Pryce finally fulfilled his dream as he was crowned Motorsport UK British Rally Champion after storming to victory at the Trackrod Rally Yorkshire.

After finishing runner-up three times in the past, the 29-year-old from Machynlleth joined a roll-call of rally legends after a flawless display with co-driver Noel O’Sullivan.

“I have always wanted to have my name on that trophy,” Pryce said after coming through the tricky stages in his Melvyn Evans Motorsport, Michelin-shod Volkswagen Polo GTi.

“It has been such a long process to make this happen and I have to say a huge thank you to everyone who has made this happen.”

“We have been patient, the hunger never faded so I’m so glad we persevered and kept at it. I’ve tried to do this for many, many years and I’ll forever be in debt for people’s generosity, kindness and support.

“I just hope this repays them because I’m very proud of them and proud of what we have achieved.”

After taking the lead in the 11-mile Dalby test under the cover of darkness on Friday night, Pryce was never headed.

Despite having the weight of a title tilt on his shoulders, he brushed it aside with aplomb, winning four of the six stages to return to the Filey seafront finish to add his name to the coveted BRC trophy, joining the likes of Colin McRae, Ari Vatanen, Stig Blomqvist and Hannu Mikkola.

Much like the five rounds before, the race for the title saw a ruthless battle between BRC regular Pryce and four-time champion Keith Cronin.

Cronin made a comeback to the British Championship tour in a quest for a record-equalling fifth title and could well have been instrumental in stopping Pryce’s charge at the weekend.

But an overshoot in his Pirelli-backed Polo GTi on Friday night would set the tone for the remainder of the event. Despite salvaging two fastest times over the final loop, Cronin and co-driver Mikie Galvin would fall short of Pryce’s pace and could only salvage second.

Cronin’s unwavering desire for that fifth crown would need to wait another year.

Rounding out the podium was Ruari Bell and Max Freeman in their Skoda Fabia.

Pryce’s fellow Welshman James Williams and co-driver Dai Roberts were back in the older specification Hyundai i20 for the gravel of Yorkshire and would improve during the weekend to take fourth.