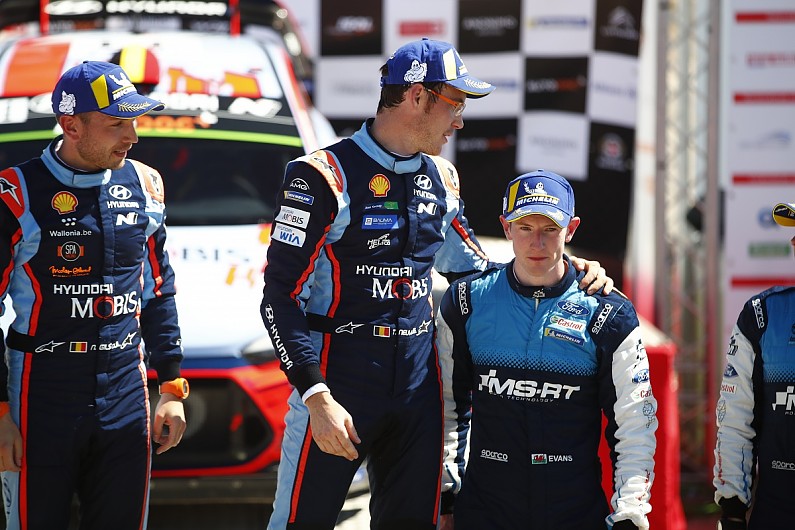 Elfyn Evans suffered World Rally Championship heartache as he missed out on victory at the Tour de Corse with a puncture on the final stage.

The Dolgellau-born river was powering to his second career win when he suffered the tyre issue on the final speed test that dropped him to third.

Evans had fought back to take the lead three times during a dramatic event, but there was no way back for the Welsh ace after the puncture.

Belgium’s Thierry Neuville took the fortunate victory only discovering he had won on his way to the podium ceremony in Calvi believing he had finished second.

“It’s difficult to accept but it’s the nature of the sport,” said M-Sport driver Evans. “I think it happened on a straight piece of road, a hole or piece of stone that had lifted.

“I felt it straightaway but tried to drive on it to see if we could minimise the time loss.

“It’s disappointing right now, but overall it’s been a really positive weekend and we know that we had the speed to win.

“The first stage this morning felt really good, and we had a good rhythm going into the Power Stage. I’m not sure exactly what happened, but it felt like we were in the middle of the road and just unfortunate to hit a stone or something in the line.”

Evans dropped 90sec limping to the finish in his Ford Fiesta, handing Neuville a victory in his Hyundai i20 that moved him nto a two-point lead in the FIA World Rally Championship.

He added: “Straight away I knew it didn’t sound good, and sure enough a couple of hundred metres later we got the puncture alarm. We had 11 kilometres to go and I knew that if we stopped to change it we would lose a lot of positions. We decided to continue, and thankfully made it to the end to salvage a podium.

“Perhaps it’s not the result we wanted, but the pace is there and I think we can all take confidence from that moving forward.

“We’ve had a pretty strong start to the season so far and I’ve been really happy with the Fiesta on all four of the opening rounds. The guys back at M-Sport are working exceptionally hard and making improvements all the time so I see no reason why we can’t continue this form into the coming events.”

Neuville had carried a 4.5sec lead into today’s final leg on Corsica’s east coast, but Evans destroyed him in the opening test, regaining 16.0sec to move into a seemingly comfortable 11.5sec advantage ahead of the final Wolf Power Stage.

“I tried to contact the team to get information, but we were unsure if we had won or not,” said Neuville. “Arriving at the podium I saw my mechanics and only then I understood we had.

“I’m really disappointed for Elfyn, who did a really good job, but we deserved it as well. It was a great battle.”

Sébastien Ogier was relieved to claim second, 40.3sec behind Neuville, after a torrid rally in his Citroen C3. Handling problems slowed the Frenchman and despite many set-up changes, he never found the pace he expected. He was 26.3sec ahead of Evans.

The last stage agony left Evans fourth in the WRC standings with 43 points – 39 points behind Neuville.

Round five takes place in Argentina on April 25-28.

FIA World Rally Championship (after round 4 of 14)