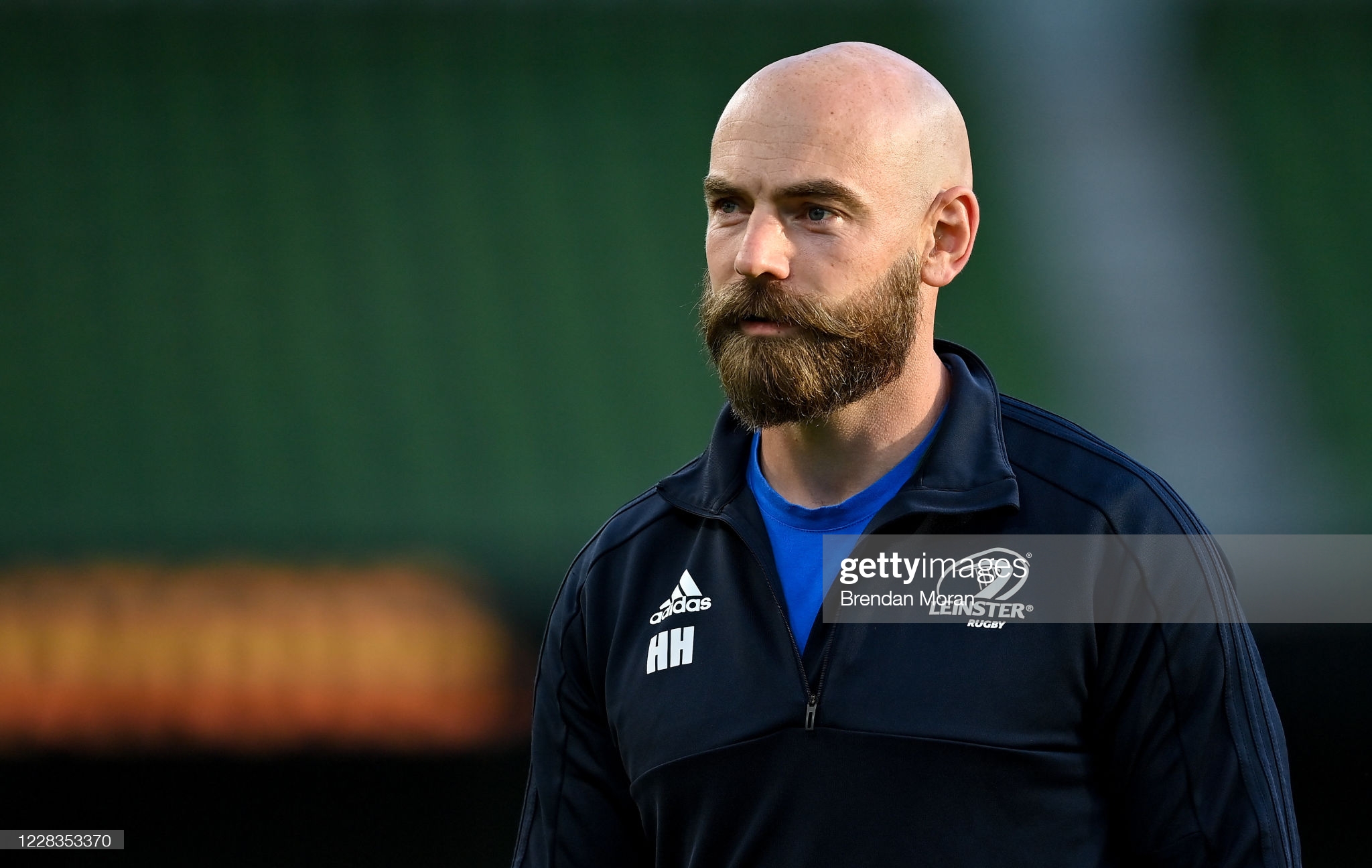 Scarlets defence coach Hugh Hogan made the move to West Wales from Leinster this summer after winning four consecutive Pro 14 titles and a Heineken Cup. But he is now looking to get one over his old team when they clash in Dublin on Saturday, as Tom Prosser reports.

Hugh Hogan admits it was difficult to leave Leinster but says the opportunity to work with Scarlets legend Dwayne Peel was too good to turn down as he aims to emulate his success with Leinster here in Wales.

“When the opportunity came up to speak to Dwayne about the job at the Scarlets, there were a lot of things that made sense,” explains defence coach Hogan, who spent eight and a half years in various coaching roles at Leinster.

“To leave Leinster may be seen as an ominous decision but there are many reasons as to why I made that decision.

“It’s really appealing to be working with a coach like Dwayne.

“He has had great experience in the game but is still on the up in terms of his coaching.

“He’s very passionate not just about the team but the region as a whole.

“I also see it as natural progression to go from working as a contact skills coach to a defence coach here now.

“Also, the vision Dwayne has for the defence is really exciting.

“I’ve seen a lot of the Scarlets over the past few seasons and have enjoyed some real battles with them whilst at Leinster.”

Hogan enjoyed a relentless amount of success with Leinster – who host the Scarlets at the RDS Arena in a game that is live on S4C – and says the major factor behind it has been the attitude of the players.

“The culture and drive a team has for success is crucial,” stresses Hogan, who played as a flanker for Leinster A between 2005 and 2009.

“Quality Coaching is important but the hunger of the players to take it upon themselves to challenge each other to improve is a big part of it.

“Also, building a squad where there is a huge number of players pushing for selection is another thing that Leinster do well.

“There is a battle to win a starting jersey every single week and that always made selection difficult for us coaches.

“Our ambition at the Scarlets is to further build on the depth that is already here.

“There’s a good foundation and there are many players who have the drive needed to win trophies again but we need to add many more strings to our bow.

Hogan believes the progression of young players is a key way of providing depth to a squad and is already impressed by what he’s seen of 20-year-old Sam Costelow at the Scarlets.

🚨 Here’s your Scarlets 2️⃣ 3️⃣ to face @leinsterrugby on Saturday at the RDS Arena in Dublin (KO 17:15pm)

“We want players to be fast tracked by competing in training and showing their worthy of the opportunity.

“Reputation is not important to me or Dwayne.

“We select on merit and performances in training our really important to us.

“It’s been great to see Sam play a few games for us so far this season.

“His age hasn’t been a factor in selection, it’s been how he has performed in training.

“He’s a guy that is looking to improve every week.

“It’s brilliant when you get a chance to blend different ages into a team.”

Scarlets conceded 43 points to Munster last week and Hogan has had a busy week trying to right the wrongs of that performance in readiness for a stern challenge against Leinster.

“The players were really disappointed after the game, as were we as a coaching staff.

“We need to take the learnings from the match but equally we need to factor in that it’s a six-day turnaround and we are facing a side such as Leinster in Dublin.

“We got together as a coaching group on Monday and had some good discussions about the type of messages we want to send out.

“We then sent the players attack and defence reviews ahead of training on Tuesday so they all have a good understanding of what we were going to talk about.

“We then had some healthy discussions as a group about what went wrong but we soon turned the page to fully focus on the challenge ahead of us.

“We are in a phase at the moment where some of our key principles are a little bit inconsistent.

“I can see a growth in what we’ve tried to get across during pre-season.

“But we aren’t the finished article yet.”