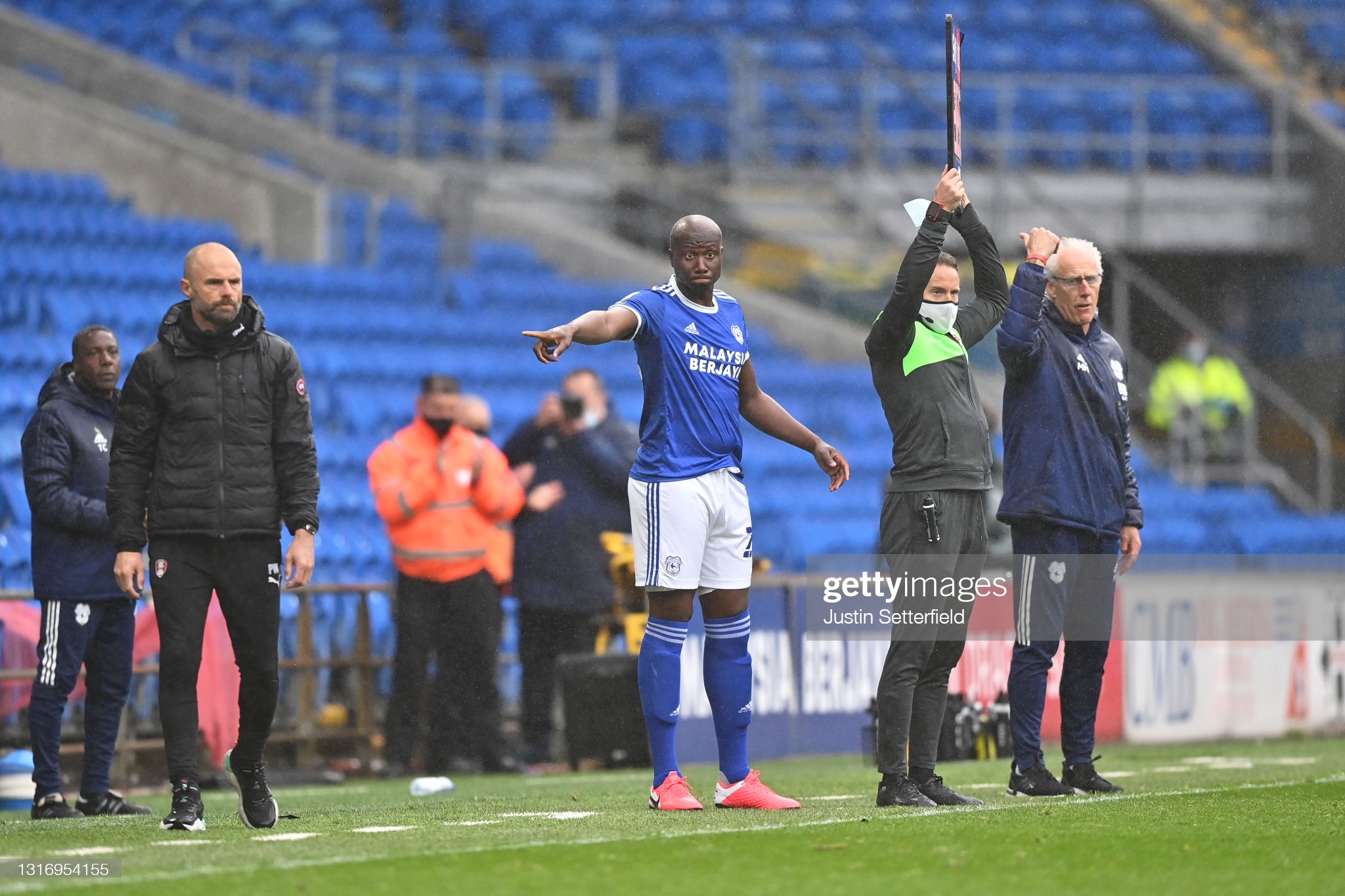 Sol Bamba returns for Cardiff City on the final day of the season. Pic: Getty Images.

The fans are coming back to football, but for some it’s too late to say a proper goodbye. Fraser Watson reflects on a year of echoing stadia and says the real stars of the game cannot come back quickly enough.

The game was essentially over, Rotherham’s fate all but sealed, but the most poignant moment was yet to come.

A mere four months after undergoing chemotherapy for Non-Hodgkin Lymphoma, Sol Bamba entered the fray as a late substitute for Josh Murphy.

In what was already a stellar Cardiff City career, the magnitude of Bamba’s 118th appearance eclipsed any of the 117 that proceeded it.

It was a moment that deserved more – a roar, a standing ovation, an outpour of emotion from those present, the rarity of tribalism being momentarily dismissed as both sets of fans united to applaud the same cause.

Instead, the warmth afforded to Bamba was confined within a restricted bubble of players, coaches, officials, and journalists.

If ever an occasion craved fans in a stadium, it was this one.

Such missed opportunity make it all more the welcome that this soulless and stripped down notion of sport is soon to be at an end.

May 17th will signal the return of supporters in sporting stadiums – a move that comes in time for Swansea City and Newport County and their respective play-off games.

It’s a development that could yet have Welsh fans trapesing across Europe come June, albeit with multiple complications.

The Cymru Premier it seems, somewhat unjustly, will be made to wait longer. Quite why, is not very clear, although their lack of stewarding may be an issue.

But cautious optimism reigns that by the start of the 2021/22 campaign, attendances at all levels of the game will resemble normal. Whatever that word means in this day and age.

This past year football has found a way to motion forward despite adversity, but it has done so without a beating heart.

Games have been bereft of atmosphere and exhilaration. Passion has transcribed into social media nonsense.

Resounding choruses of ‘you don’t know what you’re doing’ have given way to echoed screams at referees. Vociferous crowd celebrations have been replaced by increased volumes on tannoys.

At first, some clubs tried to blast out their own taped crowd effects, but the humming of humanity that bore no relevance to what was actually happening was soon dropped – even if the inane idea was continued by BBC radio producers.

Putting aside the opinions of 12 greedy club owners, the one thing these strange times have taught us is that whilst the game is capable of continuing without fans, it needs them immeasurably.

In the meantime the theories have run wild. Games with goal-fests, teams under-performing, dour tactics, lack of motivation, the absence of urgency over VAR decisions – all have in some way been attributed to the absence of excitable men and women voicing their joy or displeasure.

But in truth, the above concepts have amounted to guesswork as pundits have scrambled to make meaning of circumstances.

Obvious revenue losses aside, we are still collectively scratching our heads as to the true side effects of behind closed-doors football. And it’s not a project that anyone desires to be prolonged.

What we do know is the chance to share moments of glory have been missed.

Career defining moments have been played out to little acclaim. Teams performing without intensity have avoided jeering and rollockings.

And emotional goodbyes – and it is likely both Junior Hoilett and Harry Wilson would have also been afforded some recognition at Cardiff last Saturday – have been reduced to handshakes and hugs between teammates.

But above all, it’s robbed footballers the chance to connect with the very people that fuel their careers – in a way that can’t be done on Twitter, anyhow.

Bamba’s story is one that football fans can embrace whilst at the same time, recognising the elements outweigh the importance of any on-field result.

His introduction on Saturday would have prompted the kind of heartfelt outpouring that humanises professional footballers, that would have reminded us for all the nonsensical diatribe and baiting that derives from stands, few things in sport carry greater meaning than a player’s relationship with those who watch in real life.

Bamba deserved that moment. With a year still to run on his contract, the send-off he merits may yet come in South Wales, although sentiment rarely dictates the course of events in professional sport.

But stories like his encapsulate the absence of supporters, and just why football needs them back, more than any other.

It’s 40 years to the day since Bob Marley died.

His song Three Little Birds became Ajax’s anthem. Here’s the story of how the fans adopted it ❌❌❌

Bring back the broken pledges not to pay for tickets until manager X is sacked.

Bring back the hostility and the refusal to adhere to pleas from stewards to sit down. And bring back the connection between clubs, players, and supporters, which can bring unquantified amounts of joy and despair in equal measure.

And bring back those rare, touching moments of warmth and admiration that have been denied to heroes like Bamba.