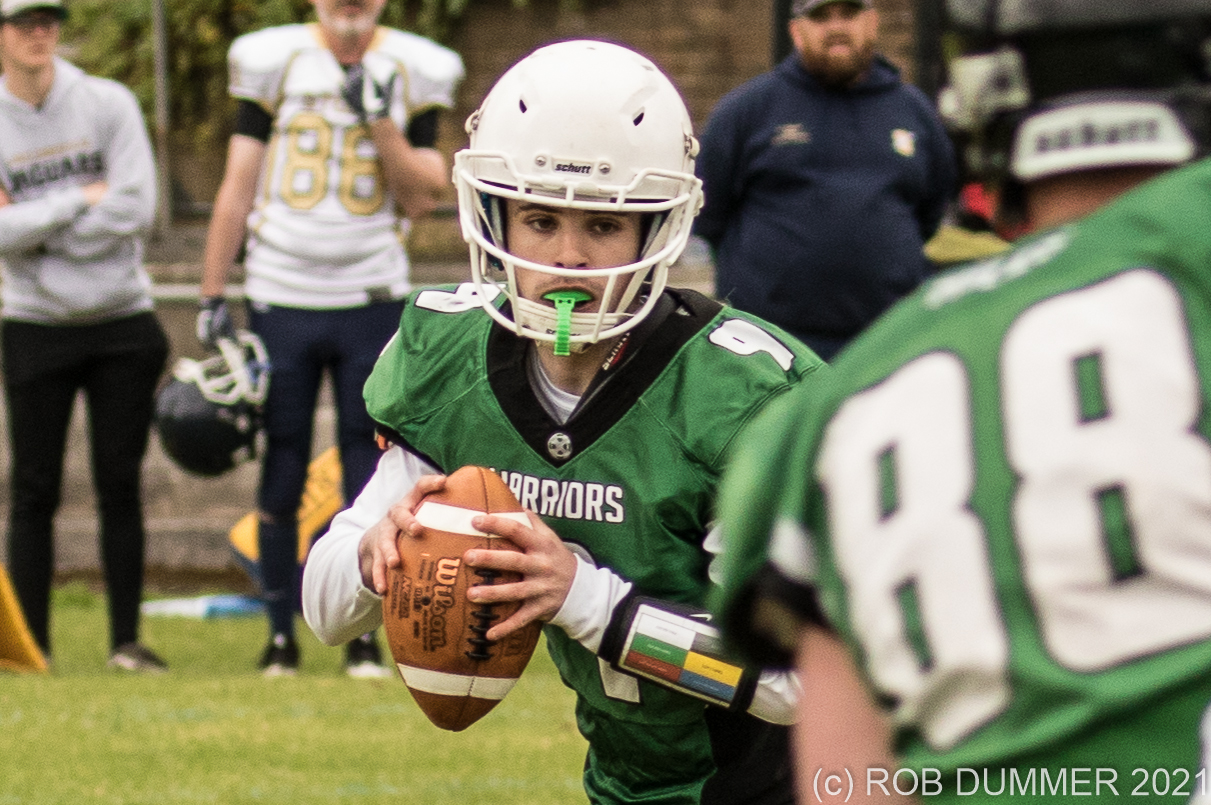 American football is the latest sport to have returned to action in Wales. Owen Bevan went to Llanharan to catch up with the South Wales Warriors.

When their 2019 British American Football campaign finished, the South Wales Warriors were already planning for 2020 as the club’s comeback season.

They had sealed a perfect season with the Division Two (South) championship on the final weekend of August 2019 and were set to start their climb back towards the Premiership having also secured their place in Division One of the British American Football Association National League.

The club’s rebuilding efforts were finally being rewarded but its much anticipated 2020 season would never materialise. Like so much sport below the professional level, British American Football had remained in, seemingly indefinite, suspension since March 2020.

“It’s just great to back playing,” is how Warriors head coach Dean Jackson described the team’s return to action.

Rather than compete in the usual league and division format clubs are playing a schedule of eight games against geographic rivals, regardless of their usual standing, with no post-season.

That was to have seen the Warriors host league newcomers the Hereford Stampede on Sunday, August 22 with the debutants having already fallen to heavy defeats against the Birmingham Bulls and Swindon Storm in what has been named the Severn division that’s lead by the Warriors former Premiership rivals the Bristol Aztecs who have yet to lose.

Sunday would have been the Warriors second home game after an unspectacular and hard-fought 12-0 victory over the lackluster Swindon Storm in what their first fixture at their home at Llanharan Rugby Club’s Dairy Field since the August, 2019 semi-final victory.

But in an indication of the variety of difficulties so far this season, the Stampede have had to postpone the fixture.

The Swindon games was a return to winning ways after the Warriors had fallen to an 18-14 defeat the previous weekend away to former British powerhouses the Birmingham Bulls who many suspect are a better team than their lowly Division Two status.

The Warriors had opened their season in July with a convincing 28-0 victory at the Worcestershire Black Knights but in an indication of some of the difficulties facing teams returning to a full contact sport after what, for some clubs, has been a two-year period of inactivity injuries had forced the hosts to concede in the third quarter.

“It’s not as much about dominating teams as we haven’t been able to train and we just want to get everyone back playing. The defence hasn’t missed a beat but there’s been a massive turnaround on offence and although we played well in sparks we lacked consistency,” said Jackson of Sunday’s victory by his own injury plagued side.

Part of the turnaround has been the installation of Matt Morris, in his second season with the club, and rookie Ash Lewis at the quarterback position.

Both lead touchdown drives on Sunday as they seek to take over the leadership of the offence from Jackson who, in the 2019 championship game had been named the Most Valuable Player in the 13-0 victory over the Bournemouth Bobcats.

Though Jackson intended to play the 2020 season, and hasn’t officially retired from playing, he agreed to take on the head coach role in December 2020 when club stalwart Geraint Roberts stepped down after four years guiding the club.

“I don’t feel I could kit up and do the sideline stuff and my focus is coaching the guys at training and I didn’t want the team to not have a coach,” said Jackson of his sacrifice for the greater good of the club which like any amateur sports team has been hit hard by the pandemic which had shut down social activity for so long.

At the time of his appointment the team was still unable to meet, yet alone train, in person and the pandemic and its knock on effects on employment and people’s personal security is still being felt by the Warriors.

The change in routine may also have led to some reassessing their social activity, said Jackson.

“It was hard being away from football for so long and I think a lot of people, after a year off, have realised the toll it takes on your body and that it’s time to stop.

“I think a lot of the boys decided they didn’t want to be in position of putting themselves at risk, with Covid, especially the older players and they’ve had that opportunity to step away and they may think it’s time to end their playing days. But hopefully we’ll get another year out of some of them when they see how much they are missing football and they may come back for one last hurrah.”

Ahead of our first game tomorrow @WBKFootballUK please see the fixture list for the South Wales Warriors 2021 season. pic.twitter.com/nIwx1WStlL

The Warriors have games scheduled until the first week of October, when the season usually finishes in August or no later than the first weekend of September, and from December plan to return to running open recruitment days.

Lockdown had meant the club’s usual recruitment days couldn’t go ahead this January, as normal, with the club only able to return to training in May. It also followed the Welsh Rugby Union’s return to play guidance, which ruled out scrummaging until July, which meant the essential close contact training for the offensive and defensive lines could only begin last month.

Though the club is still accepting new players, and in the long off season had concentrated on recruiting players such as Lewis who have had experience playing non-contact flag football, or for the Swansea and Cardiff university sides, its inability to hold its usual recruitment drives have proved tough.

“They are massively important as if you don’t have those sessions you don’t really have the time to get everyone up to speed,” said Jackson who also described off season recruitment as vital in supplying new players.

For now the Warriors are just pleased to be back playing and with the opportunity to plan for the future.

The Warriors play their home games at Llanharan RFC and kick-offs are 2pm.