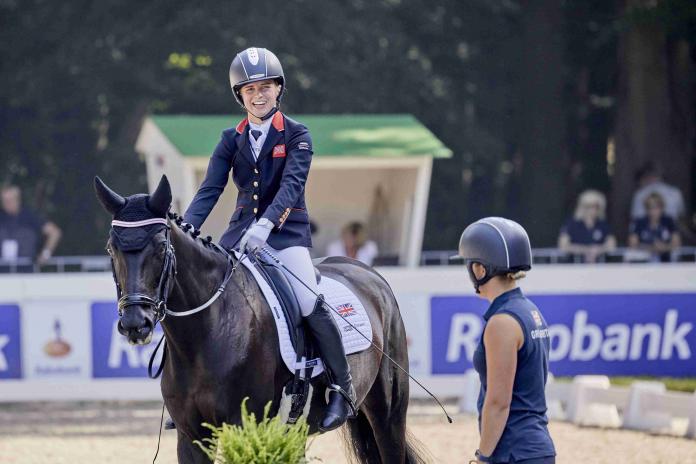 Wales’ Georgia Wilson is dreaming of winning a medal at the Tokyo 2020 Paralympic Games after receiving a late call-up into the Great Britain team.

The 25-year-old has replaced eight-time Paralympic dressage champion Sophie Christiansen, who had to withdraw when her ride, Innuendo III, suffered a veterinary issue.

“It’s all happened so quickly but I’m really excited to go to the Paras,” said Wilson, who had her sights set more on Paris 2024.

“The horses have to quarantine 10 days before they fly so we were at the quarantine when I found out a few days ago. It has not been very long.

“I was on stand-by as first reserve, but I wasn’t expecting a call-up.

“But with horses anything can happen, they can roll over and knock themselves and get hurt.

“It’s a bit of a sad situation taking Sophie’s spot but that’s horses for you. There is nothing you can do. They have all got their own little mind.

“I have always dreamed about going to the Paralympics ever since I was a tiny girl.

“To go now is making that dream come true. It’s a long flight to Tokyo – the longest flight I’ve ever taken.”

Wilson proved her international ability by winning gold and two silvers at the European championships in 2019 on her old horse, Midnight, which was injured at the final selection trials for the Paralympics.

Now she will be riding seven-year-old Suki and joining a hugely successful British team that includes her hero Sophie Wells.

“Sophie coaches me and helps me with everything,” added Wilson, who is based in Abergele, Denbighshire.

“It’s really great to be on the team with her to go and make memories like we did at the Europeans.

“The Europeans were my first big championship but this is going to be an even bigger experience. This is the biggest event you can ever achieve.

“I’ve had Suki less than a year. We were aiming for Paris but now she is going to Tokyo.

Her third medal of the week and first gold for Great Britain at the European para-dressage Championships!

What a day for Georgia Wilson in Rotterdam 🥇

“Hopefully we can get a medal. That’s what I’m aiming for but I’ve not been with Suki for very long so I’m not putting pressure on myself.

“I trust her completely and know everything about her and hopefully it will all come right in the arena.

“I’ve been riding since I was two years old. My mum and dad were into horses and were told it was a way for me of doing my physio (for cerebral palsy).

“I wasn’t very good at physio when I was younger, I hated it. But I fell in love with the horses straight away. I’d be very bored if I had no horses.”

Wilson will have to miss the Opening Ceremony on August 24, with the first inspection of the horses taking place at the Equestrian Park the following morning.

“We’re all going to put on our Opening Ceremony kit and watch the ceremony on television,” she added.