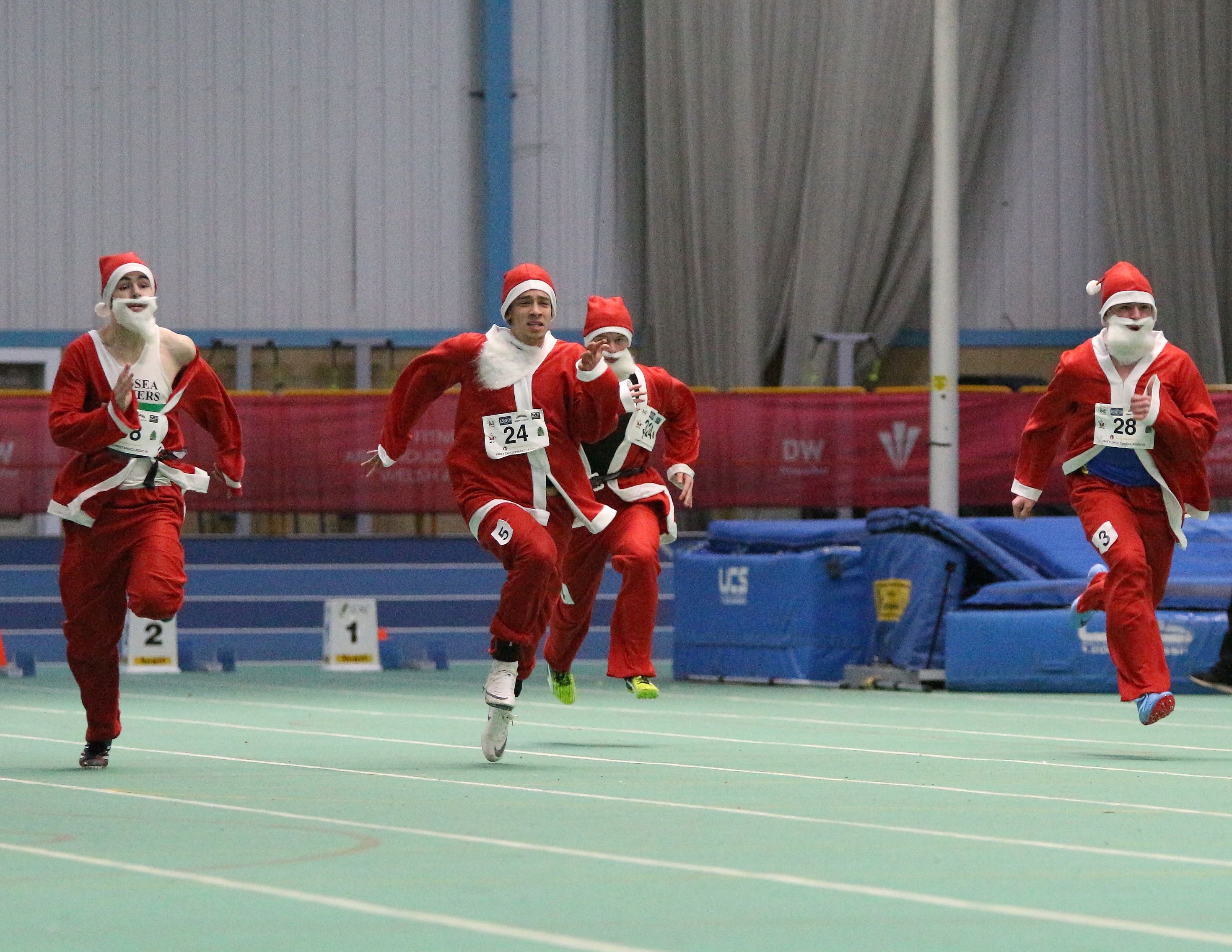 A sackful of outstanding performances were delivered at this year’s Cardiff Metropolitan University Christmas Classic.
The traditional annual curtain raiser to the Welsh indoor season saw a number of personal bests and thrilling competitions against a backdrop of Christmas tunes and officials in festive fancy dress.

Perhaps the performance of the day was Owain Lloyd-Hughes’ blistering personal best in the 60m.

WATCH the sensational Santa Sprinters make a dash in the @Met_athletics Christmas Classic…it’s a busy time of year for Santa but they had 7 seconds spare for the big race in NIAC.

Here’s our man @RhodWills track-side with this gift-wrapped report. https://t.co/jL3XlcYHPi

The Neath Harrier shattered his previous best of 7.04 when he clocked 6.76 in the heats on Sunday – making him the third fastest Welshman indoors this year behind Jeremiah Azu and Kristian Jones.

Lloyd Hughes went on to win the final in fine style, albeit in a slightly slower time and, like all the day’s victorious athletes, enjoyed his pick of the presents from underneath the Christmas tree at Cardiff National Indoor Athletics Centre.

The youngster said afterwards: “I’m really happy. I smashed my PB. I wasn’t expecting anywhere near that time. Last year I was running about seven seconds dead and this year I’ve taken 0.3 off of that so it’s really, really good.

“Usually this time of year you are just starting 60m. This was the first competition for me and you really shouldn’t be running times like that, but it’s progress so I am really happy.

“Sixty has always been my weakness so to run like that now is the icing on the cake.

Looking ahead to 2020, Lloyd Hughes, who has enjoyed a breakthrough year, said: “I haven’t really thought about goals for the coming year really, PBs, that’s all I can say, I want PBs in all three events – 60, 100 and 200.

“I’ll be trying to aim for the British Championships again, just see what I can get into. I’m still young, it’s my last year at under-20s. So I’m just going to aim for everything that I can.”

The performance was enough to bring Lloyd-Hughes the Zip Travel male athlete of the meeting award.

But on Sunday, multiple British champion Davies, redressed the balance as she led from the start to clock an impressive time of 12:49.33. The fast pace also pulled Lewis through to an indoor 3K PB of 12:55.36.

Both women will hope to go head to head for the gold medal at the British Indoor Athletics Championships in Glasgow in the New Year.

There were a number of personal best performances throughout the day, including during an exciting men’s pole vault competition which saw Swansea University’s Ieuan Hosgood register a new best of 4.41m.

Fellow Swansea athlete, Steffan Jones also clocked a personal best to win the 300m. The Swansea Harrier clocked an impressive time of 36.02, while another of the city’s sprinters, Gabrielle Fakande clocked a PB of 7.87 in winning the women’s 60m.

Cardiff Archer Daniel Murathodzic registered a lifetime’s best of 8.37 in winning the men’s 60m hurdles and Cardiff Athletics’ Lauren Evans matched the feat in the women’s hurdles registering a PB of 8.74.

One of the showpiece events of the day was the men’s 3,000m which featured a line-up including Cardiff Met’s European Under-23 Championship silver medallist Piers Copeland, who was defending his title against the likes of World Championships steeplechaser Ieuan Thomas, of Cardiff Athletics.

And it was Copeland who came out on top once again, winning in a time of 8:01.87 from top quality Leeds pairing Phil Sesemann and Ossama Meslek. Cardiff Met’s Jake Smith, who led for much of the race, was fourth in 8:06.11.

Cardiff’s Lucy Marland was the fastest woman home in the mixed 3,000m heats in a time of 9:43.69, ahead of Parc Bryn Bach’s Lauren Cooper and Amman Valley Harrier Jade Williams.

In the field events, Welsh Commonwealth Games long jumper Rebecca Chapman made a successful return to indoor competition following a gap of three years by winning the women’s competition with a leap of 5.89m.

There was an impressive performance in the men’s shot put where F44 athlete Harrison Walsh took the honours with a distance of 15.22m, which bodes well for the coming season during which he has ambitions to compete at the European Para Championships and the Tokyo Paralympics.

The traditional Santa Sprint saw Plymouth’s Aaron Miller ‘Blitzen’ the field to take home a sackful of presents from under the tree in a time of 7.49, pretty impressive stuff as all the athletes were clad in a full Santa suit and beard.