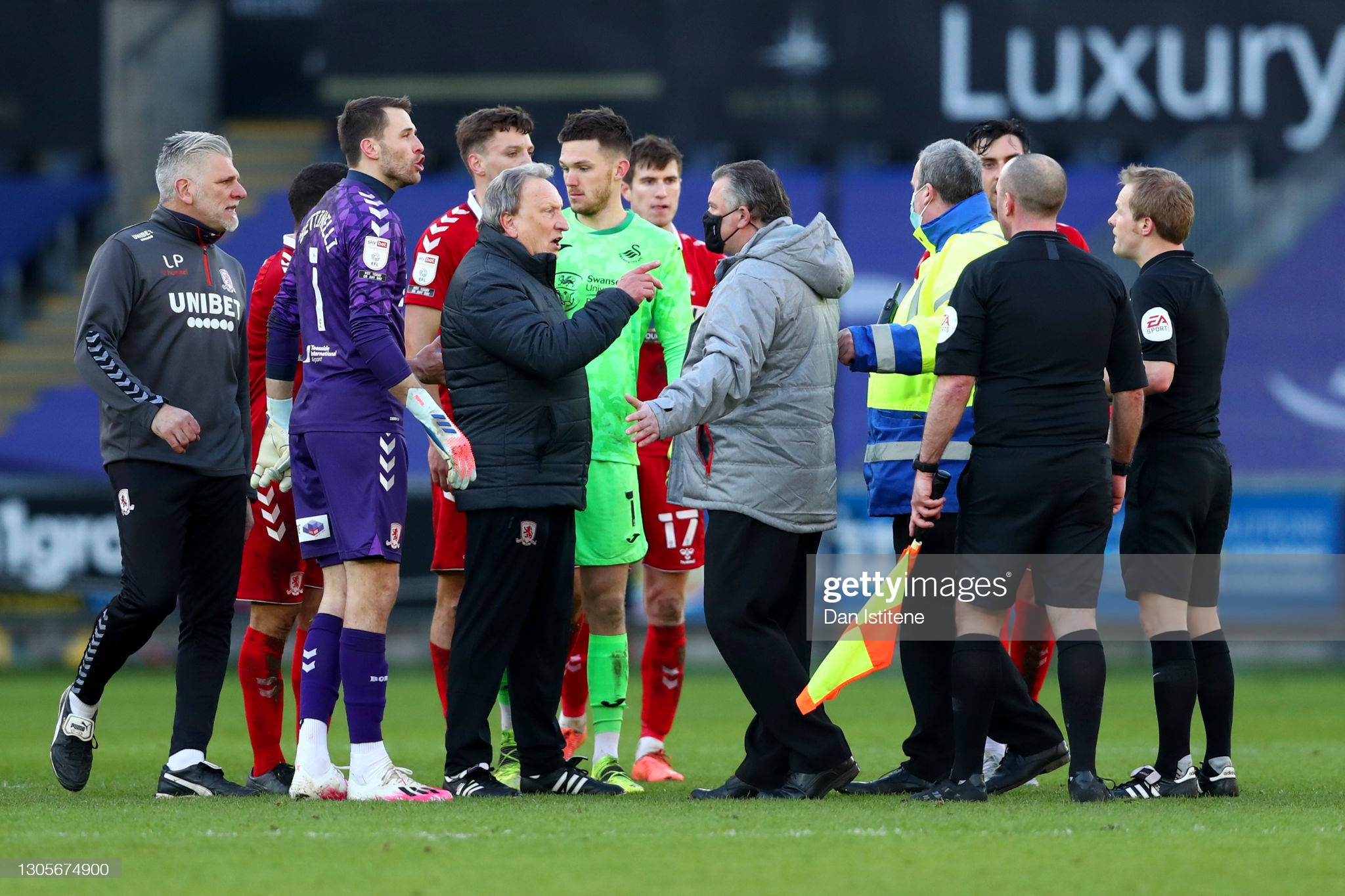 Steve Cooper has insisted he works for a “classy club” after refusing to get involved in a war of words with Neil Warnock.

The clash between the pair happened both during and after Swansea City’s controversial 2-1 victory over Middlesbrough at the Liberty Stadium.

Warnock could be heard referencing Cooper’s father Keith during one of several rants during the game in which Boro conceded a 97th minute penalty and also had a goal ruled out for a foul.

After the game, the angry former Cardiff City manager then made a comment that Swansea are benefiting from controversial refereeing decisions because head coach Cooper’s father Keith was a former top flight official.

Warnock’s side were beaten after Andre Ayew converted the penalty in the seventh minute of stoppage time – the second time in four days that they have scored a late spot-kick to win.

“All I care about is ourselves. I will only give comments on ourselves. I’m not getting involved in tittle-tattle,” said Cooper.

“I am not interested in other clubs, I never have been. I just make sure we keep our values and our class to what the community and the club deserve.”

Warnock had made his claims in TV interviews but then seemed to backtrack in his press conference and claim he was only joking.

“The penalty at Stoke the other night was scandalous,” Warnock said.

“They must be laughing their heads off at the minute but what goes around comes around. I’m sure we’ll see Swansea (in the Championship) next year.

“They can’t keep having that much luck with penalties. I don’t know if it’s Cooper’s dad who’s influencing this.

“He must have all the numbers. It’s the only thing I can think of but, joking apart, they can’t keep having decisions like that.”

Warnock predicted he would receive another apology from referees’ boss Alan Wiley after Boro’s play-off hopes were dented.

Boro were denied a point – Sam Morsy had stuck at the start of injury time to cancel out Ayew’s first effort after 40 minutes – when referee Gavin Ward, having initially pointed for a corner, awarded Swansea a penalty.

The visitors were also denied what appeared a legitimate goal at the start of the second half when, with Swansea leading 1-0, Marc Bola’s long-range effort was disallowed.

“I’m sure I’ll get an apology now from Alan Wiley (referee director at Professional Game Match Officials Limited) as I’ve had three or four in the last six weeks,” Middlesbrough manager Warnock said.

“I’ve had that many apologies I don’t know what to do with them.

“There were three things. (Ryan) Manning takes (Anfernee) Dijksteel out and not one of the officials see it. It’s a serious offence and he’s comes off injured, no booking and that’s wrong.

“With the goal he thought it was a free-kick to them, he hadn’t see (Yannick) Bolasie won the ball. It’s either a penalty or a goal.

“I’m a little bit bewildered about the penalty. He pointed for a corner kick, but he assures me that when he thought about it that George didn’t get any of the ball and it was a penalty.

“I asked ‘why did you point to the corner flag? Were you guessing?’. But that’s what he said.”

Swansea’s win took them above Brentford, who did not play, and into third place in the Sky Bet Championship – one point behind Watford with two games in hand.

“We have had a couple of penalties now, haven’t we?” Cooper said on having penalties in three consecutive games after going 25 league games without one.

“It’s a little bit ironic the timing of it, but I would be so disappointed if our players were making challenges like that at pivotal times in the game.

“Both decisions in both games I think were clear penalties and we have got Andre to put them away. It’s not rub of the green, it’s about spirit and hard work.”