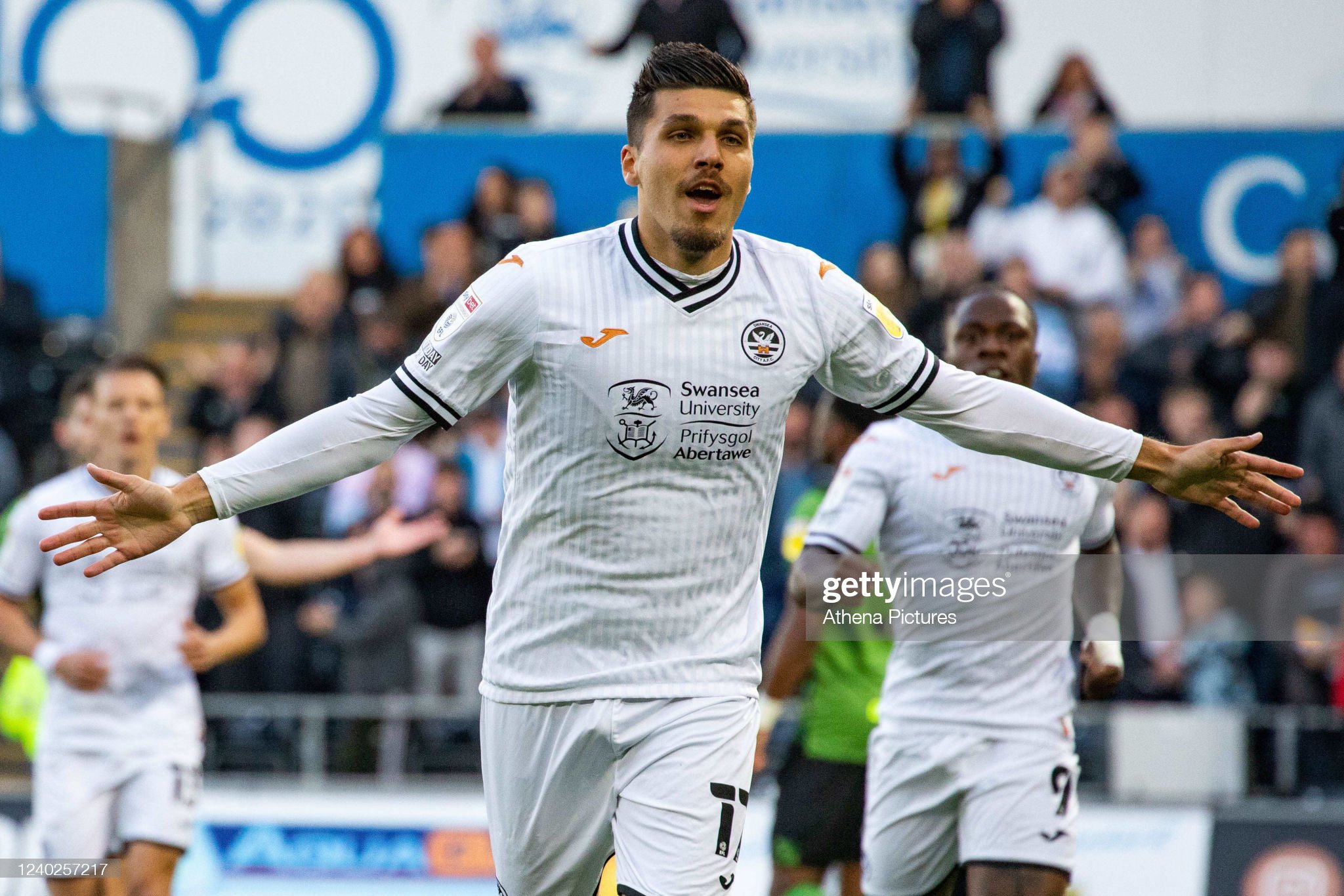 Swansea City and Cardiff City will both end their seasons on a wing and a prayer on Saturday afternoon.

Both have suffered battle damage after a long season and neither can do anything other than pray their wishes come true this summer.

For the Swans, that will mean hoping against hope they can retain some of their best players.

For the Bluebirds, it’s case of wondering if miracle arrivals, such as Gareth Bale or Aaron Ramsey, might be anything more than pure fantasy.

Swansea’s top scorer Joel Piroe looks set to move on this summer as the club seeks to plug the gaping holes in its finances.

Swans boss Russell Martin has resigned himself to the fact he will lose some of his top talent just as he has moulded the team into shape.

Leeds United and Leicester City have already expressed interest in Dutch star Piroe, who will be looking to add to his 24 goals this season in the home clash with QPR today, and fans fear that Flynn Downes, Ben Cabango and Michael Obafemi could also leave.

“The club has to find a way to be sustainable. A club at this level and this size, with everything we have, needs to be supported by someone who wants to put their own money in,” said Martin.

“It also causes a huge amount of problems when a person decides they no longer want to put money in. We were aware of that when we were brought in.

“It’s probably the reason we were brought in, to improve players. We’re well aware of that, every club outside the top four in the Premier League is a selling club.

“The ideal scenario is we don’t need to sell anyone and we can keep growing together, But you’ve seen it in the accounts, we’ll have to sell someone, or a number of people, to get to the financial figure the owners want.”

Steve Morison is confident he will have some new signings to announce when the transfer window opens next month and would love to see Bale join in his cultural and technical revolution at Cardiff City.

The Bluebirds boss admits to would be an “absolute no-brainer” to sign Bale when he leaves Real Madrid in the summer, but insists the Welsh skipper would have to make the first move.

“I’m not going to go and get Gareth Bale’s number and ring him and say, ‘Oh, by the way, do you want to come and join Cardiff?” said Morison.

“It would be great if he joined us, an absolute no-brainer from our point of view and a great boost for everybody. But if it did happen, he would have to come and be part of the change.

“He would have to come and fit in and buy into it what we are looking to do here. I’m sure if anything like that was going to happen then me and him would have a chat because there would be a lot to talk about.”

Talks about a possible Bale signing for his home town club have been sparked by him needing to find somewhere to play when he leaves Madrid in order to stay fit for Wales if they make the World Cup finals.

Wales will meet either Scotland or Ukraine at Cardiff City Stadium on 5 June to determine which team goes to Qatar later in the year.

At 32, Bale is closing in on retirement, although there are bound to be a swathe of offers coming his way from all around the world when he leaves the Spanish capital.

Morison wouldn’t be able to afford the sort of wages Bale is used to, especially after the board have given him a tight budget, and there would need to be a special arrangement between the club and player if anything was to come off.

“Nothing is sorted on transfers as yet, but we are doing really good work. We have deals that are done but we can’t do anything with them until the window opens next month,” he added.

“I’ve said from day dot, if it’s about money then we are not the place for you. We are still paying very good money for a job people love doing.

“It’s fresh, there’s a new culture, new environment and, even the training ground is better. We have an extra training pitch so there are no excuses every day – it’s something exciting to be a part of.”

A win at relegated Derby County in today’s final match of the season would help Morison sell his vision to any new singings, Bale included.