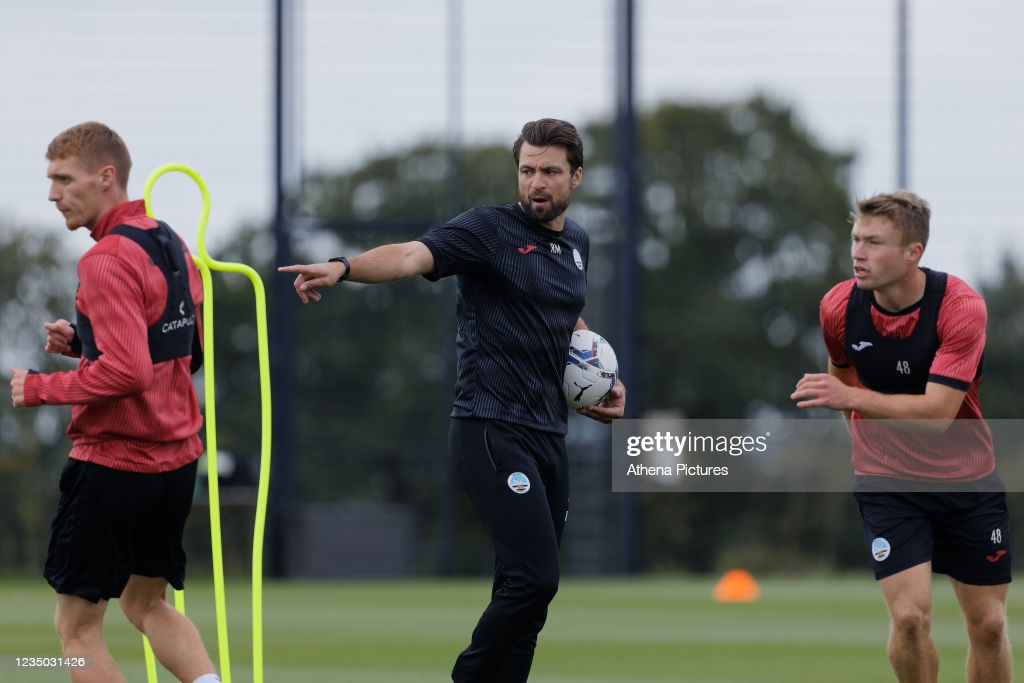 Russell Martin insists Swansea City’s players are responding to his new regime – on and off the training field.

The Swans head coach believes the 12-day break during the international window has enabled him to firmly establish the new methods that were hurriedly brought on board when he was appointed on the eve of the new season.

They include making sure the players are fitter, better conditioned, and more open to “honest conversations” in more regular meetings.

From what he has seen over the past week-and-a-half without a match, Martin has revised his starting line-up.

The Swans host Hull City on Saturday, still stuck in 20th place in the Championship table and with a modest return of just one victory in five league matches.

“Everything is built around one thing, and that’s intensity,” said Martin, who left MK Dons to replace Steve Cooper just days before the season kicked off.

“We stood back on Wednesday whilst watching training and I thought ‘OK’, the two teams that were going at each other were finally playing some football in the way that we want them to play.

“There are different levels of fitness. Of course, the guys are all fit and professional and I keep stressing it’s not a slight on anyone who was here before. But they played in a completely different way last year.

“If you look at the physical requirements for each position, they are hugely different to what they were asked to do and now what we require.

“It’s conditioning, rather than fitness. They are fit, but it’s the conditioning to play in a certain way, which is really different. If you spoke to the players, I’m sure they would say the same.

“That’s no disrespect to anyone who was here before. But they are not conditioned to the way we want and I think that was pretty evident in the games.

Martin says he also introduced more individual and group meetings in a bid for the players to connect more with each other and understand what is required.

Swansea City are collaborating with the @JacLewisFdn to develop a new hub in the city which aims to provide a preventative wellbeing and mental health service to the local area.

He admits not all the players have enjoyed the new way methods, but most – such as defender Ryan Manning – have welcomed the changes.

“We meet every day. The players need to understand why they are doing something and that everything we do is related to the big picture.

“We are not doing anything to waste time or just to fill time on the training pitch. Everything is important and has a purpose.

“We meet every morning, they do their pre-activation, then straight out on the training pitch and then we meet with guys after – either individually or in their units.

“There is a lot of contact time and even the guys from other clubs have not been used to as much of it. Bu they are getting used to it now and they are expecting that intensity.

“They are a brilliant group to work with and they are willing to work really hard, to train hard and we’ve been surprised by their willingness to take all this on.

“They are asking questions and talking to each other during the sessions. They are understanding what we want and they have been fantastic.

“The team I had in mind is different to the team that will start tomorrow because of the way certain guys have trained and the way they have helped others.”

“There have been a few conversations between me and the players where they have been pretty surprised by the honesty.

“But all I ever wanted in my career when I spoke to a manager was honesty. Sometimes I hated it and I totally disagreed, but at least you go away knowing where you stand.

“The majority of the guys have reacted brilliantly to that. Some guys will need further conversations to iron out the creases.

“I had a conversation very early on with Ryan Manning. It was about what I saw in him and how I felt he could improve. He’s been fantastic and really good to work with.

“We have missed him for the last 10 days and it’s a shame he’s been away. He’s been one example of someone who has responded really well to what we have asked him to do, to all the coaches and all the sports science staff.”

Saturday’s fixture will see the Swansea.com Stadium back operating at full capacity of 20,991 supporters.

It is the first time since March 2020 that a full house is possible.