The Scarlets are set to bring Corey Baldwin back to Welsh rugby with the former Wales U20 star returning to Llanelli from Exeter Chiefs. Baldwin left the Scarlets for the Gallagher Premiership last season but the centre struggled for consistent game time at Sandy Park due to the strength of the Exeter squad. Before leaving the Scarlets the Llandeilo product was seen as one of the most promising prospects in the Welsh game, with Wales coach Wayne Pivac a big admirer.

Leus du Plooy has vowed that Welsh Fire will re-ignite their campaign quickly on Monday after suffering their first defeat in The Hundred. The South African smashed a blazing 22-ball 43 which featured four sixes in what was ultimately a losing effort for Fire at home to Manchester Originals. A win on Saturday would have moved Fire up to first place in the table and well on their way to qualifying for the knockout stages of the tournament. Now, they must ensure winning momentum is not reversed when they meet Oval Invincilbes in south London on Monday.

Warren Gatland has told his British and Irish Lions to prepare for a "cup final" after their 27-9 defeat by South Africa in the second Test set up a series decider next Saturday. The Lions entered half-time at Cape Town Stadium 9-6 ahead through three Dan Biggar penalties but the match then turned on its head, with the world champions taking control up-front and in the air. Makazole Mapimpi and Lukhanyo Am crossed in the third quarter while the boot of Handre Pollard did the rest, setting up a winner-takes-all scenario in the climax to the tour next week.

Dan Jervis finished fifth in his first Olympic final as Great Britain ended their most successful swimming campaign in Games history. Swansea swimmer Jervis dug in for a gritty performance that ended with him finishing outside the medals, with a time of 14:55.48 that was some way short of his personal best as well as the 14:48.67 that earned him a silver medal at the Commonwealth Games in 2018. But the 25-year-old Swim Wales athlete from Resolven should feel proud and encouraged by placing so near to medals at his maiden Olympic Games.

Alun Wyn Jones has refused to get drawn on Rassie Erasmus' criticism of the refereeing in the first Test and warned the Springboks there is more to come from the Lions. The Lions captain was responding after Rassie Erasmus, the South Africa director of rugby, released an unorthodox 62-minute video on social media in which he criticised the officials following the Springboks' 22-17 loss in the first Test in Cape Town last Saturday. Erasmus claimed Springboks captain Siya Kolisi did not receive the respect from officials afforded to the Lions skipper and said he was willing to walk away from the remainder of the series if he was out of line.

Lauren Price insists she holds no fears about facing old foe Nouchka Fontijn in a shoot-out for an Olympic final. The Welsh boxer has her sights set on a gold medal after guaranteeing herself at least a bronze for Great Britain with a quarter-final victory in Tokyo. Price, the world champion from Ystrad Mynach, will face Fontijn in the semi-finals after beating Panama's Atheyna Bylon, 5-0, on Saturday.

The Hundred May Have 99 Problems . . . But The Cricket Ain't One

Welsh Fire are blazing. The men’s team have played twice and won twice and sit second of the eight teams in the early table. It’s not quite ignited yet for Welsh Fire women, who have lost both opening fixtures, but approval ratings for The Hundred generally have been high. Fraser Watson is a hard man to please, but even he thinks something significant is going on in the old sport. After 86 balls of the run chase, with the Southern Braves still needing 29 to win a pulsating contest, Chris Jordan shaped up to put Jimmy Neesham into the stands. He contrived only to slice it to Josh Cobb at extra cover – a catch which essentially secured a second straight Welsh Fire win.

Dan Jervis . . . The Welshman Who Swims For GB, Wales, Grandad, Pastor Santos - But Mostly For God

Dan Jervis won’t be alone when he prays ahead of his Olympic debut in the 1500 metres freestyle event in Tokyo on Friday. Back in Neath, the congregation of Sardis Baptist Church have been on their knees for weeks hoping to invoke some divine intervention for one of their flock. Pastor Fortunato Santos has put Dan at the heart of his prayer chain in a bid to help him bring back some gold from Japan.

Bronze For Welsh Pair In GB Eight, Heartbreak For Vicky Thornley . . . Then Outrage And Anger From Wales' Josh Bugajski

Welsh rowers Oliver Wynne-Griffith and Josh Bugajski took a bronze medal in the men’s eight but there was another GB rowing near miss for Vicky Thornley in Tokyo – before Bugajski launched a furious attack on the sport’s former head coach. Wynne-Griffith and Bugajski were part of the men’s eight crew that battled to a third place finish behind Germany, who took silver, and new Olympic champions New Zealand. Thornley agonisingly missed out on a medal in the women’s single sculls after finishing fourth in her final – the sixth fourth-placed finish for Great Britain this week.

Vicky Thornley is on course for a shot at another Olympic medal and is desperate to break the sequence of agonizing fourth place finishes for Team GB. The Welsh rower became just the third British female single sculler to reach an Olympic final – and the first for 25 years – after finishing second in her semi-final. Now, Thornley – who won a silver medal in the women’s double sculls with Dame Katherine Grainger at the Rio Games in 2016 - has her sights on a first ever British medal in women’s single sculls in the final on Friday morning. 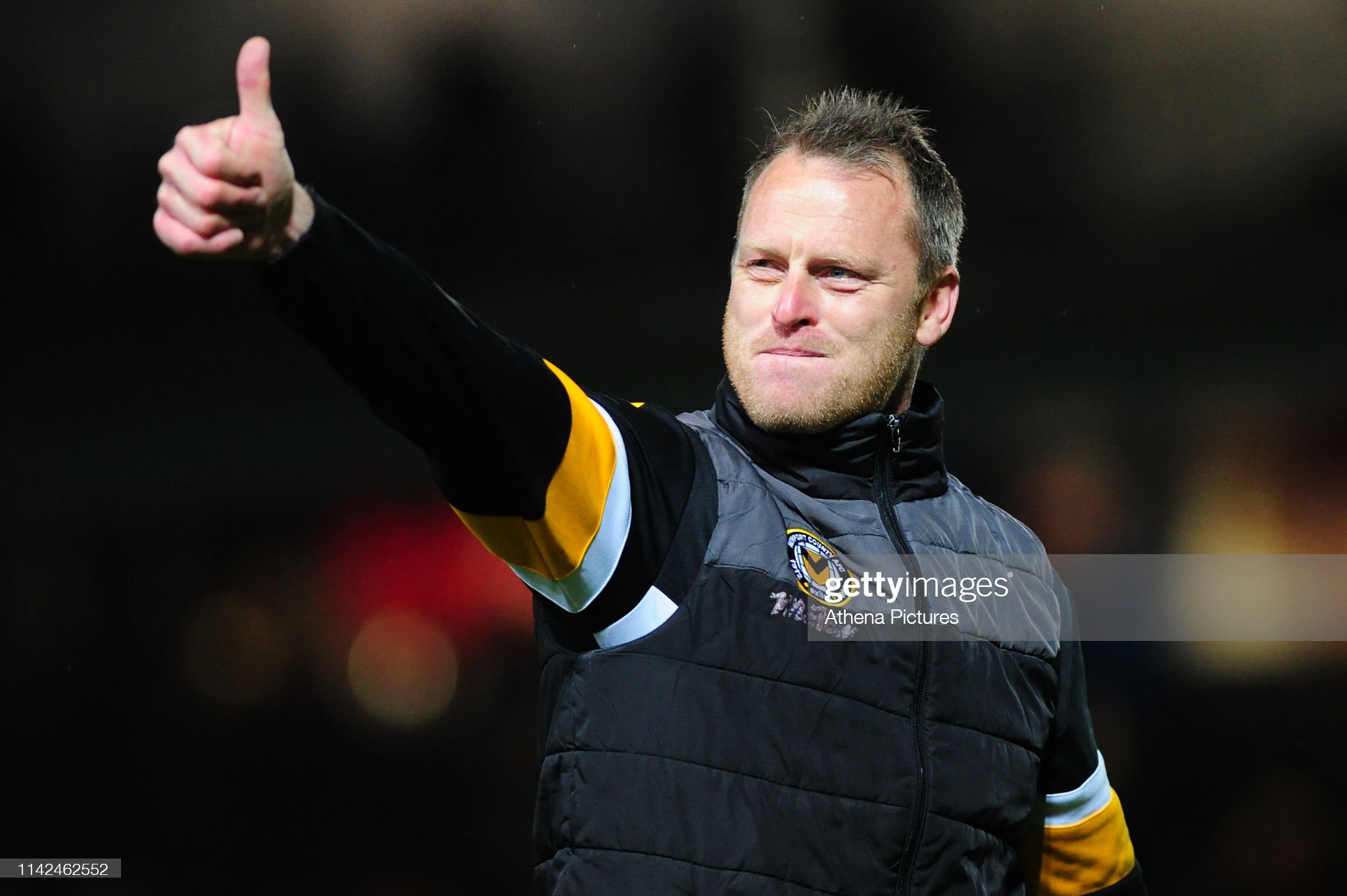 Joss Labadie has pledged to give his boss the perfect 40th birthday gift by getting Newport County back on the winning trail when they host Tranmere Rovers at Rodney Parade today. Michael Flynn’s men lost their unbeaten record at Cambridge last weekend, and top spot in League Two into the bargain,... Read More
17/10/2020EditorNo commentsDai Foot 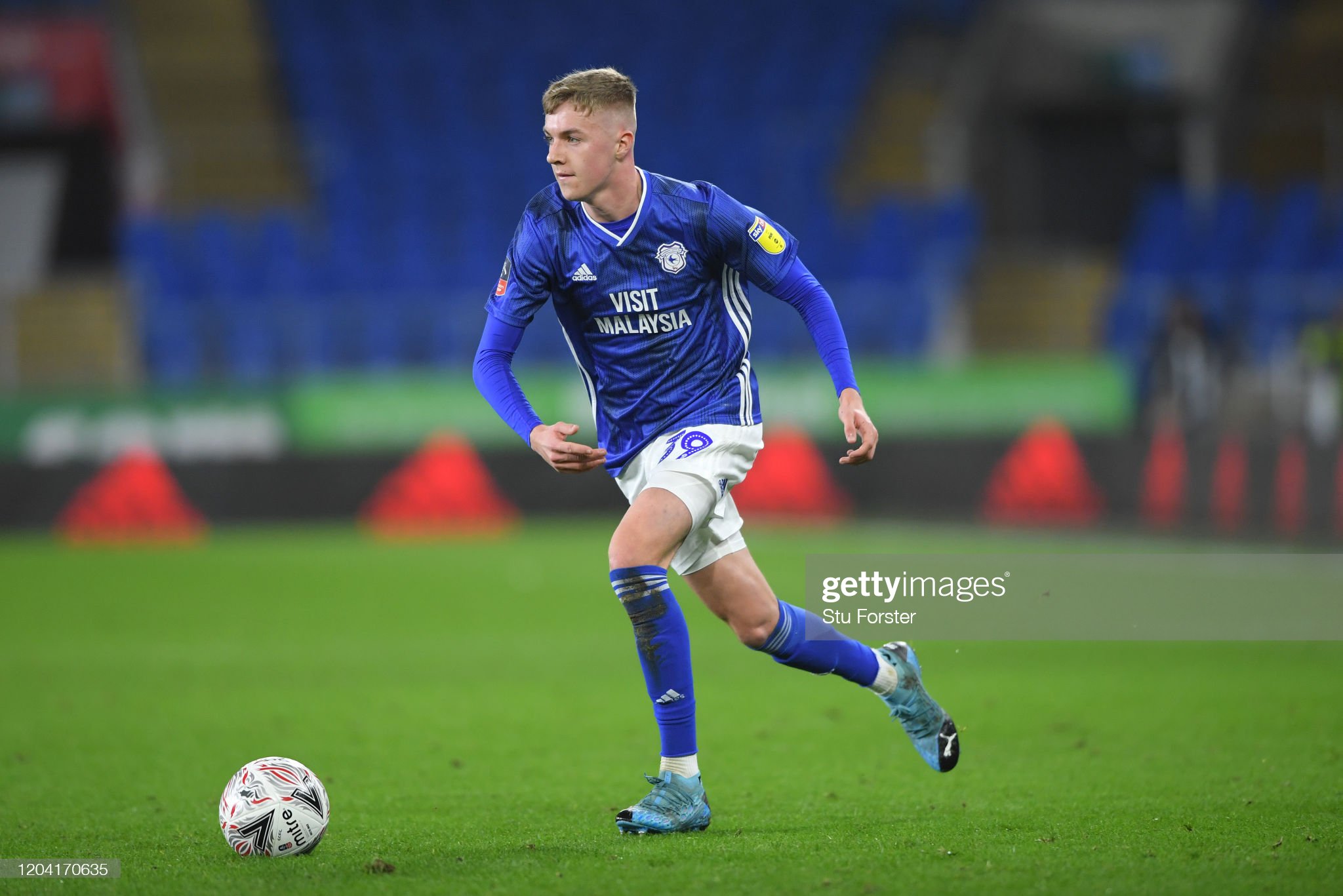 Former Cardiff City manager Neil Warnock is backing his old club, Notts County, to play-off success at Wembley Stadium - where one former Bluebird and one current loanee are set to play their part. Warnock twice led County to promotion via the play-offs three decades ago and now they take... Read More
2/8/2020EditorNo commentsDai Foot

Left-back James Jennings has called a halt to his three and a half year stay at National League Wrexham. Dragons’ manager Dean Keates was due to have contract talks with Jennings, but the Manchester-born defender has decided to move on. He has signed for Wrexham’s National League rivals Stockport County... Read More
22/7/2020Terry PhillipsNo commentsDai Foot 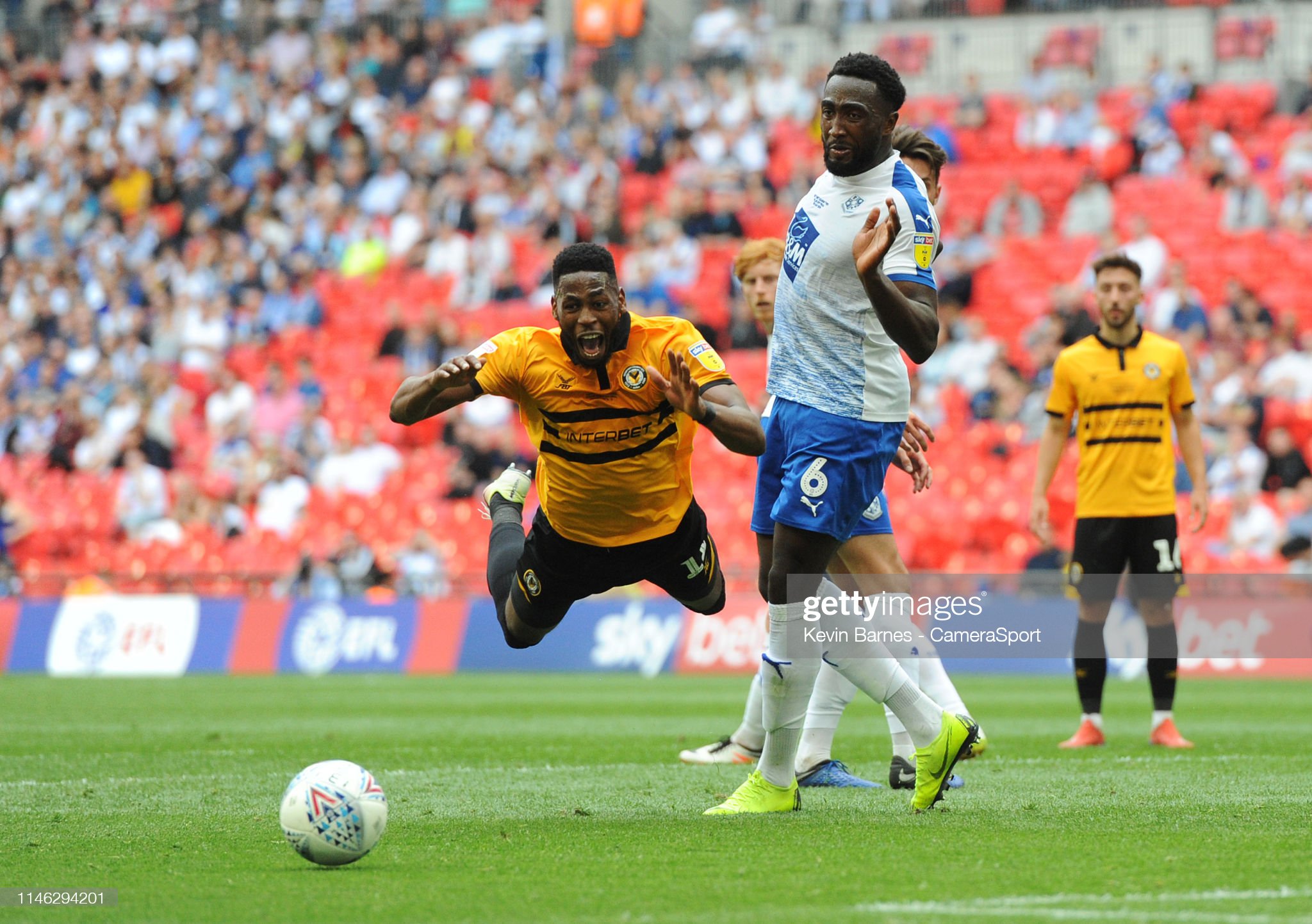 Amber Army Marched To The Top Of The Hill . . . And Down Again, But The Duke Of Pill Will Return

Newport County will start the 2019-20 season in League Two, exactly the same place where ended this season. No promotion, no hike in the club’s income and no bigger stage for the players and their ambitious manager Michael Flynn. But Callum Ellis believes he saw enough at Wembley to be... Read More
26/5/2019Graham ThomasNo commentsDai Foot, Features 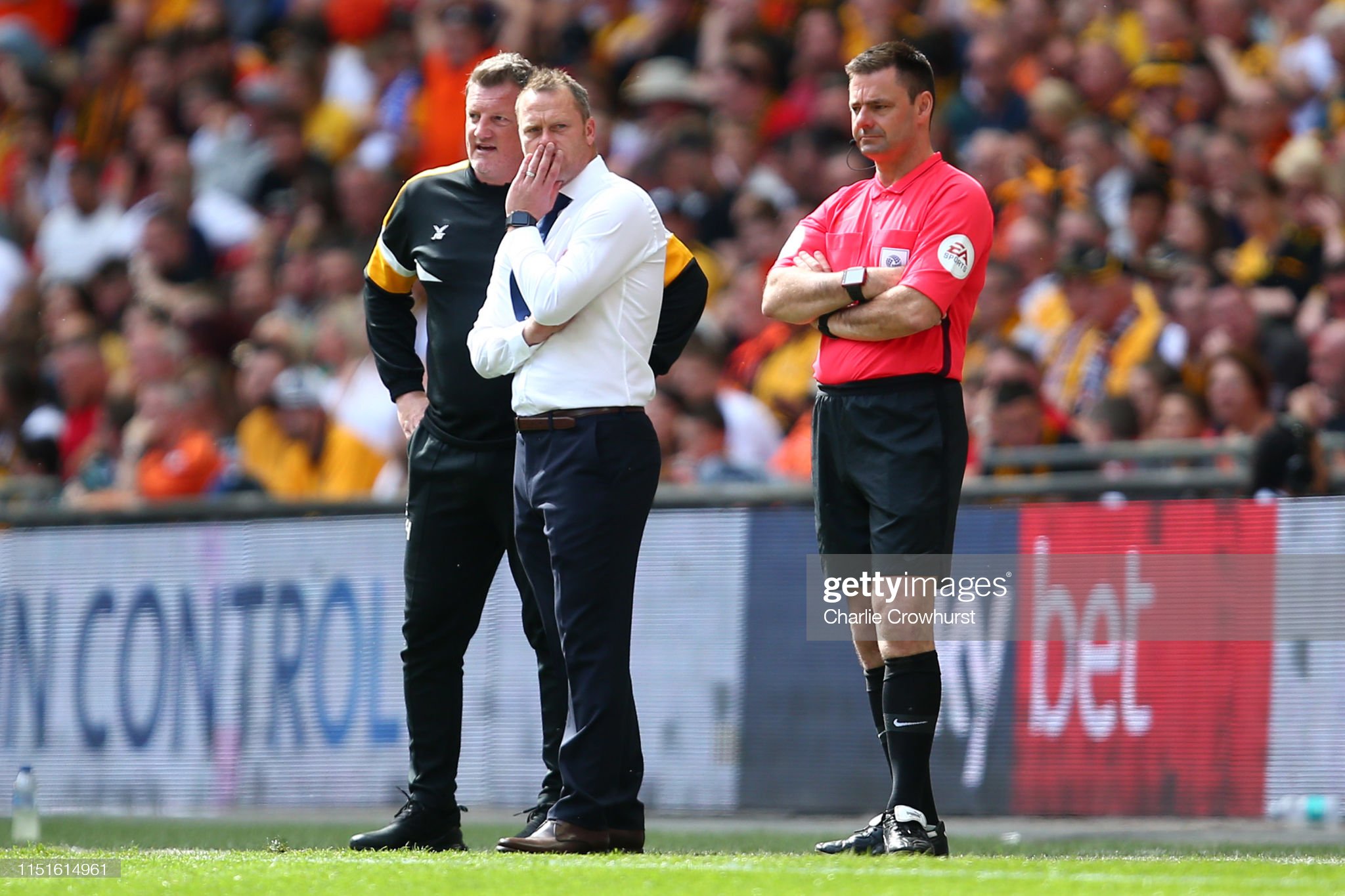 Michael Flynn gave a scathing verdict on EFL officials after seeing his battling but beaten Newport County side denied a place in League One next season. The County manager was furious that a key penalty decision went against his team as they lost their League Two play-off final 1-0 to... Read More
25/5/2019Graham ThomasNo commentsDai Foot 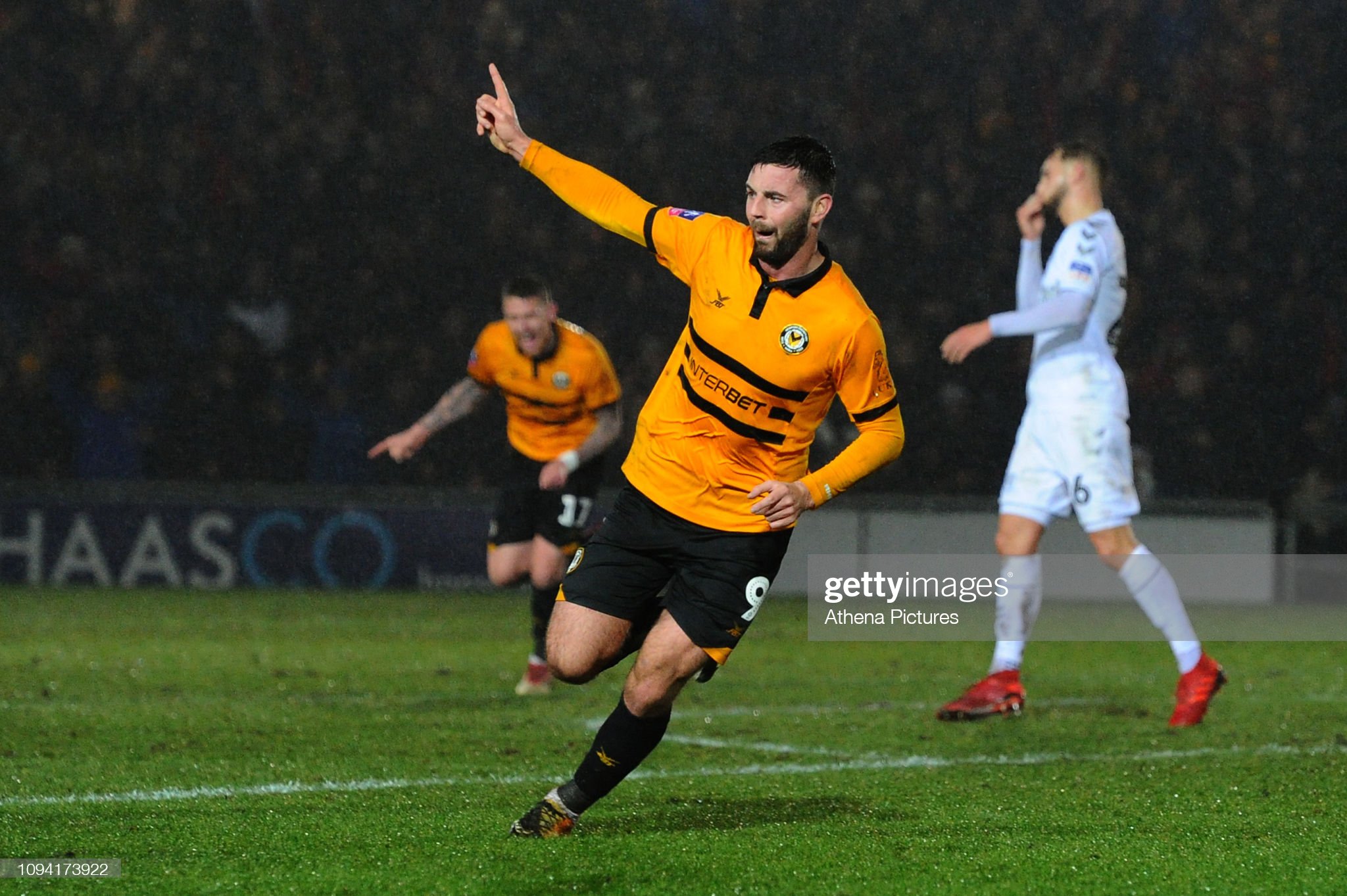 Padraig Amond Insists Michael Flynn Is Upwardly Mobile . . . And So Are Newport County

Padraig Amond believes Newport County manager Michael Flynn is destined for big things regardless of the outcome of today’s Wembley shoot-out. Amond will carry the goal-scoring duties as his club’s leading marksman when County face Tranmere Rovers in the League Two play-off final. For Amond and most of his teammates, promotion to... Read More
25/5/2019Graham ThomasNo commentsDai Foot, Features
Load More