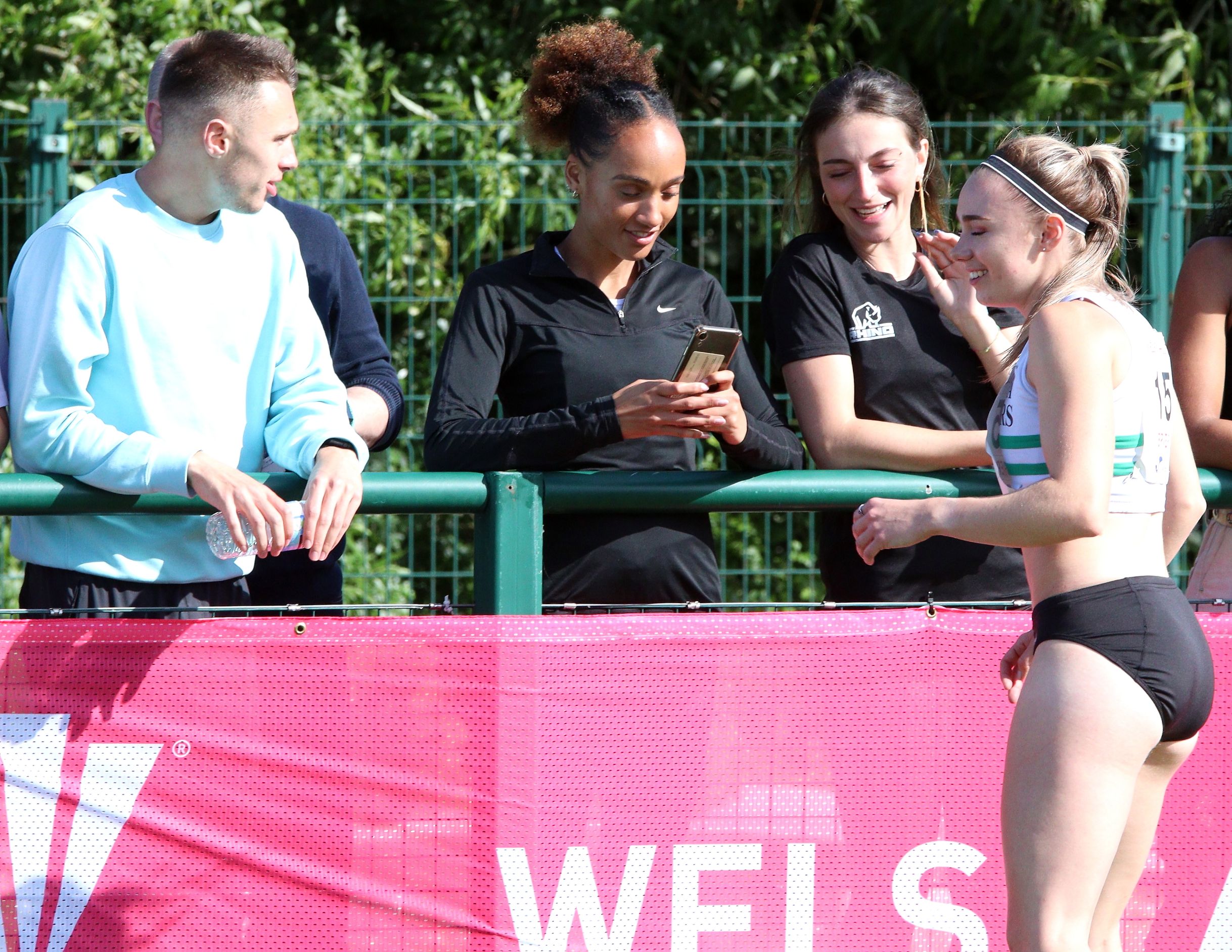 Joe Brier on the other side of the spectator barrier as sister Hannah celebrates her 100m Welsh title in Cardiff on Sunday. Pic: Owen Morgan.

In Geneva, on Saturday evening, Joe Brier ran the fastest 400m time by a Welshman in 13 years and then showed an equally impressive turn of speed to return to Cardiff by Sunday afternoon.

The Swansea Harrier wanted to be back in time to watch his girlfriend run in the 400m final at the Welsh Athletics Championships where he would also be cheering on his sister, Hannah, to the 100m title.

It had been something of a whirlwind few days for the Brier siblings, who were both named last Wednesday in the Welsh athletics squad for the forthcoming Commonwealth Games in Birmingham.

Joe then travelled out to Switzerland to compete in the Athletica Geneve World Athletics Continental Tour meeting on Saturday.

The Tokyo Olympian produced an excellent run to finish third behind American Trevor Stewart, clocking a new personal best of 45.56 – slashing 0.18 off his previous best set in Florida in April.

Speaking shortly after arriving at the Cardiff International Sports Campus, hot foot from Switzerland, Brier said: “It was a pretty high quality race and I came away with a PB, a European qualifying time, and fastest time by a Welsh runner in 13 years. So it’s very exciting.

“It’s been a bit of a busy one coming back this morning and getting over here, because I’ve got my sister running in the 100m final and my girlfriend in the 400m final. So, it’s been a busy day and a half, really.”

“My main goal this year – well, my main goal for the past eight years – has been these Birmingham Commonwealth Games.

“And now I’m in a position where I really want to push the boundaries and medal at the Games as well. So, it’s going to be an exciting one.

“Obviously, I’ve got a European qualifying time as well. I want to go there, I want to make a final and I want a medal there, too.

“I think I’m ranked sixth in Europe at the moment. We’ve got Matt Hudson-Smith, who is running about 44.3 – he’s ahead of everyone by about a second –  then there’s probably two tenths between the second ranked athlete and where I am at the moment.

Great Britain’s resurgence over the 4x400m relay could mean even more major championship racing on the way for the man who made his Olympic debut in Tokyo last summer.

“Britain’s men’s 4×400 is on the up. It’s looking really exciting at the moment with myself, Matt, Charlie Dobson and Alex Haydock-Wilson.

“Unfortunately, we haven’t yet qualified a 4×4 for the World Champs, but hopefully we can go out there for the mixed relay and bring home a medal.”

If he thought he was going to have a rare quiet afternoon spectating at the Welsh championships, Brier was soon put to work despite not having packed his spikes.

Organisers called on him for medal presenting duties, including handing out two golds to fellow Commonwealth Games athlete Adele Nicoll.

Brier was more than happy to oblige and is equally keen to try and spearhead a return to the glory days of Welsh 400m running.

You only need a cursory glance at the all-time Welsh 400m ranking list for names like Iwan Thomas, Tim Benjamin, Jamie Baulch, Dai Greene and Brier’s coach, Matt Elias, to jump out at you.

“I do feel a lot of pressure,” says Brier, who now sits fourth in that list.

“I feel like everyone is putting their hopes into me for 400m running in Wales, but you know, I’m here to accept it. I want that pressure, I want to run and run well with all the pressure.

“Obviously, you’ve got the likes of Iwan Thomas, Jamie Baulch and Tim Benjamin ahead of me in the Welsh rankings and they’re all great runners –  Commonwealth, European and world medallists, so I just want to put my name in there with them, basically.”

What better event to cement his place amongst Wales’ best ever one lap runners than at a Commonwealth Games, just over the border in Birmingham?

Especially with his big sister attending her second games and a legion of family and friends watching.

Brier says: “It’s definitely fun to have Hannah there as well. It’s going be exciting for both of us.

“I may be wrong – but I don’t think a brother and sister have gone to the Commonwealths as part of the athletics team for Wales. So that’s quite exciting.

“It’s going to be good. Our parents are obviously happy for both of us and hopefully we both perform well at the Games as well.

“As soon as I ran my qualifier, my mum entered the ballot and got loads of tickets.

“Then, as soon as Hannah got nominated, mum took the risk and got loads of tickets for 100 and 200 as well!

“I think the whole family’s going to come up to watch. So that’s going to be quite cool.”