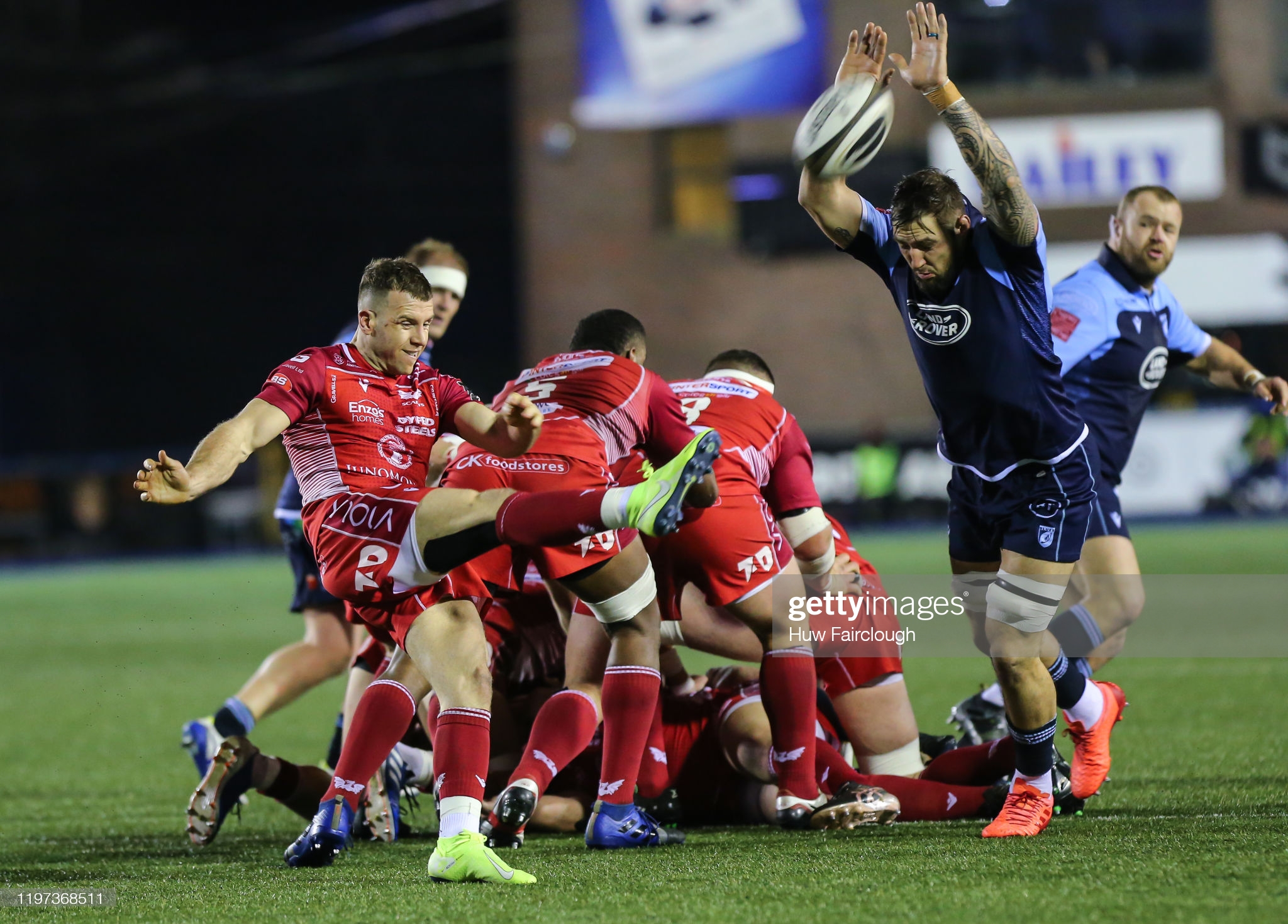 Josh Turnbull tries a charge down as Gareth Davies kicks for the Scarlets against Cardiff Blues. Pic: Getty Images.

The Scarlets host Cardiff Blues on Friday night in a repeat of their showdown of a fortnight ago. That game ended with victory for the Blues and proved a spicy one with Liam Williams receiving a red card. The Blues’ former Scarlet Josh Turnbull reckons part two could be just as eventful, as he told Graham Thomas.

Josh Turnbull admits there will be hunger on both sides when the Scarlets host Cardiff Blues on Friday night – but insists no-one will be looking to take a bite out of sidelined Liam Williams.

The two regions sit down for second helpings just two weeks after tucking into each in a bruising, pulsating battle at the Cardiff City Stadium where Wales full-back Williams was sent off, before the Blues claimed a 29-20 victory.

The Scarlets player was shown a red card for leading with his head at a ruck and striking the head of Shane Lewis-Hughes, so will be absent for the first game of his three-match ban.

Former Scarlet Turnbull is predicting another eventful clash – which is live on S4C – but says: “Liam understands what he did.

“It was clumsy and he will probably have looked back at it and think he could have done better in that area of the field.

“Shane is a tough Rhondda boy, he’s had a pretty impressive last few months, and that will have been water off a duck’s back to him. It is what it is and we’ve all moved on from it.

“But to be truthful, there was quite a bit of bite on the field last week, which is a good thing if I’m honest. It’s obviously competitive because you’re playing against your mates and there’s also the fact that selection for the Six Nations is now on the line.

“Boys were trying to make an impression, but that’s healthy, and we had two star-studded back lines that wanted to get on top of the other.

“Red cards often have a massive effect on a game, but if I’m honest I thought our half-backs controlled the game a little bit better and we deserved it.”

Wales back rower Turnbull, who spent seven years at the Scarlets before moving to the Blues in 2014, had to deal with his own red card earlier in the season.

Again, he was found guilty of leading with his head – this time against Zebre in October – but his card was considered by most pundits to have been at the harsh end of the spectrum.

Even so, he says: “Referees have to go through a framework now, as I know well. Safety is paramount and the responsibility is with the player.”

Turnbull expects the Scarlets to be thirsting for revenge as both sides play their final Guinness Pro14 derby before the Six Nations begins – enough for the home region to possibly call for reinforcements in the shape of skipper Ken Owens.

The Wales hooker has been sidelined for three months with a shoulder injury, but if he makes it that will only raise the intensity of the east v west rivalry.

“These games against the Scarlets are the ones I look forward to most in the season,” adds Turnbull.

“You’re playing against your old team and you want to prove a point. I have lots of good friends at the Scarlets, I still live in Cross Hands, and Ken lives only five minutes from me so there’s always some good banter to be had with him.

“I’ve keen telling him he’ll be wrapped in cotton wool again, but he’ll probably now come out all guns blazing.”

An added source of intrigue will be the presence on the sidelines for the first time of Dai Young who will take charge of the Blues, having returned as their director of rugby.

Young had already made the move from the Arms Park to Wasps by the time Turnbull arrived in the capital, but the 32-year-old reckons his new boss will make an immediate impact.

“He has a certain presence about him. I wouldn’t say the players are on edge, but they know he has certain demands of the environment. Everyone wants to make a positive impression.”

Also wanting to make their mark at Parc y Scarlets will be any player with hopes of playing for Wales this year, whether they are in, or have been left out, of Wayne Pivac’s squad.

Turnbull last played for Wales against Argentina in 2018, but has not closed the chapter voluntarily after 10 caps.

Will the Scarlets get their revenge? 🔥

“I would never turn down the opportunity to play for Wales – ever. If I was doing the right things and they felt I was making a positive impression, then I’d always put myself in the mix. It’s a privilege to wear that red jersey.

“But the good thing is that there is a genuine strength in depth in Wales now that maybe wasn’t quite there in the past.”